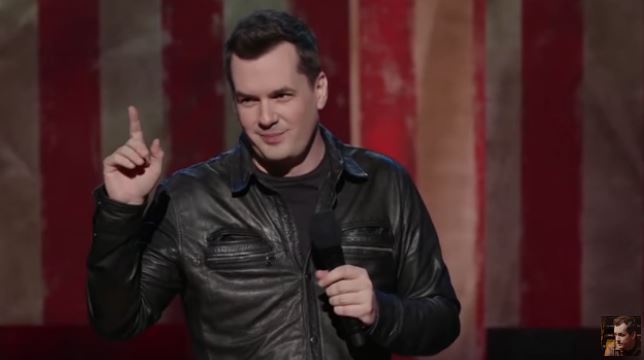 Jim Jefferies will soon bring his liberal humor to the late night scene. It begs the question ... why?

Comedy Central is your one-stop shop for Republican-bashing humor.

It’s been that way for some time, dating back to Jon Stewart’s tenure at The Daily Show. It blossomed with The Colbert Report, even if that tradition couldn’t keep Larry Wilmore employed via his Nightly Show.

Even the channel’s Broad City did what it could to drag Hillary Clinton over the finish line last year. Spoiler alert: It failed.

Now, the comedy network plans to add a new voice to its lineup: Jim Jefferies.

Who’s Jim Jefferies? He’s the Aussie comic showcased in the HBO special I Swear to God as well as his 2016 Netflix special Freedumb. Jefferies also created Legit, a dramatic series which ran for two seasons on FX.

The comedian’s 10-episode season will begin this summer. We’re told the show will “take on culture and politics,” truly bold terrain for a late-night comic.

“Plus, he’ll talk about Donald Trump because, unfortunately, there’s no way he can avoid it,” says the Comedy Central press release.

Yes, we’ve seen the channel’s programming and pretty much know what to expect. Or do we?

Here’s a hint: Jason Reich is both co-executive producer and head writer. You may know him from his recent credits: The Daily Show with Jon Stewart and Full Frontal with Samantha Bee. Is there any chance right-of-center views will get a fair hearing with Reich behind the wheel?

It’s still Jefferies’ show, after all. And he’ll have significant say in its content. So let’s sample some of Jefferies’ recent political tweets. See screen shots below: 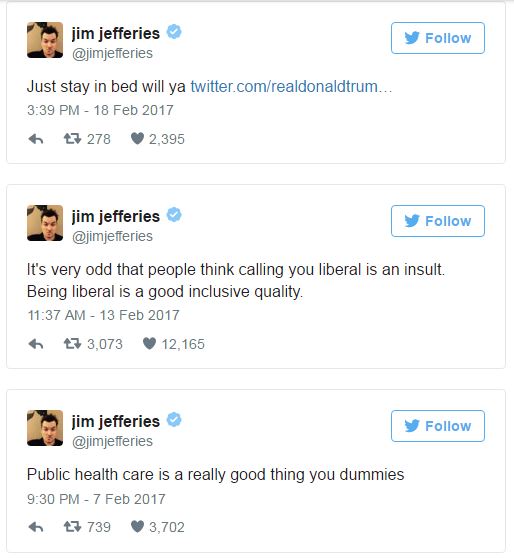 And, if you like comedians who traffic in hate humor (non-jokes teeming with venom) and insult their audiences, we’ve got a talent for you. (caution: adult language in the clip below)

Now, there’s nothing inappropriate with mocking the president. Of course, that essentially didn’t happen for the past eight years, but we digress.

“Gosh, if only we had just one more late night comic who reflected my worldview…”

Isn’t the far smarter bet to find that rare, right of center comedian and give him or her a late night show?

Sure, the media wouldn’t gleefully share those jokes as they do with Colbert and co. Still, red state America would flock to the program just to hear humor they can’t find anywhere else.

It’s called capitalism. See a void in the marketplace. Fill it. Count the cash. Now, can somebody whisper that economics lesson to the suits at Comedy Central?