This week on Morning Joe, the show’s liberal panelists have been working overtime not to cover one of the most significant stories that broke this past weekend. Namely, multiple journalistic outlets have revealed significant conflicts of interest at the FBI over the past two years that could have directly impacted agents’ investigations into Donald Trump, Hillary Clinton, and their respective associates.

However, you wouldn’t know this just from watching MSNBC’s top morning show. On both Monday and Tuesday, co-hosts Joe Scarborough and Mika Brzezinski and their guest pundits repeatedly trashed President Trump for drawing attention to this reporting about FBI corruption. None of the show’s panelists bothered to bring up recent stories from The Washington Post, The New York Times, Reuters, Business Insider, Fox News, or any other news organization that supported Trump’s claims. Instead, they preferred to attack the President’s tweets as more evidence of the threat that he purportedly poses to our “democratic institutions.” 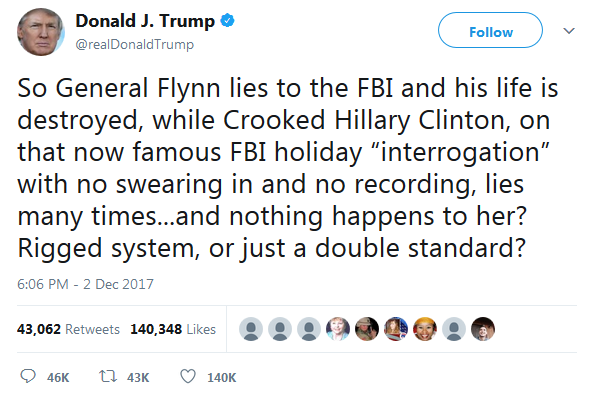 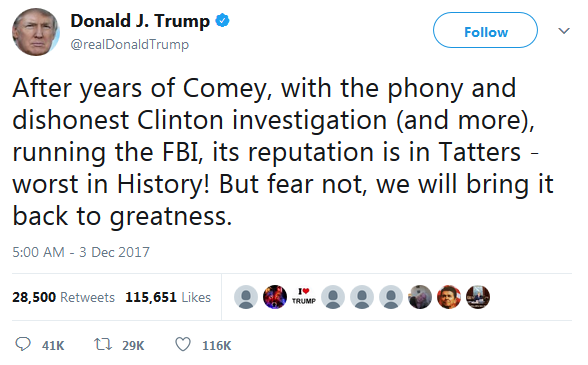 As anyone following mainstream media sources would know, Trump was referring to recent reports that one of the top FBI officials involved in Mueller’s current investigation of Trump was removed from his position this summer after it was revealed that he had serious political conflicts of interest related to the subjects of Mueller’s probe. Peter Strzok, the official in question, was reportedly caught sending politically charged texts to an FBI lawyer that he was having an affair with. According to The Washington Post, these texts indicated a clear animus towards Trump and, on the other hand, strong support for Hillary Clinton.

That wasn’t the worst of it though. According to The New York Times, Strzok was not merely involved in going after Trump – he was also the lead agent in charge of the FBI’s investigation into then-candidate Clinton’s mishandling of classified emails.

Any reasonable person should be able to understand why Trump would be upset by these revelations, right?

After looking at Trump’s FBI tweets from this weekend, Scarborough and company not only completely ignored the substance of Trump’s criticisms and the journalism backing him up, but more troublingly, they grandstanded on the memories of the 9/11 first responders to suggest that Trump was being unpatriotic and labelled Trump’s promotion of mainstream journalism as an “attack” on “democratic institutions” like the Intel community, the military, and...the press???

See the mental gymnastics for yourself (all times EST):

MIKA BRZEZINSKI: I want to get David Ignatius and Michael Schmidt to sort of frame exactly how, you know, Friday is in the big picture. But first, President Trump also laced into the Federal Bureau of Investigation in a string of tweets over the weekend, writing: “So General Flynn lies to the FBI and his life is destroyed, while Crooked Hillary Clinton,” wow, “on that now famous FBI holiday “interrogation” with no swearing in and no recording, lies many times...and nothing happens to her? Rigged system, or just a double standard?” James Comey said they had no basis to conclude that Clinton lied to the FBI. Trump tweeted more attacks, putting the “Justice” in “Justice Department” in quotation marks. And, quote: “After years of Comey, with the phony and dishonest Clinton investigation (and more), running the FBI, its reputation is in Tatters - worst in History! But fear not, we will bring it back to greatness.”

[starts his own monologue] 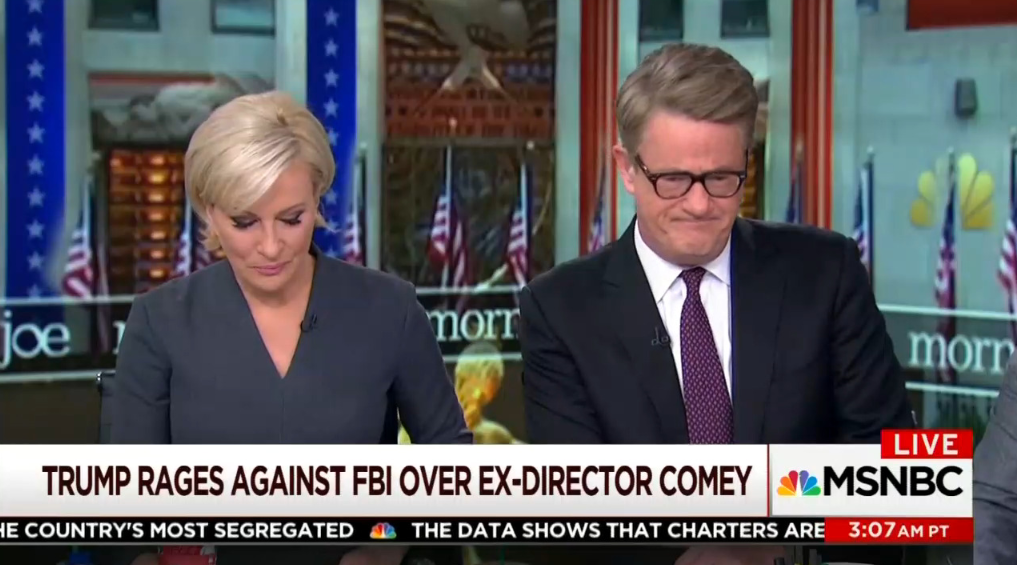 David Ignatius, every time the President attack, attacks the Federal Bureau Investigation [sic], I make sure to find a picture of 9/11 and everything that those FBI agents did, night and day and night and day, to investigate that and work alongside other Intel agencies to track down the people who were responsible for that, that heinous action. And, you know, those people -- I'm proud and thankful for the patriotic men and women who work in the FBI every day. Thank you for your tireless dedication and service to America. I recommend every American that hears this goes on their Twitter account or Facebook account and does the same thing. They keep us safe. And you look at Bob Mueller and the threats that Bob Mueller had to deal with in the days, weeks, and months after September 11th. This is, this is just nothing, nothing less than shameful from the President of the United States, who now owns the, quote, Justice Department.

DAVID IGNATIUS: Joe, I had the same reaction as you did to the “FBI in Tatters” tweet. Watching President Trump, you have a sense of someone caught in a trap, and the more he tries to get out of it, the deeper in he gets. If he flails one way and then the next, uh -- the attack on the FBI and its professionalism drew a very quick response from the person who represents FBI agents, who I'm sure Clint knows well, drew response from Mike Rogers, former FBI agent and well-known as a member of Congress. I just feel as if, for Trump, though, it must feel as if this is closing in on him week by week. And that's the only thing that can account for these strange tweets.

ADM. JAMES STAVRIDIS: I think it's rising steadily. And thank god for the FBI. You know, a lot of times people say to me after 37 years in the military: Thank you for your service. I appreciate it. There are a lot of ways to serve this country. Police, firemen, FBI agents, CIA, and to the FBI, I say: Keep clanking at Donald Trump like a Panzer tank, which is what Bob Mueller reminds me of. Because, we need to know the truth. Without fear or favor, we need to know the truth. I don't think the FBI's reputation is in tatters at all, and I don't think most Americans do either.

JOSH EARNEST: So, look, I'm not suggesting that bureaucrats are perfect or that bureaucrats are always effective in being able to get the job done, but what I am saying is that there is a common failure to appreciate that when you have a position of responsibility like President of the United States, there are consequences for your actions. When you're a real estate developer and you do things that are irresponsible or you want to attack people on Twitter, or you want to walk away from the negotiating table, there are no consequences for all that, or if there are, you can go back and fix them later.

EARNEST: But there are damaging consequences when you're the President of the United States and you say: You know what, I'm not gonna negotiate; I'm gonna walk away from the negotiating table. Or, you want to defame the intelligence community or FBI agents or our, uh,-

EARNEST: -the senior military leadership of the United States of America. There are consequences for that. And that’s, that’s, that's the bigita- -- that’s the biggest difference.

SCARBOROUGH: Um, we um, -- remember we warned Donald Trump during the transition -- we had a very rough 2016, but during the transition, there were a lot of people that went in, you know, that, you know, followed Bob Gates's advice. He's the only president we're gonna have. We all need to talk, pitch in, and see what we can do. You remember the warnings we gave him? Two warnings. I said: Listen, I know you like to fight people. I'm gonna tell you two areas you don't fight. Don't go to war with the Intel community and don't go to war with the press. You can be angry with ‘em. You can push back, but it’s always -- you always keep a detente with both of ‘em. And we told them that repeatedly.

BRZEZINSKI: No, I couldn’t [inaudible].

If Morning Joe had simply looked at some of Trump’s other tweets or retweets (such as the examples below), they would have figured out pretty quickly why Trump was attacking the FBI’s credibility – he was doing it based on perfectly mainstream sources. 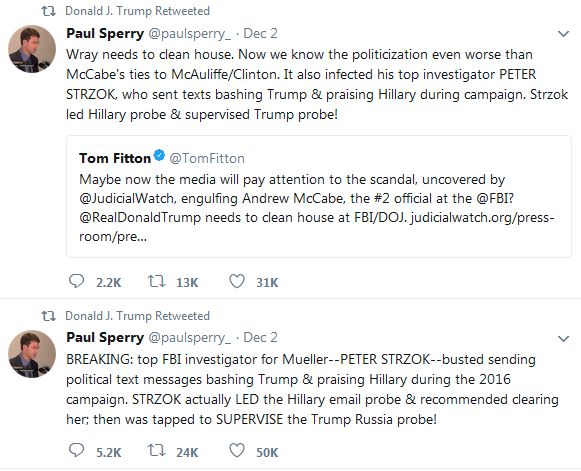 Neither Trump nor the press orgs that he is citing are “going to war with the Intel community” for calling the American public’s attention to serious problems within our intelligence services, let alone threatening any “democratic institutions.”

Morning Joe’s hyperbolic and hypocritical dismissal of uncontested reporting by mainstream papers in this case shows just how far Scarborough and his compatriots are willing to go to demonize Trump.

Apparently, there are no limits in sight.