NYT Op-Ed: I Feel ‘Guilty’ Calling For ‘Sacrifice’ of Al Franken , ‘I Adore Him’ 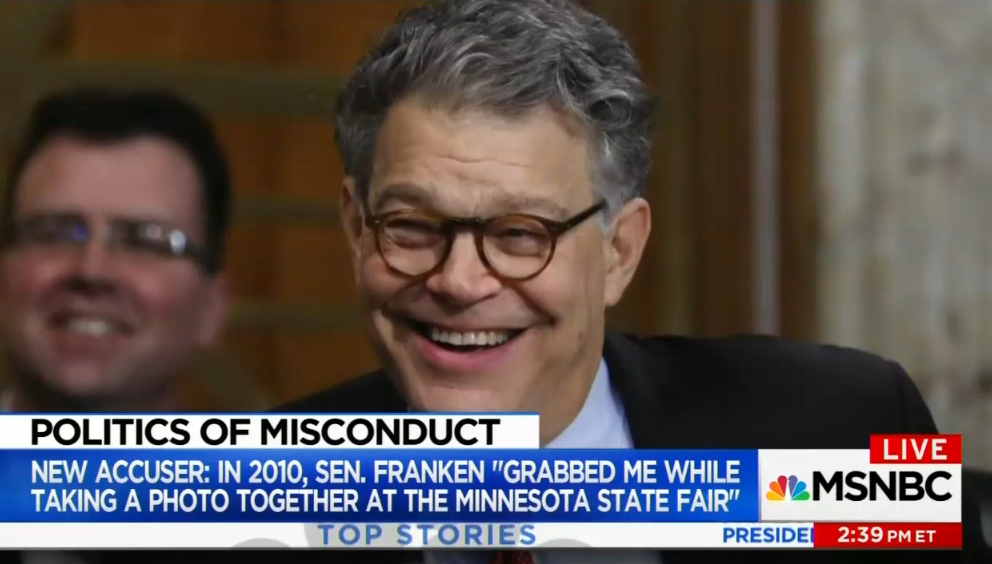 Last week, New York Times columnist Michelle Goldberg wrote an op-ed calling for Al Franken to resign in light of radio broadcaster Leeann Tweeden’s claims that the Democratic senator sexually assaulted her multiple times while on a USO tour to the Middle East to entertain American troops back in 2006. However, on Monday, Goldberg published another piece retracting her original call for Franken to be replaced. She primarily based her new argument on the grounds that Franken’s support for “women’s rights” should preclude him from being subjected to feminists’ purported standards for alleged sexual abusers. Goldberg also fretted that getting rid of the senator at this point would set a dangerous precedent that would “risk unilateral disarmament” for Democrats in the political arena.

Goldberg started off her latest piece by diminishing Tweeden’s claims and expressing regret that she had written her initial article in the first place [emphasis my own]:

Last Thursday, after a photograph emerged of Senator Al Franken either groping or pretending to grope a sleeping woman, Leeann Tweeden, with whom he’d been traveling on a 2006 U.S.O. tour, I wrote that he should resign. Almost as soon as it was published I started having second thoughts. I spent all weekend feeling guilty that I’d called for the sacrifice of an otherwise decent man to make a political point.

Then I saw the news that a woman named Lindsay Menz accused Franken of grabbing her butt while they posed for a photo at the Minnesota State Fair in 2010, when he was a senator, and I read Franken’s lame non-denial: “I feel badly that Ms. Menz came away from our interaction feeling disrespected.”

Yet I am still not sure I made the right call. My thinking last week, when the first accusation emerged, was: cauterize the wound. It doesn’t matter that Franken’s transgression wasn’t on the same level as the abuses that the Alabama Senate candidate Roy Moore or Donald Trump have been accused of. That photo — the unconscious woman, the leering grin — is a weight Democrats shouldn’t have to carry, given that they’ve lately been insisting that it’s disqualifying for a candidate to grab a woman sexually against her will. It seemed cruel to expect Democratic women to make Jesuitical arguments that the shadows under Franken’s hands meant he wasn’t really touching Tweeden’s chest. Especially since, with a Democratic governor in Minnesota, the party would maintain control of Franken’s seat.

Based on the above, it seems quite evident that Goldberg’s main concern has not been applying moral principles in any sort of even-handed manner, but rather politically posturing to make sure that Democrats won't lose a Senate seat.

Goldberg followed up her candid admission of partisan ideological intent by expressing her profound personal admiration for Franken [emphasis my own]:

But even as I made the case for resignation, I was relieved that it seemed as if Franken might stick around, because I adore him as a public figure. It’s easy to condemn morally worthless men like Trump; it’s much harder to figure out what should happen to men who make valuable political and cultural contributions, and whose alleged misdeeds fall far short of criminal.

The Department of Justice’s official website defines sexual assault, which is a crime, in the following way:

Sexual assault is any type of sexual contact or behavior that occurs without the explicit consent of the recipient. Falling under the definition of sexual assault are sexual activities as forced sexual intercourse, forcible sodomy, child molestation, incest, fondling, and attempted rape.

This definition quite clearly includes what Franken has been accused of doing so far, namely: shoving his tongue down Leeann Tweeden’s throat, grabbing her breasts, and also grabbing Lindsay Menz’s butt at a Minnesota State Fair. Does Goldberg, a self-described “feminist Jacobin,” really think that sexual assault doesn’t qualify as a criminal offense? Taking her at her word here, apparently she does not.

The NYT piece continued on as Goldberg made the case that conservatives must be sexually abusing tons of women, but no one reports it because the right-wing doesn’t care about “gender equality”:

It’s not a coincidence that the post-Harvey Weinstein purge of sexual harassers has been largely confined to liberal-leaning fields like Hollywood, media and the Democratic Party. This isn’t because progressive institutions are more sexist than others — I’m confident there’s at least as much sexual abuse in finance as in publishing. Rather, organizations with liberal values have suddenly become extremely responsive to claims of sexism. Feminists, enraged and traumatized by Donald Trump’s election, know they can’t expect accountability from Republicans, but they’ve forced it from people who claim to share their ideals. As a result, it sometimes feels as if liberal institutions are devouring themselves over sex while conservatives, unburdened by the pretense of caring about gender equality, blithely continue their misrule.

After years of feminist activism encouraging claims of sexual misconduct made by women to be taken at face value with no skepticism or further investigation, it’s not really surprising to see that liberal women are actually taking these new moral imperatives to their logical conclusion and actively reporting their bosses and co-workers in the news and entertainment media. What else could be expected? Should women just shut up when their alleged abusers are influential supporters of feminist causes? Goldberg did not go quite that far, but in a dizzying display of immensely hypocritical rationalization, she did close out her piece by calling for protecting Democratic politicians like Al Franken from the natural consequences of her and her compatriots’ activism. In her conclusion, Goldberg argued that feminists shouldn’t necessarily toss aside men that they “need, admire,” and “love” just for having committed sexual assault as long as those same abusers have supported feminist causes [emphasis my own]:

It’s possible that feminists, in trying to hold Democrats to standards that they wish were universal, risk unilateral disarmament. Kate Harding made this case in The Washington Post last Friday, arguing against Franken’s resignation. If Democrats “set this precedent in the interest of demonstrating our party’s solidarity with harassed and abused women, we’re only going to drain the swamp of people who, however flawed, still regularly vote to protect women’s rights and freedoms,” she wrote.

It’s a strange political fiction that anyone can really separate partisanship from principle. In general, the character of the party that controls the government has a much greater impact on people’s lives than the character of individual representatives. Those who care about women’s rights shouldn’t be expected to prove it by being willing to hand power to people devoted to taking those rights away.

Ultimately, however these dilemmas play out, we lose: either the moral high ground or men whom we need, admire and maybe even love.

As disturbing as Goldberg’s article is to read, it serves as a perfect example of the hypocrisy of liberal feminist activists – they have no problem with defending their political fellow travelers by minimizing accusers’ charges, denying the existence of an entire category of legal criminal activity, and even expressing their undying love towards people they themselves believe to be sexual predators. The only requirement for purchasing such unqualified love from feminists is to be superficially “pro-women” in public. What a bargain!

If Goldberg’s way of processing the Franken allegations is any indication of how liberal journalists think more broadly about sexual assault accusations against their political allies, then the recent reports that Charlie Rose and NYT's own Glenn Thrush had their sexual misconduct covered up or excused for years by their colleagues start to become a lot more credible.