After trying to pin the Charlottesville violence on President Trump, Moser went on to label all Trump supporters as alt-right, then adding:

The storm troopers and meme-wielders of the ‘alt-right’ (not to mention the ‘new right’ and ‘alt-light’) no longer get to define themselves by cutesy names designed to obscure their neo-Nazism. And, if facts still mean anything in America, Trump will also be recognized henceforth for what he is: the chief recruiter and Dear Leader of a gang of domestic terrorists.

Moser then preemptively disregarded whatever statement of condemnation the President may provide, saying “In the coming days and weeks, Trump will undoubtedly take pains to clean up the mess he left on Saturday. He will get on script and echo the sentiment belatedly tweeted by his daughter, Ivanka, on Sunday." 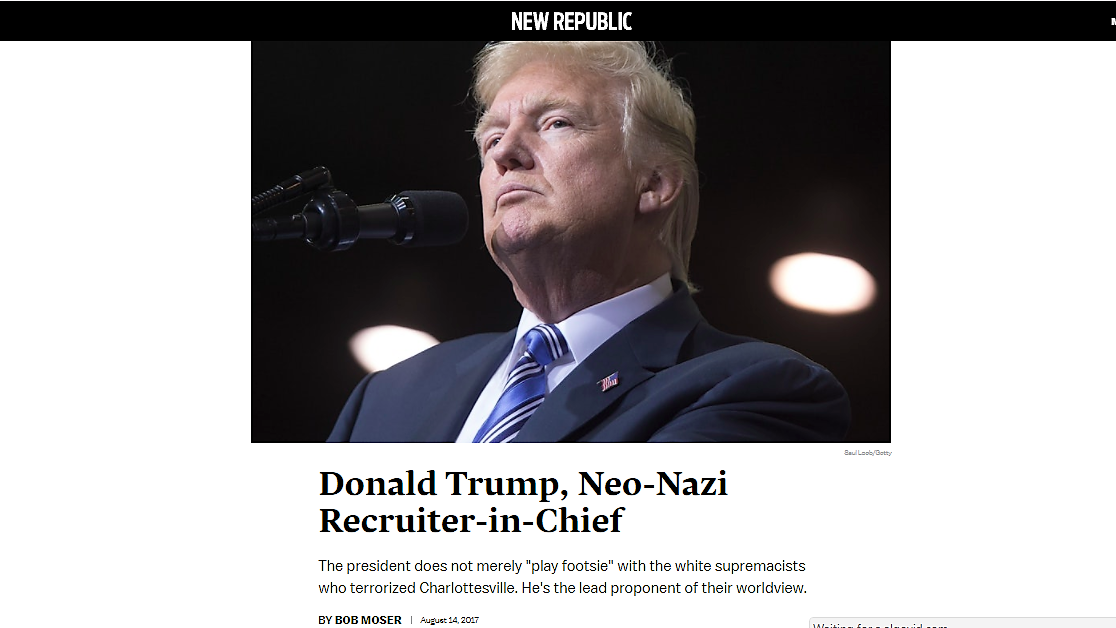 He quickly quipped on the White House staff, saying that Trump “may even symbolically purge his administration of some of its leading white supremacists: Steve Bannon, Stephen Miller, Sebastian Gorka, Kris Kobach. And a lot of people will be fooled. Some will continue to maintain, as Samantha Bloom did on Saturday, that “Trump’s not a supremacist.”

After the offensive, yet now too familiar, insults had run out, Moser went completely unhinged:

The president is the most powerful hate-monger in America. He is the imperial wizard of the new white supremacy.

But perhaps leaving the most offensive for last, he proclaimed:

To his supporters, and to himself, Donald Trump is the living embodiment of Hitler’s concept of Aryan Herrenvolk (‘Aryan Master Race’). He is our first neo-Nazi president. And until we acknowledge that unthinkable truth, and treat Trump’s presidency as the anti-democratic crisis that it is, he will not be the last.