In typical leftist fashion, during Monday’s Deadline: White House, host Nicolle Wallace, along with pundits Claire McCaskill and Charlie Sykes, hailed the partisan hearing held by Democrats to investigate the January 6th attack on the U.S. Capitol and claimed left-wing lawmakers were the only ones committed to discovering the truth. The only complaint about the politicized January 6th Select Committee came when McCaskill whined about how “there will be way too many people who don’t watch it.”

Earlier in the segment, Wallace and Sykes belittled Minority Leader Kevin McCarthy and other Republican leaders for “acting childish” with their refusal to support Nancy Pelosi’s sham committee. Sykes also glorified the committee, claiming it will tell the stories Republicans didn’t want the people to hear: “And I think that that's a point that needs to be made over and over and over again that these voices are being heard over the objections of Republicans in the Senate and the House.”

McCaskill, who plans to watch January 6th footage every Fourth of July with family, expressed that she fears too many people won’t tune in and watch the hearings:

But what I'm talking about are a huge swath of Americans that are not watching Fox, that are busy trying to figure out if they can afford to retire, or if their mother is being taken care of in the nursing home, and they are not paying as close of attention now. And what I'm hoping is once those people, once this starts hitting the airwaves, and once it starts coming up on social media we will pull back in the tens upon millions of Americans that know it was bad but maybe don't know how bad it was and hopefully the testimony – the dramatic testimony of Kevin McCarthy and or Jim Jordan will help with that.

In reality, the left is probably concerned about people watching the testimony because, without January 6th, they have little to discuss going into the 2022 elections in which the control of Congress is likely to flip. They certainly wouldn’t want voters to focus on rising COVID cases, crime rates, inflation, and illegal immigration.

The Select Committee is just political theater, but Democrats and their media allies will continue to push narratives fueled by emotion instead of addressing issues that affect the everyday lives of Americans.

This segment was brought to you by Expedia and Hyundai, click on the links to let them know what you think.

Below is a transcript of the segment, click “expand" to read:

NICOLLE WALLACE: You know, Charlie, as I’m listening to Jackie's reporting and have been reading it to catch up myself. These were not victimless crimes. The crime of lying about the insurrection left the law enforcement officials who the political affiliation was not known to anyone, still really isn't, but the trauma that was done to them happened on live TV. We all saw it with our own eyes, and for Republicans to have denied their heroics, to have denied the brutality, to have denied the gruesome nature of their beatings at the hands of Donald Trump supporters, is almost a crime on top of a crime.

I want to read something that one of the officers said about the pain physically and psychologically that he's been through. This is from somebody who has been on the show, Officer Gonell. Quote, I can be fine now and see or hear something and next thing I get tears and get emotional said Gonell, who was hurt when rioters tried to yank away his ballistic shield, threw a speaker at him, struck him in the face with a pole and sprayed him with chemical irritants. Quote, I tried to be strong, he said in the months following the riot. I tried not to show my emotion. But once, he said, he retreated to a quiet space at his home in Virginia, away from his wife and 9-year-old son, quote, I completely broke down. The horror and the disgrace of the Republican Party led by Kevin McCarthy's treatment of these officers will also be on display.

CHARLIE SYKES: It will and I expect that the testimony will be very, very compelling, will be very, very dramatic, and will, in fact, make it very difficult for the public not to recognize the assault on law enforcement. But you almost have to just, you know, recognize the incredible political karma of the way this is playing out, and Claire McCaskill is absolutely right when she talks about Liz Cheney's role and how strong she is going to be. Kevin McCarthy's goal was to exile her, was to make her a nonperson. And now, look, she's going to be the grown-up in the room. Adam Kinzinger is going to be the grown-up in the room while you have Kevin McCarthy out acting childish, you're also going to have counter-programming from some of the members of the Sedition Caucus who are going to be complaining about how unfair the victims we're treating.

If you wanted to choreograph the worst possible political scenario it's hard to do a better job than what Kevin McCarthy has done. Also, I hope that people, as they watched this testimony tomorrow, understand that all but two Republicans in Congress did not want you to hear this. Trump supporters have gone to the wall to prevent this hearing from taking place. And I think that that's a point that needs to be made over and over and over again that these voices are being heard over the objections of Republicans in the Senate and the House.

WALLACE: Oh Claire, that's such a good point. I hope that – I hope people heed Charlie's advice there. I want to just read some of the advice that this committee is getting, and I know that your former colleagues watched the kinds of things that you said on TV during the two impeachment trials, and I wonder -- I want to read it and then wonder if you agree with this advice. So this is from just security.

The Committee should consider the acts and omissions of executive and legislative branch entities and individuals, up to and including former President Donald Trump, his associates, and others involved in the runup to the events of January 6th and the use of disinformation to incite violence. Suggesting collection of this evidence is not to presuppose liability; but the country needs an accurate record, collected as contemporaneously to events as possible. Only by understanding all the factors that did or did not contribute to the attack can we hope to prevent similar attacks in the future. On that last point about the factors that could prevent similar attacks in the future, I'm sure it didn't air on this network, but the lies that inspired the insurrection were on full display at one of the sort of meccas for the big lie about the election by the ex-president. How much of this committee's work is about preventing the next January 6th?

CLAIRE MCCASKILL: Well, I hope a lot of it. You know, what I'm most fearful of is that there are way too many Americans that won't watch this hearing in progress, that won't take just a few minutes out of their time to listen to these police officers and understand what actually happened that day. Now the visuals are very powerful. Clearly, this was an angry, violent mob that was willing to break down the sacred doors of our nation's capitol and attack police officers in order to do Trump's bidding.

But the bottom line is, Nicolle, I'm afraid there will be way too many people who won't watch it, and I think the part that may be most compelling, that maybe we will get more people to watch, unfortunately, would be the testimony of Kevin McCarthy about the content of his phone conversation with Trump that day, or, importantly, the testimony of Jim Jordan who went to the White House and had a meeting about this in December, how they were going to do this on January 6th and have this big protest and push back on what is a pro forma event, counting the votes that had already been cast by the electoral college. So it is, I think, this is a really seminal moment to getting to the bottom of it. But with social media, what it is today, and the echo chambers that have been calcified, I'm most worried that the people who need to hear this the most will tune it out.

WALLACE: Well, I never disagree with my friend Claire McCaskill, but I think the people that are been brainwashed, they’ve already got them locked up. I mean, they’ve got those people, Claire. So, I mean the people that -- I mean, to Charlie’s --- But to Charlie's point,

MCCASKILL: No, I get that.

WALLACE: The people they didn’t want -- they don’t care if the Fox viewer has this happen. They've got those folks, right? I mean. 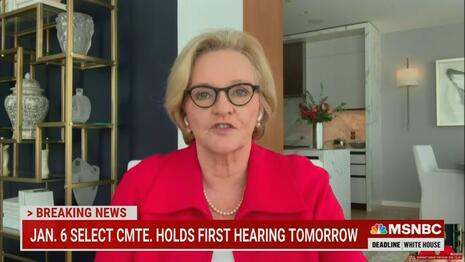 WALLACE: But – but – but what Charlie is talking about is reminding everybody else that this is something that McCarthy didn't want you to see. This is almost sort of elicit testimony in the view of McCarthy. McCarthy was for it until something happened. And if he's subpoenaed and Adam Schiff suggested that you know they'll start subpoenaing folks right away. Liz Cheney has already said Kevin McCarthy should be subpoenaed. Don't you think that is the kind of testimony that just might sort of be the kind of thing you can't -- political rubbernecking. Who’s going to look away from that?

MCCASKILL: Well, the people I'm really talking about here -- I get that the Trumpers are locked up and I get that there are a whole lot of people that are already convinced that the facts are pretty clear as to what happened that day, and they place the blame at the – at the – at the footsteps of Donald Trump. But what I'm talking about are a huge swath of Americans that are not watching Fox, that are busy trying to figure out if they can afford to retire, or if their mother is being taken care of in the nursing home, and they are not paying as close of attention now. And what I'm hoping is once those people, once this starts hitting the airwaves, and once it starts coming up on social media we will pull back in the tens upon millions of Americans that know it was bad but maybe don't know how bad it was and hopefully the testimony – the dramatic testimony of Kevin McCarthy and or Jim Jordan will help with that.