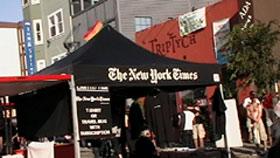 You won't believe it unless you see it with your own eyes.

On September 28, The New York Times sponsored a booth selling subscriptions at the Folsom Street Fair - the largest, raunchiest, most outrageous celebration of deviant sexual behavior in San Francisco, and quite possibly the world - but the Times refused to report on the event.

The fair features leather fetishists and devotees of bondage and sadomasochism. Men, mostly homosexuals, and a few women walk through the streets naked, or wearing little but chains and dog collars. Police look on, forbidden by city officials to enforce public decency laws. In fact, the San Francisco Police Department recruits at the event.

The Folsom Street Fair attracted more than 100,000 people this year. A spokesman for the fair told conservative activist Peter LaBarbera of Americans for Truth about Homosexuality that the event is the third largest annual outdoor event in California. At last year's event, LaBarbera took pictures of numerous men engaging in a variety of exotic sex acts right in the street, but the spokesman said officials were "cracking down" on public sex this year.

The New York Times doesn't consider this story newsworthy, though the fair raises serious questions about the values of the people who may win complete control of the federal government in the November elections. The Fair takes place in the district of House Speaker Nancy Pelosi.

The Times motto is "All the news that's fit to print." This must be the news the Times deems not fit to print. The presence of the subscription booth proves the paper was fully aware of the event.

The photo accompanying this blog was taken by Diane Gramley of the American Family Association of Pennsylvania, who joined LaBarbera in documenting the Folsom Street Fair this year.