In the Trump era, the media not only made the late John McCain a sainted figure. His entire family were saints. Attacking them was like an attack on the best that humanity has to offer. When reports emerged that White House aide Kelly Sadler said in the Senator's last weeks that his opposition to CIA director Gina Haspel was no longer relevant since he's "dying anyway," there was about a week of tooth-gnashing and garment-rending for political blasphemy. Sadler was tarred, feathered, and eventually dismissed. 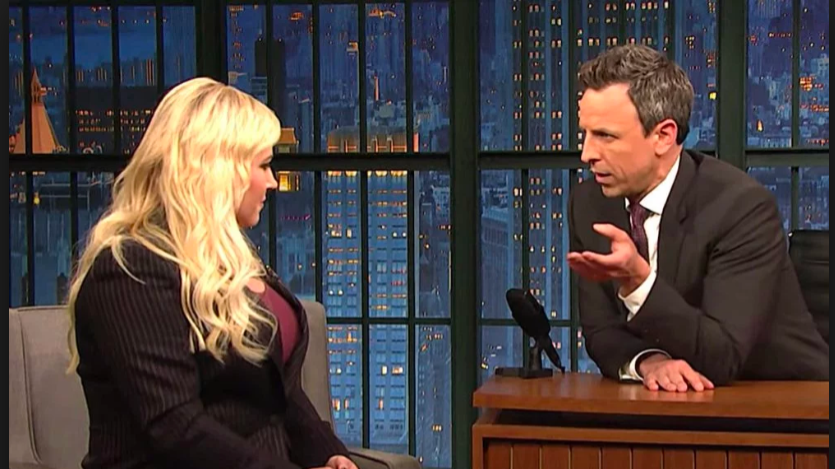 But this secular sainthood can quickly be rescinded. Meghan McCain says conservative things on television -- especially calling out the Left for anti-Semitism, saying the Democrats may be echoing Britain's Labour Party soon -- and so now she's getting thrown under the bus.

On NBC's Late Night on May 7, Seth Meyers interviewed this star of ABC's The View, and tried to shame her televised remarks taking on radical Rep. Ilhan Omar. Criticizing Omar was "unfair" and even endangering her safety.

"I do think it’s fairly dangerous and you brought it up after Congresswoman Omar had some death threats against her,” Meyers lectured. “She has obviously now stated that she needs to be more careful with her language, don’t you think other people who talk about her need to be more thoughtful as well? Or do you stand by those comments of tying her to this, her rhetoric to this synagogue shooting?”

Meyers is referring to an April 28 panel discussion on ABC's This Week, where several panelists insisted President Trump's rhetoric on immigration could be associated with the synagogue shooting near San Diego. McCain countered that we should pay attention to extremism on "both sides of the aisle" and recalled Omar's ugliest tweets about Jewish money and Jews "hypnotizing" the world. It's apparently not "dangerous" to the president when you try to tie him to a synagogue shooting.

When McCain refused to retract anything she said, Meyers objected he was trying to find "common ground." That's laughable. He was shaming. And he repeated himself. “I’m just someone who cares about the fact that there’s someone out there who is in a minority, who has had death threats against her, and I think that we should all use the same language,” Meyers said. “You’re asking her to be careful about her language, and I would ask everyone to be careful about theirs.”

When the president gave a primetime address talking about people like Kate Steinle who were killed by illegal aliens, Meyers tweeted the joke "Is this Oval Office SVU?"  Don't forget Meyers let a lesbian staff writer describe the Catholics on national television as guilty of "hosting a 2,000-year-long pedophile convention." How can he preach what he will not practice?

McCain insisted Omar's getting a lot of free passes, and Meyers brazenly supported that notion. “It's an interesting thing when we have two Muslim women for the first time [in Congress], they do have a different perspective on things...we have to listen to other people's perspective.” Does that sound like something Seth Meyers practices nightly on television? He's beloved by the Left for his vicious monologues....not for dialogue.

McCain asked the perfect (rhetorical) question: "Are you her publicist?" He is. But Omar has many others.