It's hard to fathom in this super-charged atmosphere but politics actually has been more tumultuous than it is today (See: War, Civil). On the other hand, the war to define, or better put, redefine American culture has never been more ferocious. It's militancy has reached the point that many on  the libertine-left media are aggressively, and quite publicly demanding parents abide by their world view or be ostracized from polite company. And what an ugly worldview it is. 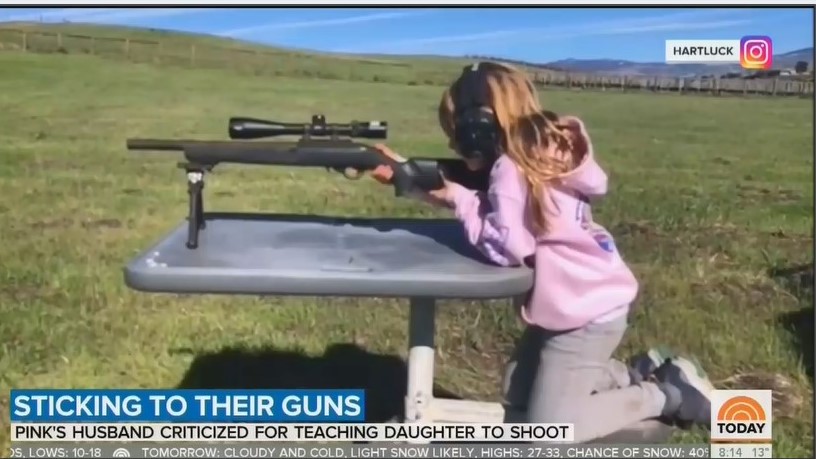 On January 31, NBC’s Today show devoted a segment to an allegedly controversial Instagram post by Carey Hart, an off-road truck racer and the husband of the pop star Pink. He posted a video of his seven-year-old daughter Willow shooting a long rifle at the range.

Hart wrote this caption: ““Haven’t poked the parent police bear in a few days. Willz and I shooting the 22 rifle. She is getting pretty good. Can hit a 12 inch (30cm) pie plate from 30 yards (27 metres). Started her shooting at 3yrs old.” Hart said his family doesn’t hunt, just shoots for sport. “I’m raising the kids with knowledge of firearms, how to handle them, shoot them, store them, and avoid them in uneducated hands. #knowledgeispower.”

NBC’s Kristen Dahlgren warned “The response was swift. One critic commented ‘So confused about how something that symbolizes violence and fear needs to be taught to children.’”

But Hart is doing just the opposite, as anyone who owns a rifle (which we suspect doesn't include Dahlgren or her "critic) knows: Anyone using a firearm is taught to be afraid of them, hence the proper handling.

Dahlgren quoted others praising the video, but then turned to the doctors. “Between 2012 and 2014 an average of 7,000 children were killed or injured by firearms each year. The American Academy of Pediatrics stance is guns should be locked, unloaded and away from where children find them.”

Now, really. Exactly who disagrees with the idea that guns should be kept from children, under lock and key? Is Hart guilty of that as well?

NBC's reporter also noted “This is not the first time Hart's parenting has been called into question. Over the years, he and Pink have shared photos of their family online and some images like these of Hart riding dirt bikes with their kids have created a storm of criticism.”

On screen, the graphics read: “STICKING TO THEIR GUNS: “Pink’s husband criticized for teaching daughter to shoot.”

What should parents be teaching instead?

Well ... on June 18, 2018, the same “Today” show promoted fifth-grader Desmond Napoles as a wonderful phenomenon. What's he done to deserve this? These were the words on screen will explain: “DESMOND IS AMAZING: 10-year-old ‘Drag Kid’ taking the Internet by storm.”

They are no longer drag queens. They are drag kids.

This is good parenting. 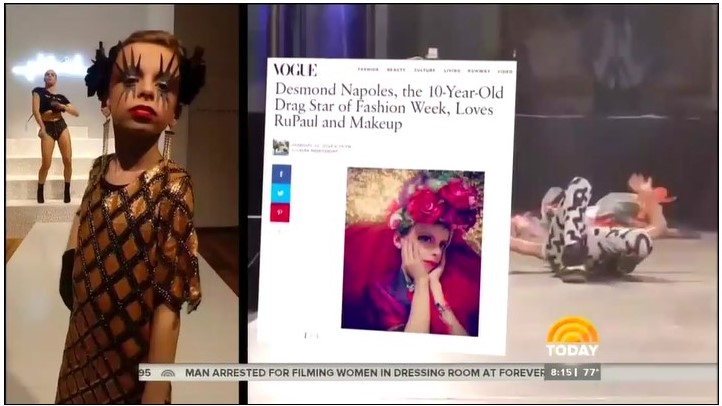 NBC reporter Kate Snow gushed: “Desmond is a self-described drag kid. When this Brooklyn fifth grader isn’t in school, he’s doing photo shoots and runway shows. He’s already been profiled in Vogue, and even has his own drag name. Desmond is Amazing.”

Snow explained “We met up with Desmond and his parents at the Phluid Project – a gender-neutral retail store in New York City. In contrast to their son, Wendy and Andrew Napoles say they couldn`t be more mainstream.”

Wrong. The mother said Desmond was “mesmerized” at age three as they both watched “RuPaul’s Drag Race,” a drag-queen competition, which aired then on the LGBT channel Logo.

Snow gently pushed back with what “people” might say, like “he’s only ten.” Desmond’s mom then uncorked this analogy: “Mozart first touched a piano when he was three. I think that there are talented children.  And if you see that talent and they want to do it, why not?”

....Unless they want to shoot guns.

Online, NBC oozed “Meet the 10-year-old ‘drag kid’ taking over social media with inspiring message,” and noted Desmond “is a smart, self-assured, and talented 10-year-old on the rise as a social media star” and he “hopes to continue promoting acceptance.”

In December, Desmond the “drag kid” did a dance number at a gay bar in Brooklyn called 3 Dollar Bill, collecting dollar bills from adult men in the crowd. NBC didn’t follow up to question the parents if this is “promoting acceptance.”

Does this make you want to celebrate -- or throw up?