Bozell & Graham Column: The Senate's an 'Unfixable Crime Against Democracy'?

MSNBC’s Lawrence O’Donnell revved up his Outrage Machine on Friday night, once it became apparent that Brett Kavanaugh was going to be confirmed to the Supreme Court. There was a new crime against democracy – or rather, there was a very old crime. It’s called the Senate.

Come again? Senators are elected, but since they voted to give Donald Trump a narrow victory, it can’t be democracy. The Founding Fathers designed a Senate that wasn’t elected by the people, but by the state legislatures. (Some regret the 17th Amendment changed that.)

O’Donnell lamented America’s never been worse: “And so the Senate is now deeply undemocratic and getting worse every single day. People who live in countries that have never really pretended to be fully democratic don’t feel the disappointment and sickness that Americans feel when democracy so obviously fails.”

Someone get O’Donnell a handkerchief and perhaps a textbook on how a republic operates. Like many Democrats, O’Donnell feels that the popular vote should prevail on everything. The Electoral College must be scrapped if Hillary Clinton won the popular vote -- she should be president.

Using the same peculiar calculations, liberals claimed that there are  now four Supreme Court justices appointed by Republicans who didn’t win the popular vote. Those geniuses forgot that George W. Bush nominated two justices after he won the popular vote in 2004.

But let’s return to O’Donnell just making things up, like John Belushi’s Animal House rant about the Germans bombing Pearl Harbor. He blathered: “An American realist knows that the federal government has never even tried democracy, not for one day. And so today in the United States Senate, the senators who represent 55 percent of the American people lost an important Senate vote, again.”

The MSNBC host was parroting a survey paid for by the taxpayer-subsidized liberals at NPR and PBS that found the 49 Senators opposing Kavanaugh represented 55.8 percent of the public.

This sentiment was ably mocked on Twitter by New York Yankees fans. In the 1960 World Series, the Yankees outscored the Pittsburgh Pirates 55 to 27...and lost the World Series. Their wins were blowouts. Theirs losses were close games. 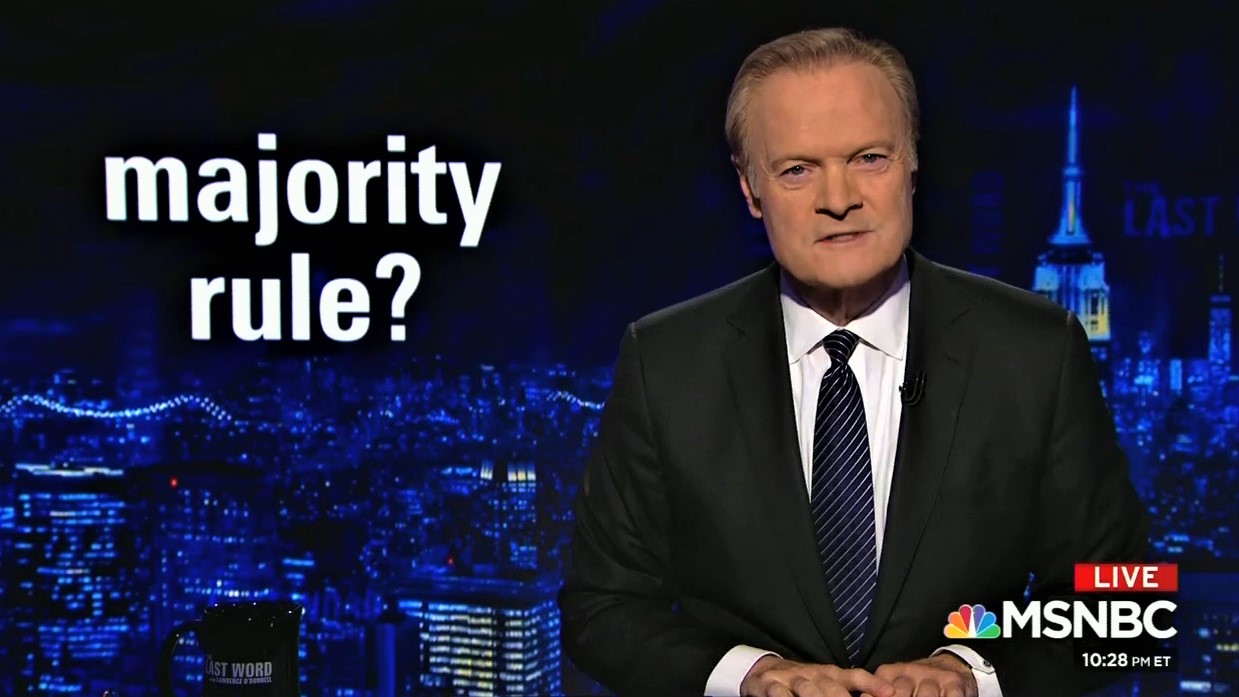 O’Donnell mourned that he used to be proud to work in the Senate a while back for Daniel Patrick Moynihan, but it slowly dawned on him that the Senate is “an unfixable crime against democracy,” perpetuated by a group of racist, sexist Founding Fathers. He lectured his liberal viewers to get out and vote, “the vote for United States Senate that the Founding Fathers never wanted you to have.”

Jim Geraghty at National Review pointed out more flaws in this analysis: “The second-least populated state in the union is Vermont, the 45th is Delaware; the 43rd is Rhode Island; and the 40th is Hawaii. All of those states have two Democratic senators.”

It’s obvious that Friday night felt a lot like Election Night 2016 to the liberals. What’s so upsetting to them is that the liberal media can’t successfully engage in mind control and run the country by chanting their baloney into the television set. MSNBC just hates that democracy in America doesn’t have enough of a liberal bias.