Twenty years after he recommended to Congress that President Clinton be impeached for perjury and obstruction of justice, Kenneth Starr has written a book about it. Surely, with the passage of time and many other books exploring the Lewinsky affair and the other Clinton scandals, Starr can be treated with dignity and respect.

Back then, he faced ABC’s Diane Sawyer calling his Starr Report “demented pornography,  pornography for Puritans.” 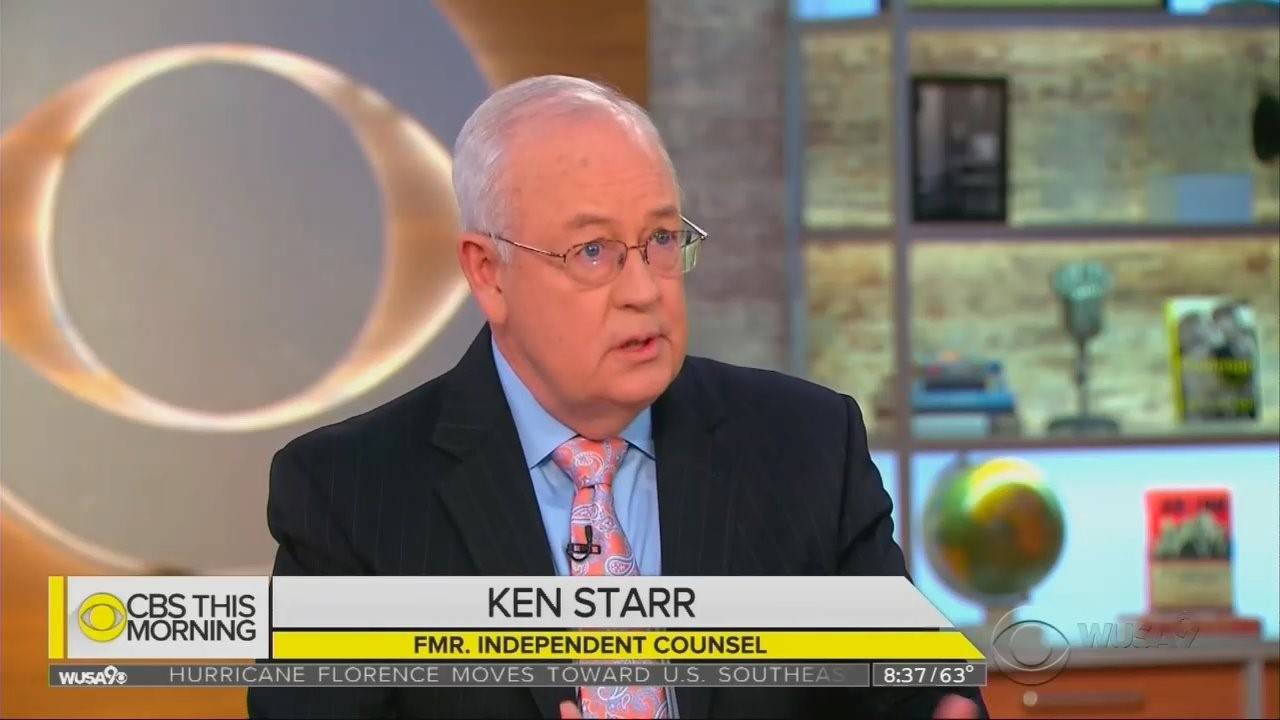 Twenty years later, nothing has changed. In a September 10 interview on CBS This Morning, anchor Norah O’Donnell brought up one of his lawyers: “ One of the things we've learned the Supreme Court nominee Brett Kavanaugh worked on your team, worked on this investigation of President Bill Clinton. He wrote and suggested some very explicit, salacious questions should be asked of President Clinton but you didn't agree to do that. Why?”

Starr reasonably replied “we wanted to respect the dignity of the presidency and I think that we did that. But at the same time, we had to get to the bottom of things.”

Here’s another way of putting this: Clinton said under oath there was no sexual relationship with Lewinsky. To CBS it was “very explicit” and “salacious” to ask Clinton about it.

O’Donnell also asked: “Monica Lewinsky has said the release of the Starr report, the 445-page report, was one of the worst days of her life. She wants an apology. Will you apologize to her?” Starr said “No, I won’t, because the facts are the facts.” It was a perjury investigation.

Another way of putting it: Why is CBS asking questions as ridiculous as Lewinsky’s demand?

Starr also was interviewed that morning on NPR’s Morning Edition. Anchor Steve Inskeep, best known for long, warm, fuzzy White House chats with President Obama, began by asking Starr about Lewinsky: “Do you think that the violation you found was worth more than four years of investigation?” Starr had to remind listeners that he didn’t just investigate Lewinsky, but savings-and-loan corruption in Little Rock, sending to jail the sitting governor of Arkansas (Jim Guy Tucker) and crooked bankers Jim and Susan McDougal, real-estate business partners with the Clintons.

Inskeep argued “history” would ignore all of the non-sex stuff: “Ultimately, what history is going to remember is that one charge, the perjury accusation involving Monica Lewinsky. Was that worth it?” So Starr should have ignored perjury committed by the president of the United States?

The taxpayer-subsidized anchor was upset that Republicans seemed to approve of Trump calling Robert Mueller’s probe a “witch hunt”...since they approve of Trump’s job performance. Starr disagreed, saying “we agree with 80 percent of his policies,” but not how he tweets. Inskeep attacked Starr’s sincerity: “Isn't that kind of dissembling, though, Mr. Starr, because that is the heart of his presidency, is what he says publicly and the attitude he strikes?”

How can Inskeep sound outraged about a president attacking a special counsel when he’s interviewing Ken Starr, who was eviscerated publicly by Bill Clinton & Co.? That’s apparently fine, since twenty years ago, the media compared Starr to Nazis, truck-bomb terrorists, and Sen. Joseph McCarthy. Back then, “witch hunt” talk was all the rage.