The world of television and how Hollywood delivers it keeps changing. Streaming services like Netflix, Hulu, and Amazon have become prestige brands whose original programming draws a pile of Emmy nominations. In the latest nominations for 2017, Netflix had 91 Emmy nominations, second only to HBO’s 111. Hulu had 18 nominations and Amazon had 16, just a few less than Fox (21).

But as much as technology changes, some things remain the same. The entertainment factories keep ripping on Republican politicians in the crudest terms. Hulu has created a sitcom called “Difficult People.” The characters in that title are two unlikeable, self-absorbed stand-up comedians. In the new season, they’re taking out the political pitchforks.

One of the comedians, a gay man named Billy, mocked Vice President Mike Pence as a “failed prototype for one of those Japanese sex robots.” The show had a ridiculous plot where Billy pretends to participate in a new Pence program called Sixpence None the Gayer, where the federal government pays gay people $6,000 to become straight through electric shock therapy.

When Billy joins this purported Pence program to get the cash, a package arrives in the mail complete with beer, a “Make America Straight Again” hat, and an electric shock therapy kit. Liberals have tried to insist Pence favored government funding of conversion therapy, poting to a pledge on a campaign website favoring “assistance to those seeking to change their sexual behavior.” Lost on them is the irony – or hypocrisy, really – that they favor that very thing for transgenders in the military or in prison.

Also, Billy notices a new vice-presidential seal on an envelope – a red-white-and-blue swastika. You see, stupid voters put Nazis in the White House.

“Difficult People” also viciously mocks the Reagans. When an elderly man has trouble with a computer at work, a younger man complains “I don’t need to watch you fumble around like Ronald Reagan.” Later, a sobriety sponsor for one of the comedians proclaims  “Nancy Reagan was an AIDS-ignoring monster.”

The “AIDS-ignoring” Reagans is one of the sturdiest lies of the Hollywood Left. 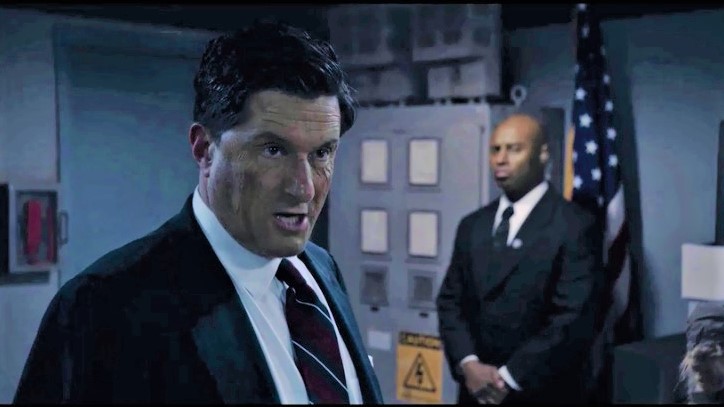 But that show looks like “Masterpiece Theater” next to Netflix’s comedy “Wet Hot American Summer: Ten Years Later.” The show is based on an old movie about kids attending a summer camp at “Camp Firewood” in 1981,  the new TV show is set in 1991. The show’s plotters inserted former president Reagan boasting  of stealing a nuclear weapon after he left office so he could blow up this summer camp. This is just too asinine to be funny.

And it gets more stupid by the minute.  Reagan and President Bush come to camp, and someone proposes, complete with a diorama, that instead of blowing up the camp, they rebuild it as a Reagan tribute. So this crazy Reagan throws the diorama on the floor and urinates on it. That’s not enough. Then he defecates on it. That’s still not enough. He then makes President Bush defecate on it, because Bush did whatever Reagan ordered him to do, see?

On some TV shows, the Reagan-bashing is much more realistic. A recent episode of the FX series “Snowfall” – the feverish one trying to connect the explosion of crack cocaine in Los Angeles to Reagan backing the Nicaraguan resistance – had a scene of a Black Panther throwing darts at a painted image of Reagan’s head. Imagine anyone in TV Land  uncorking plots and visuals this mean-spirited on the Kennedys, the Clintons, or the Obamas.

We know the Left remains emotionally overwrought at the reality that Donald Trump was elected president, but their never-ending demonization of the Reagans shows that their anger never softens. Their bitterness never relents.