Bozell & Graham Column: The Lighter Side of Assassination?

In the wake of Kathy Griffin holding up a severed head of President Trump, it’s disturbingly obvious that murderous thoughts about our leaders are now considered by the Left to be light and humorous fare, a balm for their anxieties.

It’s not just Trump. The latest issue of the French satirical magazine Charlie Hebdo arrived just before the British elections, with a tasteless cover cartoon of British prime minister Theresa May holding her own severed head in her arm under the title “Multiculturalism Is The British Way.”

It's why we're still with the hashtag #NeSuisPasCharlie. 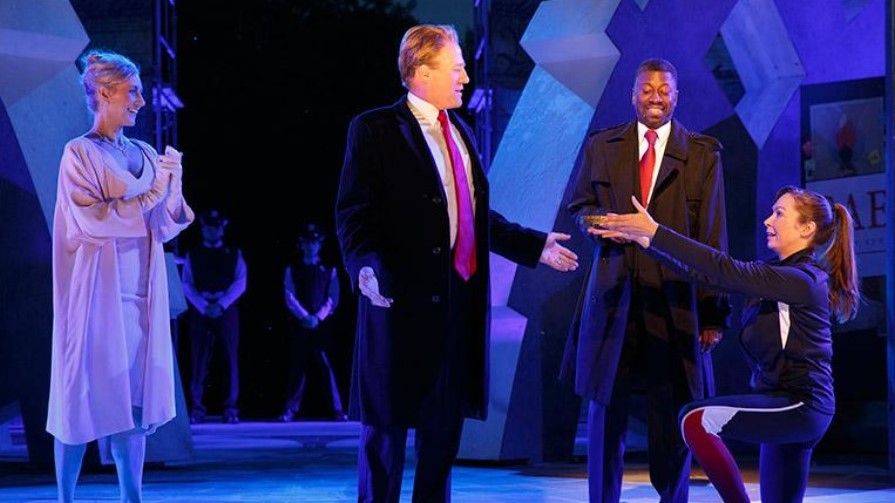 Griffin’s assassination theme is also operating in a poorly disguised Trump version of Julius Caesar currently running as the “Shakespeare in the Park” production in Central Park. Caesar wears a business suit with an overlong necktie and a bushy reddish-blonde haircut. His wife Calpurnia speaks with a Slovenian accent.

The New York Public Theater’s website describes this updated production like this: “Magnetic, populist, irreverent, he seems bent on absolute power. A small band of patriots, devoted to the country’s democratic traditions, must decide how to oppose him. Shakespeare’s political masterpiece has never felt more contemporary.”

Artistic director Oskar Eustis seconded the emotion that Shakespeare’s play was “fresh and new” in our modern age of apparent Trump tyranny: “The institutions that we have grown up with, that we have inherited from the struggle of many generations of our ancestors, can be swept away in no time at all.”

The central act of the play was Caesar being stabbed to death, and in this modernized version, an American flag looms over a bloody stabbing of Trumpy Caesar. One audience member, Laura Sheaffer, was shocked. “'They had the full murder scene onstage, and blood was spewing everywhere out of his body,” she said. “To be honest, I thought it was shocking and distasteful. I mean it was the on-stage murder of the president of the United States.”

In the era of Trump, what is one man's distaste is the Left's idea of class. The LuEsther T. Mertz Charitable Trust (from the Publishers Clearing House magazine-sweepstakes fortune) is the financial patron for all this assassination chic. American Express is the “official card” of this Trump-loathing gang.

Everyone can guess the reaction of the Manhattan-centered national media if this same play had been modernized with a charismatic black president and his fashionable wife with the well-toned arms. From the Safe Bet Department: This would never, ever happen in New York City. The Obama-loving press got a nasty case of the vapors when Rush Limbaugh merely wished his agenda would fail, and again when Mitch McConnell suggested Obama should be denied a second term. Imagine either of them condoning a fictional rendition of his assassination.

But a bloody murder of Trump on stage upsets no one. The New Yorker passed right over it. The New York Times couldn’t be moved. There were no Starbucks spit-takes on Morning Joe.

The socialist British newspaper The Guardian, last seen taking great umbrage that its reporter was shoved to the floor by a congressional candidate in Montana, described the Trump assassination plot as “taking a somewhat lighter touch with their Trump resistance themes.” A lighter touch? Trump being stabbed like a pin cushion? How droll!

CNN Sunday host Fareed Zakaria gave it a rave review on Twitter: “If you're in NYC, go see Julius Caesar, free in Central Park, brilliantly interpreted for Trump era. A masterpiece.” That brings the whole Kathy Griffin theme around again. This is why Griffin felt her severed-head stunt would only make her more popular at CNN.