In reaction to the May ratings report showing MSNBC rising to number one in the prized 25-to-54 demographic, CNN sent out a spokeswoman to separate themselves from the competition. Unlike presumably MSNBC and certainly Fox News, CNN should be viewed as “the one nonpartisan cable news network.” 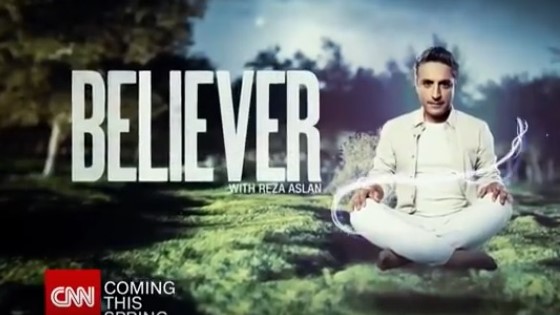 This statement was issued after CNN personality Kathy Griffin offered the stunt of holding up a replica of President Trump’s bloody, severed head. It’s doubly shameless that it also came after CNN host Reza Aslan raged at the president on Twitter, calling him “this piece of s–t.” [We have edited.] CNN responded to the Griffin horror by canceling her annual New Year’s Eve appearance. Aslan, on the other hand, didn’t seem to bother them that much.  CNN lamely sent out a flack to say Aslan was not a “CNN employee” – as if this meant anything.

Aslan “apologized” by insisting “that’s not like me” to respond in such a “derogatory fashion.” That is untrue. Twitchy and other Twitter searchers quickly found a long list of examples of Raunchy Reza, He called Trump a “POS” – how polite to abbreviate it – on May 17: "This is precisely the bulls--t that led a record 81% of WHITE evangelicals to vote for a greedy lecherous racist pathological lying POS". On May 9, he called Trump “a lying conniving scumbag narcissistic sociopath piece of s–t  fake president.”

Who is Reza Aslan? Go to CNN’s website. You’ll learn he hosts Believer, a “spiritual adventure series.” You’ll be told Aslan is a “renowned author and religious scholar.” What you won’t be told is that Aslan is a leftist Muslim activist who wrote an insulting book about Jesus Christ called “Zealot.” He recently gave a lecture at the University of Pennsylvania titled “Fear Incorporated: Confronting Islamophobia in America.” What you also don’t see is how vile this “religious scholar” can be on social media.

He reviewed President  Trump’s first trip abroad:  “But on the plus side he didn't s--t himself in public."

After Greg Gianforte won a House seat after assaulting a liberal reporter, Aslan mocked Vice President Mike Pence:  "And Jesus said, 'if someone tries to ask you a question, beat the s--t out of them.'"

He responded to a Happy Mother’s Day tweet by House Speaker Paul Ryan by screeching: "Except of course Syrian moms fleeing war, famine, and genocide with their starving children. F--k those moms."

Responding a tweet by author and Obama critic Dinesh D’Souza, he fired off this beaut: “Hey Dinesh. I'll say this as politely as I can: Go f--k yourself, you adulterous piece of s--t felon.”

That was similar to a tweet imagining what Khizr Khan's wife would say to Trump if they spoke after he criticized her at the Democratic National Convention: "She'd probably tell you to go f--k yourself."

He really doesn’t like conservative Republicans: "Just to be clear I was indeed wishing someone would rape congressman Todd Akin. I'd hate to be misunderstood."

After uncorking these vicious and profane tirades, CNN cannot plausibly keep this man on the payroll and say it’s “the one nonpartisan cable news network,” or a haven for civilized discourse.