In the stunned aftermath of the 9/11 attacks, America healed in part by tuning in to Saturday Night Live, just a few miles from the wreckage of the twin towers of the World Trade Center. We all felt like New Yorkers and like Pentagon employees after radical Islamic terrorists killed more than 3,000 Americans by hijacking four airplanes.

Now, many years later, the American Civil Liberties Union is demonstrating their bizarre definition of “civil liberties” by complaining that the 9/11 terrorists are not having their civil rights respected. “Will the 9/11 Defendants Ever Get a Fair Trial?” Most Americans wonder why anyone responsible for 9/11 is still breathing.

But guess who supports that radical take? Stars of Saturday Night Live. 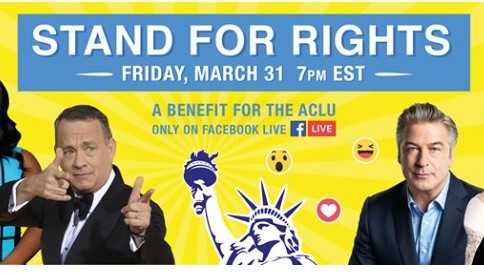 Ike Barinholtz, an actor on the sitcom The Mindy Project, pitched the telethon this way in a Facebook video: “Do you wish you could help people and protect civil rights while being entertained by some of Hollywood’s biggest and brightest stars?”

Hogwash. You somehow “help people”and “stand for rights” by spitting on the graves of the 9/11 dead and championing the rights of 9/11 mastermind Khalid Sheikh Mohammed? The Left doesn’t care about the lost civil rights of people murdered by terrorists, only the civil rights of terrorist suspects. The prison at Guantanamo is somehow more historically heinous than the 9/11 attacks ever were.

Liberals are so arrogant they think conservatives are the oppressors and torturers, as they support the rights of terrorists and abortionists who sell the body parts of dead babies. The ACLU has created a “People Power” project to fight the Trump administration on their agenda: “deportation raids, the Muslim ban, Planned Parenthood defunding, and other civil rights priorities.” They’re very selective about which “civil rights” are essential, including a so-called right to import yourself into America, especially if you’re Muslim.

The ACLU felt much differently about President Obama, even if their agenda was the same. They took out an ad in The New York Times right after the 2012 election congratulating Obama for accomplishing “a lot in your first term,” but demanding that Obama close Guantanamo, rescind “anti-immigrant federal programs and policies,” and mandate that “Abortion coverage should be available in all federal health insurance programs.” These priorities would “restore America as a land of freedom and defender of human rights.”

This lobby is a hot property among the Hollywood Left in the age of Trump. At this year’s Oscars, several celebrities – including Hamilton creator Lin-Manuel Miranda and Loving actress and Oscar nominee Ruth Negga – wore blue ACLU ribbons on the red carpet. During Trump’s inauguration, celebrities including Jane Fonda, Tim Robbins, and Jamie Lee Curtis hosted a “Love-a-Thon” on Facebook Live to support anti-Trump activists including the ACLU and Planned Parenthood.

Up next? Perpetually confused  leftists across America will host screenings of the movie “1984" – a cautionary tale of oppression by the totalitarian “Ingsoc” (“English Socialist”) party – as an anti-Trump event, encouraging audiences to donate to the ACLU.

The entertainment industry will never stop being egregiously out of touch with the American heartland. One of the easiest ways to prove that is to ignore the fact that the ACLU is at war with our long struggle to provide liberty and justice for all.