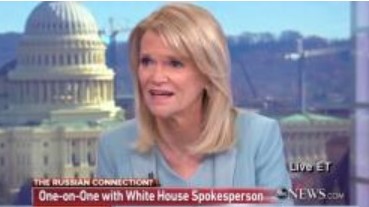 White House deputy press secretary Sarah Huckabee Sanders exposed a notable bit of hypocrisy on ABC’s This Week. As the liberal media boiled over about President Trump accusing President Obama of wiretapping him, ABC host Martha Raddatz spat at Sanders about a conservative blog’s reporting: “And Heat Street, they have two sources with links to the counterintelligence community. That's it. Anonymous sources.”

Bravo! We couldn’t have said it better ourselves. We don’t see evidence yet that Obama ordered a wiretap on Trump or his aides, but we know this: arrogant Old Media outlets think their sources are automatically impeccable, eternally credible and nonpartisan. Indeed, Raddatz bit down on that notion. “Yes, we do,” Raddatz replied. “The Washington Post says this morning that, ‘senior U.S. officials with knowledge of the wide-ranging federal investigation into Russian interference into the election said there had been no wiretap.’”

So why are we all supposed to genuflect to The Washington Post and The New York Times when they publish breathless stories taking on the White House relying on their favored “senior U.S. officials”? After all, the Times put a columnist on their front page declaring that the press needed to be “oppositional” and defeat Trump since he was a “demagogue playing to the nation’s worst racist and nationalistic tendencies” who “cozies up to anti-American dictators”  and “would be dangerous with control of the United States nuclear codes.”

The Post imagines itself as forever taking down the latest Nixons. One anti-Trump column was headlined “In the angry face of Trumpism, media must speak truth to glower.”

It’s beyond irony that the press that champions transparency also advocates relying on completely opaque sources on a daily basis. In political combat over allegations that Obama administration holdovers in the intelligence community tried to take down Trump, wouldn’t it help to know if these liberal newspapers are relying on Obama holdovers and granting them all the benefits of anonymity?

Isn’t it possible that “senior officials” are offering talking points authored by Barack Obama himself? We’ll never know. But we know we can’t trust liberal newspapers, given their political tilt.

The Post openly knocked Trump for decrying anonymous sources even as his own officials demanded anonymity. “Two of those officials spoke on the condition of anonymity -- a practice President Trump has condemned,” wrote reporters Greg Miller and Adam Entous. But they don’t note their own daily hypocrisy.

These media outlets can even fail to disclose biographical facts when an official is named. The Post ran an op-ed (and a three-minute video, or negative ad) by Ned Price headlined “I didn’t think I’d ever leave the CIA. But because of Trump, I quit.” Price presented himself as an intelligence pro who worked for administrations of both parties: “To be clear, my decision had nothing to do with politics, and I would have been proud to again work under a Republican administration open to intelligence analysis.”

But Price was quickly exposed. He’s registered to vote in D.C. as a Democrat and split $5,000 in donations last August to Hillary for America and the DNC’s Hillary Victory Fund. Online, the Post added a line that the donations should have been disclosed.

But we never know the donation records of “senior U.S. officials” placed anonymously on the front page, do we? The liberal media merely insist “Trust us.”