It’s an ironclad principle. Media coverage of the quadrennial Republican and Democratic conventions is a laboratory exercise to demonstrate how shamelessly partisan our political reporters truly are.

In this topsy-turvy year, it would be obvious for the media to proclaim that the Democratic convention was much more smoothly and professionally organized, with a greater star power presence. As usual, the Democrats squeezed a lot more free time out of the networks by having their stars speaking far into the “News at 11" hour. Trump, on the other hand, closed with a fizzle the first two nights, featuring a (boring) general and a former soap-opera star.

Trump did not deliver with the promised hoopla, but it really made no difference. The press was just not going to project a successful convention for the GOP. They never do.

It is a metaphysical truth: the networks engage in a partisan double standard. They've done it for decades. 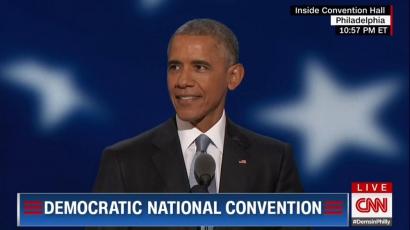 The easiest measurement is tone. Media "analysts" always find the Republican convention to be overflowing with acrimony, even hatred. This year was true to form. They can’t stomach the idea that someone would say mean things about Hillary Clinton.

The retired anchormen came out to carp. CBS’s Bob Schieffer complained Mrs. Clinton had been accused of everything, including “the diphtheria epidemic.” On NBC, Tom Brokaw lamented the GOP was trying to “work up a big hate for Hillary.” Over on MSNBC, Chris Matthews despised Chris Christie’s speech so much that he  called the convention a “festival of hating Hillary tonight, this brewing up of almost a witch-like ritual tonight,” tossing in adjectives like “bloodthirsty” and “blood-curdling” to describe the delegates’ applause and cheers.

But say something insulting about Trump, and not only is that not negative, it’s acceptable truth-telling. During the first two days of the Democratic convention, speakers called Donald Trump a con man who “cheats students, cheats investors, cheats workers.” He “rejects science” and would take America “back to the dark days when women died in back alleys.” He was someone who promoted “racial hatred” and “hate in their heart,” and was “making America hate again.”

Media Research Center analysts studied ABC, CBS, CNN, MSNBC and NBC’s coverage from 9 pm to midnight during the first two nights of each convention. During the GOP convention, journalists scolded the Republicans for negativity 63 times; in the same time slot at  the Democratic convention, viewers heard only five such comments from reporters, a more than 12-to-1 advantage.

But during the Democratic convention, CNN chose to air 18 of the party’s scheduled videos, six times more than the GOP. The minute-to-minute count was 62 minutes for the Democrats to just 14 for the Republicans. CNN routinely showed the party-produced videos gushily promoting star speakers including both Obamas and both Clintons.

The networks pine to invite Democrats to trash Republicans during their convention, which is just fine, except it's never the reverse. CBS aired four minutes of Hillary Clinton trashing Trump in its prime-time coverage, but never balanced that with a Republican taking her to task in Philadelphia. MSNBC’s Brian Williams promised they would balance their interviews. His idea of balance: they interviewed five Democrats in prime time during the GOP convention, and offered zero Republicans when the shoe was on the other foot.

Two weeks of network coverage with this dramatic tilt underlines why the media’s credibility is in the toilet. They're not even trying to be fair. They are vested entirely in the success of the Democrats.