After weeks of indecision, ABC decided on May 12 it would renew the Catholic-bashing sitcom The Real O'Neals, loosely based on the childhood of vehement gay sex columnist Dan Savage. But then Noah Galvin, a 22-year-old gay actor playing the fictional version of Savage, gave an interview to New York magazine's Vulture blog that was so rude that The Hollywood Reporter said ABC was reconsidering its options, like reducing the number of episodes ordered for Season 2.

An executive producer who had spent four years getting the series on the air was "begging the network not to take action," said a source to The Hollywood Reporter. One show source added: "He caused a grade-A s--t show. ABC screamed at him all afternoon." 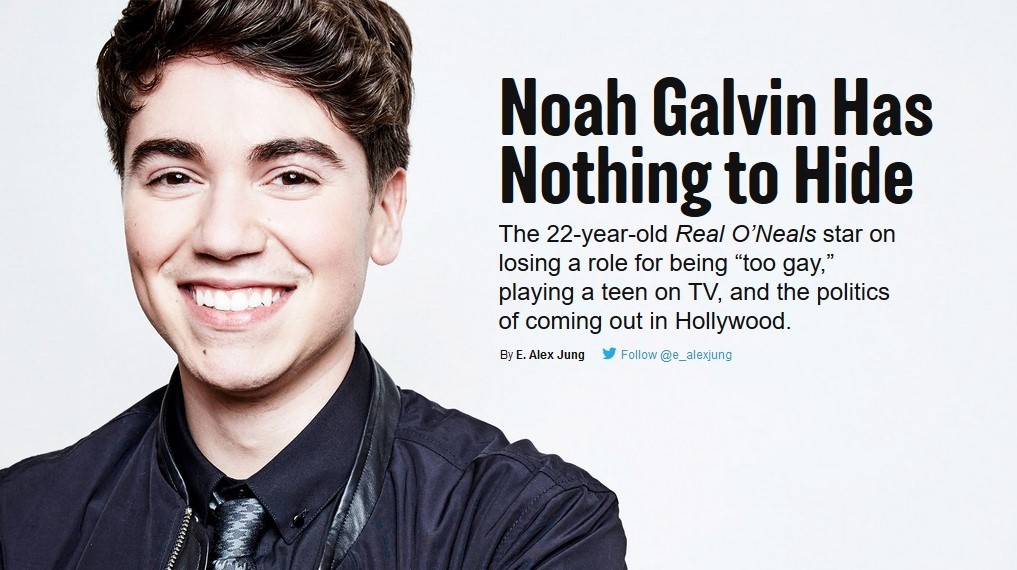 So what did Galvin say?

First, Galvin said powerful X-Men director "Bryan Singer likes to invite little boys over to his pool and diddle them in the f-ing dark of night." This accusation was so explosive that Singer's representatives forced it to be removed from the Internet. Child sexual abuse allegations in Hollywood are to be swept under the rug.

Second, he slammed Modern Family star Eric Stonestreet for playing his chubby gay character Cam as "a caricature of a caricature of a stereotype of a stereotype on Modern Family. And he's a straight man in real life. And as hilarious as that character is, there's a lack of authenticity." That had to really bother the executives at ABC, who think that show (and Galvin's) are dragging a backward America into modernity and sexual diversity.

Galvin was also catty enough to attack fellow gay actor Colton Haynes, a star of the CW show Arrow, for not coming out of the closet strongly enough in Entertainment Weekly magazine (it tumbled out in the seventh paragraph). "That's not coming out. That's f-ing pussy [BS]."

But when asked how he could help gay youth, he sneered " I'm still figuring out my own [BS]. I've got struggles of my own. I don't have time to be your f---ing soothsayer."

Either ABC or his agent (or both) quickly forced Galvin to issue a fulsome apology: "The entire interview I gave to Vulture has hurt the LGBTQ community and the industry I feel truly fortunate to be a part of. My only intention was to try and empower and promote honesty, but I fully understand that comments I made were brazen and hurtful."

The LGBT magazine The Advocate found out that the show's inspiration, Dan Savage, was all clammed up: "We wanted to let you know that we received your request, but Dan is not commenting at this time," reported a Savage spokesman.

In his controversial interview, Galvin gushed about Savage, who is an executive producer on the show. "I love him a lot. He's the smartest gay man you'll ever meet in your life. He's the most articulate."

Could Savage be the unnamed "executive producer who has spent four years getting the series on the air" who was begging ABC not to punish the show? Perhaps he's telling them Galvin's interview proved the young actor was a "caricature of a caricature of a stereotype of a stereotype" of a catty gay activist. He's looking more like Dan Savage every day.