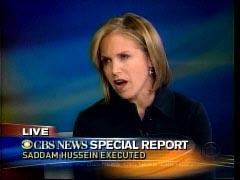 For three years, President Bush has been portrayed as stubborn on Iraq, so defiant that it’s disturbing, perhaps even a sign of delusional certitude. There’s a mirror image at play: those doing the portraying, i.e., the media have been every bit as stubborn when it comes to their defiant insistence that everything that happens in Iraq, no matter how positive, is another peg for bad news coverage.

We acknowledge that the daily drumbeat of death pounded by the media is based on facts. That does not mean that all death is bad. In war, it is a tragedy to learn that your countrymen have fallen. It is cause for celebration when the enemy dies. But for the American news media, all news is bad news if the theater is Iraq.

When American forces killed Saddam’s evil sons Uday and Qusay in July of 2003, the press reported the news as a P.R. disaster. NBC’s Richard Engel said the display of their bodies was “offensive to Muslim sensibilities.” ABC’s Terry Moran suggested the U.S. violated the Geneva Conventions. Eleanor Clift said we lost a “major opportunity” for Saddam’s boys to tell us where the WMD were hidden.

A new study of cable-news coverage by the Media Research Center demonstrated the same pattern when American bombs took out terrorist leader Abu Musab al-Zarqawi last July. CNN counter-programmed that achievement by interviewing a leftist journalist who defiantly complained, "There’s no good news in Iraq. There’s no corner that’s been turned, there’s no milestone." Over on MSNBC, reporters took time away from covering the breaking news of Zarqawi’s death to feature four stories profiling U.S. military deserters, the “new face of the anti-war movement.”

This was just part of a routine. MRC analysts reviewed two months of Iraq coverage during the midday hours on CNN, MSNBC, and Fox News in mid-2006, and the numbers speak volumes. Fully three-fifths (60 percent) of all CNN stories on the war emphasized pessimism about progress in Iraq, compared to just 10 percent that reported on achievements or victories. MSNBC’s tilt was similar, with four times more bad news stories (48 percent) than reports stressing good news (12 percent). Fox News, so often cartooned as the rosy-news channel, had a ratio of 30 percent negative stories to 20 percent positive.

Now add the execution of Saddam Hussein to the mix. It is amazing that the American – the American! – media couldn’t stand the thought that this in any way could be interpreted as a brief occasion for good news. This tyrant, whose brutal regime of torture and murder left hundreds of thousands dead and a nation destroyed, now rots in Hell, thanks to us. Us. As in the United States – us. Yet there was no moment of brief satisfaction on TV. CBS broke in to show former Clinton official Richard Holbrooke reassuring Katie Couric that this meant nothing for President Bush’s Iraq policy.

Some outlets protested the “rush” to execution, most notably the anti-American editorial pages of The New York Times. Rushed? Putting a bullet in his head when we found him in the spider hole at the end of 2003 would be a “rushed” job. Instead, he sat in jail eating Doritos for three years, making a mockery out of his trials for mass murder, when everyone but Ramsey Clark knew he was guilty as sin. Whether the pace of justice for Saddam had been swift, or whether it was glacial, we knew the United States would be trashed by its homegrown media no matter which way events turned.

CNN even had the audacity to worry about the brutality of hanging Saddam. Reporter Randi Kaye wondered “Will Saddam suffer in death?” The villain was now the victim. But the real turning point for the negative nabobs was the cell-phone video of Saddam hanging, and toadies of Shi’ite militant leader Moqtada al-Sadr chanting his name in the aftermath. To be sure, the spectacle was disgusting, but should it overshadow so completely the justice that was done?

In Newsweek, Christopher Dickey insisted “the tyrant’s end looked more like the result of a sectarian show trial.” Show trial? What next – Saddam was framed? NBC’s Richard Engel declared it was yet another “major public relations blow” for America. On MSNBC, Chris Matthews dragged out the old line that Bush was clueless about how disastrous this video was, just like he was clueless about footage of Hurricane Katrina. The New York Times even argued the video showed Saddam took his punishment with “unflinching dignity and courage.” What a guy, that Saddam.

Reporters act amazed that Bush hasn’t waved a white flag and surrendered to their wishes. He shouldn’t. He should respond with a political broadside of his own, reminding them that when America’s enemies are brought to justice, Americans should, and will, rejoice.