CNN and MSNBC on many days repeatedly cut in and out of the daily White House briefings on the coronavirus pandemic, with CNN the most eager to replace remarks from President Trump, Vice President Pence or any number of medical and logistical experts with derisive commentary by its anchors and reporters. MSNBC carried a little more than CNN, but its anchors also weren’t hesitant to chime in with their condemnations of Trump’s remarks.

A Media Research Center study found that CNN has carried just 69 percent of the briefings’ runtime of those conducted March 30 through April 14. That’s 999 of 1,435 minutes, leaving seven hours and 16 minutes unaired. MSNBC has aired live 1,088 minutes, or 76 percent, not running five hours and forty-seven minutes. Thus, CNN and MSNBC viewers missed more than 13 hours of the briefings. (FNC cut out a few minutes early on two days, but otherwise has carried all the briefings in full, airing 1,383 minutes, about 96 percent of the total duration.) 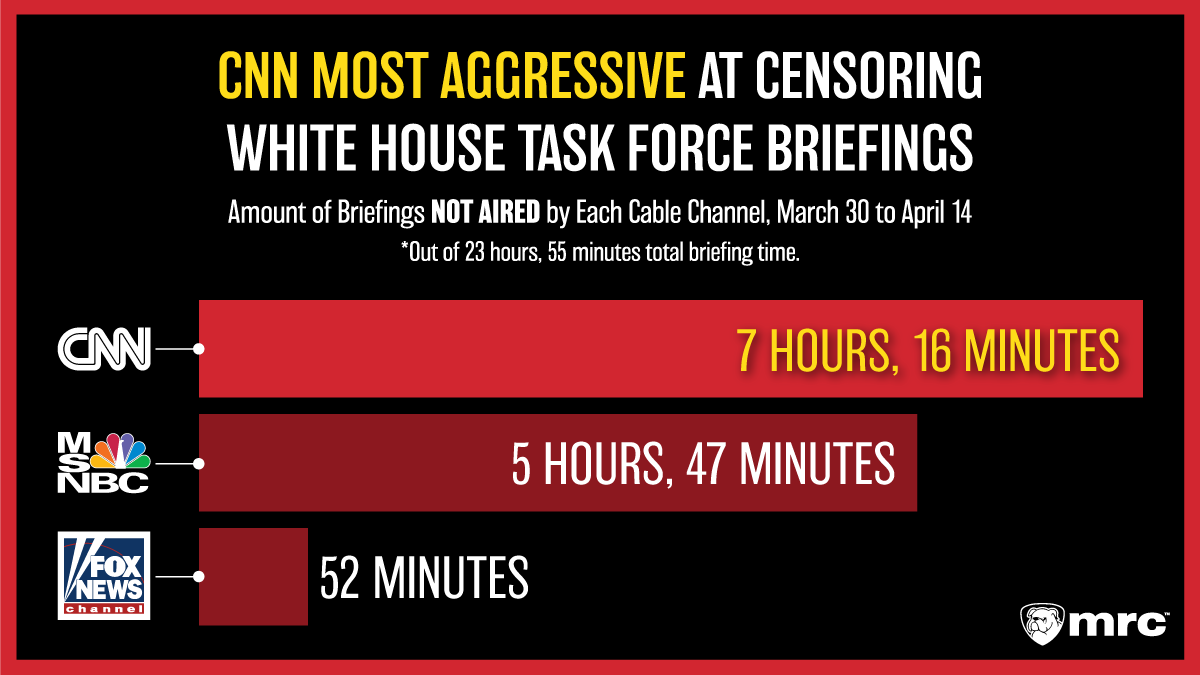 For six of the 14 briefings over the time period, CNN ignored Trump’s opening remarks, joining the briefing only after he had finished. Wolf Blitzer announced on April 6: “Once the experts start speaking, once the questions and answers begin, we’ll go back to that briefing.”

A week later, CNN’s John King offered this justification for ceasing the live coverage: “The briefing was breathtaking from beginning to when we dropped out and at times it bordered on dangerous.” The next day, an angry Jim Acosta declared “these briefings altogether are coming across like something out of ‘Baghdad Bob,’” with Trump “sounding very ‘Baghdad Bob’-like.”

Video compilation with some of the hostile commentary from CNN and MSNBC during the time of the daily briefings:

MSNBC’s Chuck Todd reflected the media’s condescending attitude toward Trump, warning his viewers: “Briefings have a tendency to veer in a lot of different directions, not all of them informative or relevant....If it veers too much off, we will break off.”

A few days later, anchor Nicolle Wallace cut off the live feed of Trump, charging: “He said a lot of other stuff, too, some of it nonsensical. Some of it incoherent.” While Dr. Deborah Birx spoke, MSNBC stayed with their own commentary, as MSNBC analyst Steve Schmidt asserted of Trump: “It really looks almost mentally like he’s unraveling under the pressure.”

Another day, Todd jumped in: “There is so much of some questionable things that the President said that I do want to go through.” And on another: “We’ll want to cut in here. There are two things the President has said in the last 15 minutes that we think is worth trying to explain or fact check here.”

On April 9, MSNBC’s Ari Melber was willing to show the briefing only after Trump stopped talking: “We want to dip back into the briefing. The President seems to have taken a break from speaking.”

Click “Expand” for a day-by-day rundown of carriage by network:

Rundown, Monday, March 30 through Tuesday, April 14, based on a review of the MRC’s all day recordings via our digital recording system:

All briefings carried in full by Fox News Channel, with two exceptions noted below, C-SPAN and OANN. FBN airs in full on weekdays, but if the briefing goes past 7 PM ET, at 7 PM FBN ends coverage to air re-run of Lou Dobbs Tonight.

Broadcast networks. With the exception of CBS News on two days, the broadcast networks have not aired any as a network Special Report (which many affiliates would pick up) since Sunday, March 29. Their online services: ABC News Live: carries from start, but cuts off at 7 PM ET on weekdays when the service goes to the ABC News Live Primetime newscast. CBSN: carries in full. NBC News NOW: carries in full.

> MSNBC: joined about one minute late. (Chuck Todd made snide remark: “Briefings have a tendency to veer in a lot of different directions, not all of them informative or relevant....If it veers too much off, we will break off...”) Cut out at 7:17 PM for “a fact check” on MSNBC Live: Decision 2020. Did not re-join. [106 of 131 minutes]

> MSNBC: Started at 4:16. Cut out at 4:43 PM. (Nicolle Wallace: “He said a lot of other stuff, too, some of it nonsensical. Some of it incoherent”). Re-joined two minutes later at 4:45 PM when Dr. Anthony Fauci began. Cut out at 5:01 PM in midst of Trump answering questions, to express outrage over Trump comments about intel IG. (Steve Schmidt as Birx spoke: “It really looks almost mentally like he’s unraveling under the pressure”). Re-joined at 5:05 for Birx and carried through end at 5:59 PM. [97 of 103 minutes]

> MSNBC: Started at beginning at 6:59 PM. Cut out at 7:26 PM during update from an Army officer. (Kasie Hunt: “We want to start here by fact checking a little bit of what we just heard from the President of the United States.”) Re-joined at 7:32 PM for Pence and carried through the end. [77 of 83 minutes] 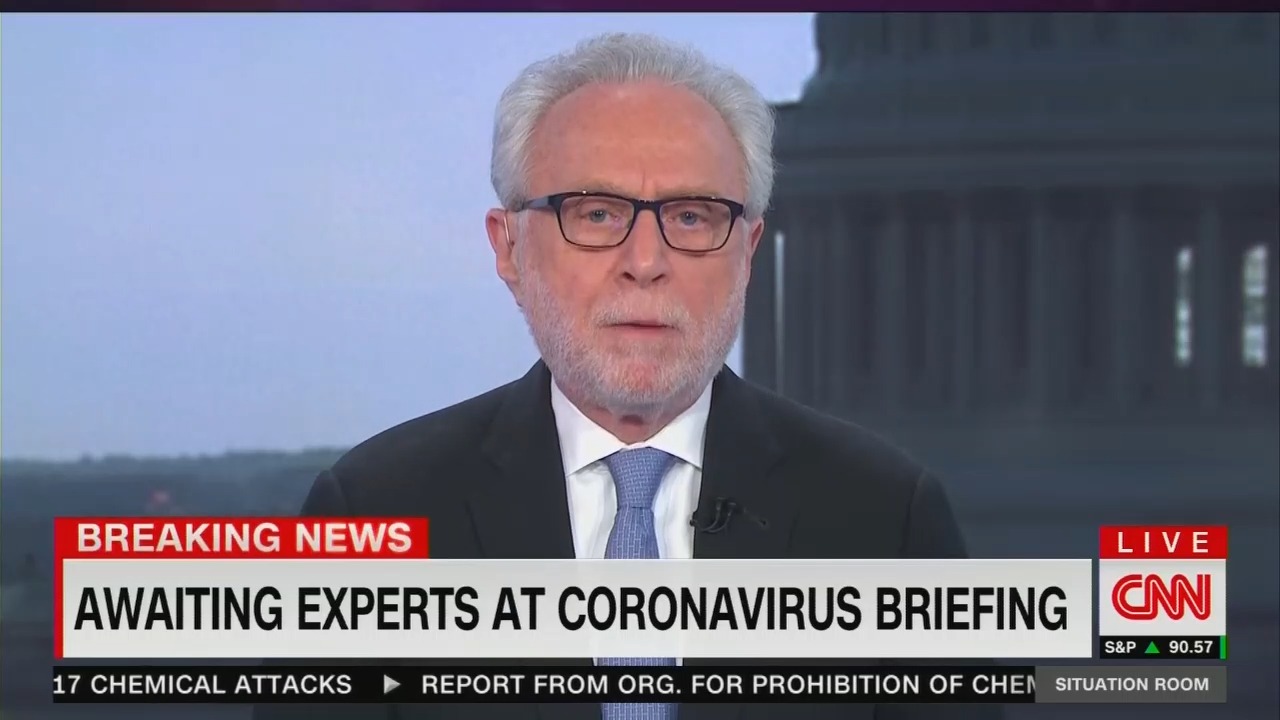 > CNN: Joined late, skipping Trump’s opening remarks. (Wolf Blitzer back from ad break at 5:43 PM: “We’re awaiting the experts at today’s briefing by members of the White House coronavirus task force.”) Began showing at 6:00 PM and cut out at 6:05. (Blitzer: “Once the experts start speaking, once the questions and answers begin, we’ll go back to that briefing.”) Re-joined at 6:09 PM for q and a. Cut off at 7:06 PM, as Admiral Brett Giroir was answering a question, and did not re-join. [62 of 130 minutes]

> CNN: Stayed with The Situation Room until joining at 6:16 PM (thus skipping not only Trump but missing update from Secretary of State Pompeo on the status of bringing home U.S. citizens stuck abroad) as Trump began to take questions and carried until 7:17 PM during expert q and a. Did not re-join. [61 of 103 minutes]

> MSNBC: Joined just over a minute late. (Chuck Todd explained: “We’re going to jump in multiple times throughout this briefing any time we think this thing has veered way off the truth lane and we’ll try to bring it back in. For now, we’ll take a listen. We do think that you are capable of discerning this on your own as well.”)

> CNN: Stayed with The Situation Room until starting carriage 31 minutes late, at 6:55 PM, as Pence spoke. Continued coverage uninterrupted through end of briefing. [34 of 65 minutes]

> MSNBC: Aired from beginning, but cut in at 6:41 PM. (Ari Melber: “We are going to do a fact check on some of the medical claims and then we may dip back into the briefing...”) Re-joined at 6:46. (Melber: “We want to dip back into the briefing. The president seems to have taken a break from speaking.”) Cut off at 7:06 PM, when Secretary of Labor Scalia took podium to speak, and did not return. [37 of 65 minutes]

> CNN: Aired almost all of it, from start until cutting it off at 4:02 PM when an exchange ended between CNN reporter Jim Acosta and President Trump. [129 of 133 minutes]

> CNN: Showed from its start at 5:49 PM and showed first 1:45 (of 3:30) of the video Trump played showing media’s hypocrisy and listing his actions, cutting out at 6:06 PM. Re-joined at 6:08 PM. Cut out at 6:10 PM. (Wolf Blitzer: “Let me take another quick break as the president tries to strongly defend himself.”) (Jim Acosta: “What we just saw a few moments ago, and it’s a good thing we cut out of it, is the White House essentially tried to play a campaign style video in the White House briefing room.”)

Re-joined at 6:15 PM. Cut out at 7:18 PM and did not re-join. (Erin Burnett: “The president was very angry, if you were watching that over the past hour and a half or so, trying to rewrite history regarding his  response to coronavirus.”) (John King: “The briefing was breathtaking from beginning to when we dropped out and at times it bordered on dangerous.”) (Brian Stelter at 7:24: “He started this briefing with that anti-media propaganda video which is nothing short of disgraceful.”) [83 of 143 minutes]

> MSNBC: Began coverage at beginning of briefing. Aired all of 3:30 video played by Trump before Ari Melber cut in at 6:08 PM. (Melber: “We are cutting into what was not a White House coronavirus task force briefing. I am Ari Melber. Our special coverage continues. We are going to avoid airing any more of this White House briefing until it returns to what it was supposed to be...”) (Howell Raines, former executive editor of the New York Times: “Ari, I think this is one of the most astonishing acts of disinformation we’ve seen from a White House since the Vietnam era and the 5:00 O’Clock follies of Lyndon Johnson’s administration.”)

Re-joined at 6:25 PM just time for CBS’s Paula Reid questioning Trump. (Melber: “We cut out of this briefing for the reasons stated. We are seeing journalists now questioning the president on this dramatic day. We’re going to listen in to that portion and bring you more fact checking and coverage as we continue.”) Aired until 7:28 PM and did not re-join. [82 of 143 minutes]

> Fox News Channel carried until 8:00 PM when they switched to Tucker Carlson Tonight. [131 of 143 minutes]

> CNN: Started on time at 6:14, cut out at 6:30 PM for what Blitzer called “some analysis” of decision to stop funding WHO. Minute later, re-joined. After just under two minutes, cut out again. (At 6:38 PM Jim Acosta cited WHO as another “scapegoat” and cited “Monday meltdown when he played that propaganda video,” declared “these briefings altogether are coming across like something out of ‘Baghdad Bob,’” Trump “sounding very ‘Baghdad Bob’-like.”) Re-joined at 6:39 PM and cut out at 6:51 PM, re-joined at 6:57 PM and stayed live until the end. [51 of 67 minutes]

> MSNBC: Started about a minute late. (Chuck Todd explained over live shot of Trump: “We’ll have our entire team of experts watching this briefing along with us, and when we feel it’s necessary, like the replay booth at a game, we’ll go in and break it down for you and fact check it and then go back to the briefing. For now, let’s begin this briefing.”) Cut out at 6:29 PM. (Todd: “All right. We figured this would be a good time to do one of our fact checks in real time here.”) Re-joined at 6:37 PM and cut out at 6:50 PM, re-joined at 6:54 and cut out at 7:15 PM during q and a with Trump. Re-join ed at 7:19 and stayed until the end. [50 of 67 minutes]

>> Thanks to Curtis Houck for double-checking the math, Bill D'Agostino for putting togther the video compilation and Gabriella Castro-Vidal for creating the bar graph. <<