Columnist Mark Shields Despairs George W. Bush Too Honorable to Use as Bogeyman 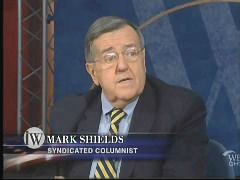 It will be “very difficult for Democrats to demonize” George W. Bush “again” during this campaign season, liberal nationally syndicated columnist Mark Shields despaired on Friday’s Inside Washington, because he’s “a circumspect and discreet former President.” Quite unlike, he didn’t say, the often boorish Bill Clinton and Jimmy Carter.

The problem for the Democrats is this, that the energizer bunny for the 2006, 2008 campaigns has disappeared because of George W. Bush’s being a circumspect and discreet former President it makes it very difficult for Democrats to demonize him again. He’s become a non-person. He shows up at a ball game once in a while, he greets soldiers coming back. He hasn’t said anything controversial and that makes it a tougher fight for Joe Biden to make.

Charles Krauthammer is a regular on the weekly program, so I’ll use that as a hook to highlight his latest column, “The last refuge of a liberal,” which includes this well-framed observation:

Promiscuous charges of bigotry are precisely how our current rulers and their vast media auxiliary react to an obstreperous citizenry that insists on incorrect thinking. 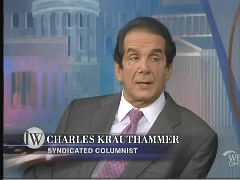 -- Resistance to the vast expansion of government power, intrusiveness and debt, as represented by the Tea Party movement? Why, racist resentment toward a black president.

-- Disgust and alarm with the federal government's unwillingness to curb illegal immigration, as crystallized in the Arizona law? Nativism.

-- Opposition to the most radical redefinition of marriage in human history, as expressed in Proposition 8 in California? Homophobia.

-- Opposition to a 15-story Islamic center and mosque near Ground Zero? Islamophobia.

Another great formulation, about how those tricky Tea Party activists weren’t clever enough to fool the liberal media:

When the Tea Party arose, a spontaneous, leaderless and perfectly natural (and traditionally American) reaction to the vast expansion of government intrinsic to the president's proudly proclaimed transformational agenda, the liberal commentariat cast it as a mob of angry white yahoos disguising their antipathy to a black president by cleverly speaking in economic terms.