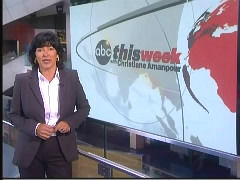 In her debut Sunday morning as host of ABC’s This Week with Christiane Amanpour, the long-time CNN international correspondent brought a foreigner’s perspective to the program as she treated her lack of knowledge and familiarity with U.S. politics as an asset and the current New York City resident seemed to say that after more than two decades of covering the world she had decided to allow herself to deal with U.S. politics now that “the story in this country is turning into one of the most fascinating.” She asserted in an opening explanation: “I'm also eager to open a window on the world.”

In her interview with House Speaker Nancy Pelosi she approached the Speaker as an empathetic liberal confused about why the public would vote in Republicans after all of the Democratic achievements (“You, by all accounts, are one of the most, if not the most, powerful and successful Speakers in the history of the United States. You’ve passed so much legislation...”) and fretted about “so much polarization” against Pelosi as exemplified by an anti-Pelosi ad which Amanpour described as painting Pelosi as “the bogeyman.” Amanpour despaired: “There seems to be a never-ending partisanship. What is it you can do for the people in this highly-polarized situation?”

She framed questions to Pelosi around phrases such as “from an outsider’s point of view” and “for me, looking in from outside.” Amanpour displayed less ideological affinity and was more engaged and informed about Afghanistan when she quizzed Secretary of Defense Robert Gates. 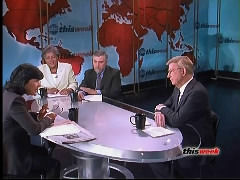 She provided a “power house roundtable” little different, in a key way, from the George Stephanopoulos days since George Will was out-numbered two-to-one by Donna Brazile and Paul Krugman. Amanpour’s addition: Pakistani journalist Ahmed Rashid, who appeared from Madrid and whom Amanpour touted as “the world authority on the Taliban.” Prompting Will’s visual disagreement, Amanpour insisted: “The Financial Times is basically saying that deficit talk is a phony rhetorical war and that actually the stimulus has had some effect. You're shaking your head.”

The new international flavor, symbolized by a spinning globe in the bottom corner of the screen whenever names or topics are identified on screen and a world map background on set for shots that don’t show the Capitol dome, began with the opening from the announcer: “From all across our world, to the heart of our nation’s capital, ABC This Week with Christiane Amanpour starts now.”

Amanpour added an international take to the “In Memoriam” with new introductory words to the listing of soldiers and Marines killed in Afghanistan and Iraq, phraseology which put the U.S. deaths second to all the wars around the world: “We remember all of those who died in war this week. And the Pentagon released the names of eleven U.S. service members killed in Afghanistan.”

The “In Memoriam” and “Sunday Funnies” segments remained, but she ended with a new “Picture of This Week” segment, the first one devoted to global warming fears: 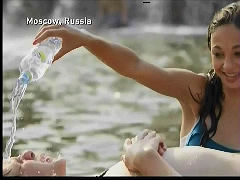 And finally this morning, our Picture of This Week. NOAA, the National Oceanic and Atmospheric Administration, released its state of the climate report this week. It concludes that the past decade was the warmest on record and that the earth has been growing warmer over the past 50 years. So we leave you with pictures from here and around the world of people cooling off from a very hot July.

(For examples of Amanpour’s liberal approach on CNN, check out the MRC’s “Profile in Bias” on her, “Christiane Amanpour: Top Ten Notable Quotes from a Liberal Career.”)

Her very first words, teasing her first show, conveyed her empathy with Pelosi and befuddlement over why voters would go another direction:

Good morning. I'm Christiane Amanpour. And at the top of the news this week: the Speaker of the House, Nancy Pelosi. She's won big victories on health care, the stimulus, and financial reform. But is her party at risk of losing the House in November? [to Pelosi] How did this happen?

(Amanpour’s empathy toward, and admiration of, Speaker Pelosi fits in well at ABC. It matches the approach from Diane Sawyer and Charlie Gibson:

From March, after ObamaCare passed: To 'Indefatigable' Pelosi, Sawyer Wonders What Her Dad and Mom 'Would Have Said About this Moment?'

From January of 2007, upon becoming House Speaker: Gibson on Pelosi: 'Taking Care of the Children and the Country' )

Amanpour’s opening explanation tried to answer why she took the new job. In short, she’s slumming to help bring the world to the ill-informed Americans:

Good morning. I am thrilled be here at the Newseum. After 20 years covering the world, the story in this country is turning into one of the most fascinating. The struggle over politics and policy and how they merge to meet people's needs. And having witnessed firsthand the global challenges and opportunities that America faces every day, I'm also eager to open a window on the world and cut through those complicated issues that we all confront.

Amanpour’s questions to Pelosi, recorded in the Speaker’s U.S. Capitol office on Friday, picking up after she pressed her repeatedly on declining Democratic support for Obama’s Afghanistan policy and wondered: “Afghanistan, is it worth it? Is it worth it?” The questions:

> Let's go to something much closer to home right now at the moment and that is the ethics conundrum with Representative Rangel. How does your affection, your respect for him as a colleague, square with what's going on right now? And what you said and declared that this is going to be the most ethical Congress, that you're going to drain the swamp of any kind of wrongdoing, corruption, et cetera?

> Can you see Congressman Rangel ever returning as Chairman of the Ways and Means or any position of leadership in the House?

> Let me ask you about the midterm elections. You, by all accounts, are one of the most, if not the most, powerful and successful Speakers in the history of the United States. You’ve passed so much legislation. The President was elected with a significant majority. You had control of both houses of Congress. And yet, now, people are talking about you might lose your majority in the House. The gap seems to be growing wider between what's achieved and what’s making an impact with the people. How did this happen?

[PELOSI: Well, that's one version of the story as you pose it-] 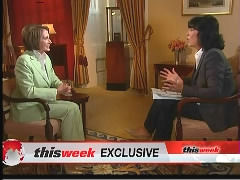 > But from an outsider’s point of view, many people are asking that. How did you get to the place where perhaps you might lose your majority?

> Are you nervous about November?...Not at all? I know you're putting on great face as people have to going into an election. But people say there's considerable worry about what will happen in November.

> So what did it make you feel, then, when the President's own spokesman said that you might lose the majority?

> Let me ask you about the tax cuts. Are you going to take that issue to a fight before the elections, letting the tax cuts for the $250,000 expire and then keep them on for the middle class?

> There's so much polarization, so much partisanship, not just amongst the politicians but in the press, amongst the people. You’ve talked a little about what’s, you know, us and them in your view. I want to show you this which is a Republican commercial.

> What do you think about that, you being the bogeyman?

> For me, looking in from outside, it just seems there seems to be a never-ending partisanship. What is it you can do for the people in this highly-polarized situation?

A few of her more challenging/contrarian questions to Gates:

> So many people are arranging their schedules for 2011. The summer of 2011. My question to you is this. What can General Petraeus do to defeat the Taliban at their own game? What can he do now in Afghanistan to avoid the deadline they're setting for themselves?

> Final question. Do you think the way out is to strike a deal with the Taliban?