As Stephanopoulos Leaves 'This Week,' News of a Booster Seat in the Morning 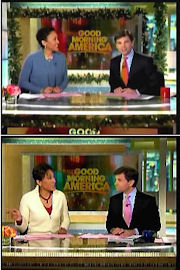 At the end of Sunday’s This Week this morning, George Stephanopoulos announced it was his last broadcast as the host (“That’s our show for today. It is also my last regular Sunday here at This Week. Thanks to all of you for watching so faithfully for all these years and thanks to the outstanding crew and staff here at This Week for making it the special program it will always be”) and an item in Sunday’s Boston Herald revealed that ABC had to purchase a special chair for Stephanopoulos, in his new job as co-host of Good Morning America, so Robin Roberts would no longer “tower over” the “diminutive talking head.”

The Herald's “Inside Track” disclosed: “All it took was a new chair from Staples.com!” Gayle Fee and Laura Raposa relayed that “when Stephanopoulos began his early-morning gig last month, the anchor desk appeared out of sync -- with Roberts, who is 5-foot, 10-inches tall, and George, who is soooo not.”

(The accompanying top screen shot is from December 14, Stephanopoulos’s first day as the new permanent co-host and the image below is from this past Thursday’s program. Judge for yourself, but Stephanopoulos is certainly lower in both.)

ABC’s new morning man jokingly told reporter Rob Shuter at popeater.com: “I would have been happy with phone books, but I’m glad they found a solution.”

When we asked a Staples rep which of the office supplier’s chairs the show’s set designers bought for George, a rep told us That Was(n’t) Easy info to score...

(The local angle: Staples is headquartered in Framingham, Massachusetts, a Boston suburb.)

Stephanopoulos’s departure announcement would suggest ABC will soon name his replacement, with Terry Moran, Jake Tapper, Ted Koppel and Gwen Ifill among those most-discussed as the likely candidates. TVNewser reported this morning:

ABC tells us Jake Tapper is scheduled to anchor on the 17th and Terry Moran is scheduled for the 24th. The program will no longer have Stephanopoulos' name in the title and will re-branded as simply "This Week" again.