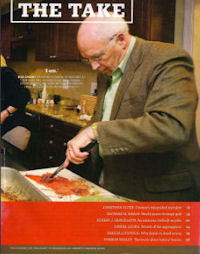 Famed news photographer David Hume Kennerly took to the New York Times' “Lens” blog last week, with an update on Monday in which he denounced Newsweek's “skewed imagery to advance its editorial agenda,” to excoriate the magazine for “photo fakery” in how it cropped a picture he took of former Vice President Dick Cheney to imply “something sinister, macabre, or even evil was going on.” Kennerly proposed: “The Sept. 14th Newsweek cover line -- 'Is Your Baby Racist?' -- should have included a sub-head, 'Is Dick Cheney a Butcher?'”

Newsweek used the cropped photo from Getty Images for its “The Take” section with this caption: “'I am.' Dick Cheney on Fox News Sunday, in response to the question, 'So even these cases where [CIA interrogators] went beyond the specific legal authorization, you're OK with it?'” Kennerly explained:

Featured inside the magazine was a full-page, stand-alone picture of former Vice President Dick Cheney, knife in hand, leaning over a bloody carving board. Newsweek used it to illustrate a quote that he made about C.I.A. interrogators. By linking that photo with Mr. Cheney’s comment and giving it such prominence, they implied something sinister, macabre, or even evil was going on there. [Original, un-cropped, photo below the jump]

I took that photograph at his daughter Liz’s home during a two-day assignment, and was shocked by its usage. The meat on the cutting board wasn’t the only thing butchered. In fact, Newsweek chose to crop out two-thirds of the original photograph, which showed Mrs. Cheney, both of their daughters, and one of their grandchildren, who were also in the kitchen, getting ready for a simple family dinner. 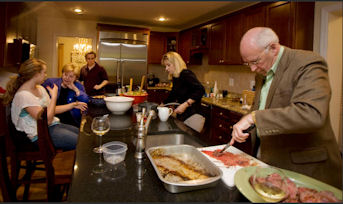 However, Newsweek’s objective in running the cropped version was to illustrate its editorial point of view, which could only have been done by shifting the content of the image so that readers just saw what the editors wanted them to see. This radical alteration is photo fakery...

This incident is another example of why many people don’t believe what they see or read. And America clearly notices these shifts in journalism. This week, the respected Pew Research Center for the People and the Press released a poll [NewsBusters summary of it] stating that nearly two-thirds of Americans surveyed believe that news stories are inaccurate and biased -- 25 years ago, the number was half that....

We doubt any reasonable reader would, in David’s phrase, think something “sinister, macabre, or even evil” was going on in that image as presented. Yes, the picture has been cropped, an accepted practice of photographers, editors and designers since the invention of the medium. We cropped the photograph using editorial judgment to show the most interesting part of it. Is it a picture of the former vice president cutting meat? Yes, it is. Has it been altered? No. Did we use the image to make an editorial point -- in this case, about the former vice president’s red-blooded, steak-eating, full-throated defense of his views and values? Yes, we did.

....I agree with Frank A. Binder, who commented that Newsweek’s spokesman ‘confirms the photographer’s protest. A photo was cropped to support a bias in reporting.’

The issue, of course, is not just about cropping. It is about the erosion of credibility in the news business in general. The great journalist Edward R. Murrow said, ‘In seeking the truth, you get both sides of the story.’ In this instance, and by its spokesman’s own admission, Newsweek never intended to seek the truth — but instead, and unapologetically, skewed imagery to advance its editorial agenda.

I’m grateful to my professional colleagues for their thoughtful responses, and their deep concern about the trend away from Murrow’s truth-seeking journalistic model.