Flashback: Nets Were Quick to Tag Alito and Roberts as 'Ultra' and 'Hardline' 'Conservatives' 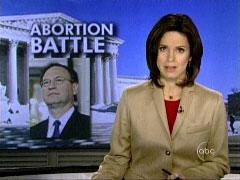 Network anchors and reporters didn't hesitate to apply strong ideological labels (not just quoting others) to President Bush's two Supreme Court nominees, John Roberts and Samuel Alito. Will they be as willing to tag President Obama's nominee, U.S. Appeals Court Judge Sonia Sotomayor, as “staunch,” and “hardline” and “ultra” liberal, or at least as “very liberal”?

In July of 2005, on the night Bush announced Roberts, ABC's George Stephanopoulos and Ted Koppel both described him as not just conservative, but as “very conservative.” NBC's Brian Williams called Roberts “a kind of 'bedrock conservative,' not what is called a 'movement conservative.'”

The next night, CBS Evening News anchor John Roberts (now with CNN) wanted to know of his namesake: “Has President Bush attempted to move the court further to the right with this pick?” On NBC, Chip Reid (now at CBS) highlighted how one liberal activist “says he worries that Roberts might be a stealth candidate, moderate on the outside but as conservative as Justices Scalia and Thomas on the inside.”

A little more than three months later with Alito, several reporters repeatedly applied a conservative tag or added adjectives to suggest he's out of the mainstream. On ABC's October 31 Good Morning America, Jessica Yellen (now with CNN) issued five labels in under 50 seconds, describing Alito as someone who will please Bush's “conservative base,” has “established conservative credentials,” is “a law and order conservative,” who is “in the mold of conservative Justice Antonin Scalia” and whose “writing is so similar to the conservative justice's, he's sometimes nicknamed 'Scalito.'” Just before Bush's announcement, Charles Gibson called Alito “very conservative” and “the most conservative member” of the otherwise “liberal appellate court.” Gibson soon repeated himself: “The President has picked somebody very conservative.”

Over on CBS's Early Show, Gloria Borger dubbed Alito “quite conservative,” the same label applied a few minutes earlier on CNN's Daybreak by Carol Costello before Jeffrey Toobin applied the “very conservative” tag. NBC's Katie Couric asserted that Alito “could be a controversial choice” because he's “a favorite on the right and he would replace moderate justice Sandra Day O'Connor.”

On ideological labeling, ABC anchor Elizabeth Vargas asserted on the October 31, 2005 World News: “Conservatives are thrilled, liberals incensed.” She went on to relay that “he is said to be brilliant and a staunch conservative.” CBS anchor Schieffer saw Democrats not liberals when he touted how Bush has “made the conservatives happy, but the Democrats are upset.” John Roberts proceeded to assert: “Alito's judicial philosophy so mirrors that of the Supreme Court's hardliner, Antonin Scalia, that he's been nicknamed 'Scalito.'” Roberts ominously warned: “If confirmed, Alito would wipe out the swing seat now occupied by Sandra Day O'Connor, tilting the Supreme Court in a solidly conservative direction for years to come.”

The following week on NBC's Today, co-host Matt Lauer applied an extreme ideological tag to Alito, telling former Senator Fred Thompson: “Let's face it, he is an ultra-conservative and his track record on the bench is that he, he, [talking over Thompson] he goes to the right on key issues.” Thompson rejected the label. Lauer also fretted that if Alito is confirmed, “eight of the nine Supreme Court justices will be men, eight of the nine will be white, eight of the nine will have law degrees from either Harvard or Yale, five of the nine will be Catholic. What does that say about the, the Court's ability to reflect and, and, and rule on behalf of the diverse population of this country?”
Roberts Nomination Alito Nomination Sotomayor Nomination CNN Today NBC Nightly News Good Morning America Early Show CBS Evening News American Morning World News Tonight History Obama Watch Chip Reid