Offering the most hyperbolic take of the night on the crowds who attended President Obama's inauguration, on World News ABC's Bill Weir delighted in wondering “can national pride make a freezing day feel warmer?” He decided it can indeed since “never have so many people shivered so long with such joy” while “from above, even the seagulls must have been awed by the blanket of humanity.” Weir was certainly awed.

Meanwhile, over on the NBC Nightly News, anchor Brian Williams must have been as awed as those seagulls since he contended he could “feel” the masses watching from around the nation: “While it was unfolding today here in Washington, you could feel the millions around the country who were watching it all.” 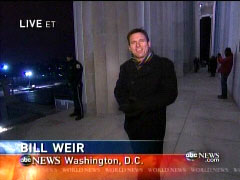 We know that wind can make a cold day feel colder, but can national pride make a freezing day feel warmer? It seems to be the case because regardless of the final crowd number estimates, never have so many people shivered so long with such joy. From above, even the seagulls must have been awed by the blanket of humanity...

The night before, Weir credited Obama for calming DC. My NB item, “And Obama Shall Bring Tranquility to the Land,” recounted:

Is there anything President-elect Barack Obama's very aura cannot make better? Apparently, he has eliminated road rage -- and even honking.

ABC's David Muir, over video of stuck traffic followed by the sound of singing, in a Monday World News story on the crowds coming to Washington, DC: “So many of the streets are closed those that are open are clogged. But there were no car horns, no shouting. Instead, the San Francisco Boys and Girls choruses practicing for their Inaugural moment on the steps of the Capitol.”