ABC: McCain Would Help 'Wealthiest,' Obama to Cut Taxes for '95%' 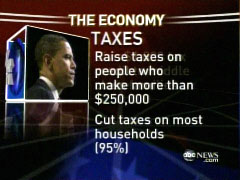 ABC reporter David Wright on Tuesday night, forced to summarize the tax plans of John McCain and Barack Obama in 30 seconds, described them through a distorted liberal prism. Though McCain wishes to continue all the income tax rates from the Bush tax cuts, with no hike or decrease for any income level, Wright asserted: “He'd make permanent the Bush tax cuts for the wealthiest Americans.” No, for all Americans.

Obama, Wright proceeded to report, “would raise taxes on the wealthy, people who make more than $250,000 a year, but cut them for most households.” The text on screen, however, stated an impossibility: “Cut taxes on most households (95%).” That 95 percent is impossible since one-third of those who file with the IRS are “non-payers,” people who end up paying no tax or get money back which exceeds their payments. Obama plans to expand the Earned Income Tax Credit (EITC) and create other credits. For those for whom the credits surpass their tax obligation, those are not tax cuts, but spending hikes or federal giveaways akin to welfare.

A June report from the Tax Foundation listed 32.58 percent of IRS income tax returns for 2005 as “non-paying.”

Wright's September 16 story on how the two candidates approach the economy was the premiere of a new World News series: “What's the Difference”? Where Wright summarized their tax plans: 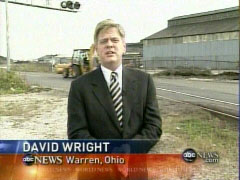 Perhaps the sharpest difference between the two is on the taxes people pay. McCain believes cutting taxes across the board would promote economic growth. He'd make permanent the Bush tax cuts for the wealthiest Americans, cut corporate taxes and double the personal exception for dependents.

Obama would raise taxes on the wealthy, people who make more than $250,000 a year, but cut them for most households. He's give middle class families a thousand-dollar tax credit and cut tax taxes completely for seniors on fixed incomes.

This is not the first time ABC has exaggerated how many would benefit from Obama's tax plan. My Sunday NewsBusters item, “Gibson Advanced to Palin What Hume Calls an Obama 'Dishonesty,'” recounted:

Speaking of "dishonesty" in McCain's TV ads, on Fox News Sunday Brit Hume pointed out Barack "Obama goes around claiming he's going to cut the taxes of 95 percent of the public, which is literally impossible" since "40 percent of American taxpayers don't pay any income tax," but that hasn't stopped ABC (directly) and CBS (implicitly) in recent days from advancing that Obama claim as fact. Charles Gibson, in his third interview session with Sarah Palin excerpted on Friday's 20/20 and Nightline, stated that Obama will extend the "Bush tax cuts on everything but people who own or earn more than $250,000 a year -- cuts taxes on over 91 percent of the country."

Excerpts from a Tax Foundation summary (PDF) of the McCain and Obama tax plans:

Continue the lower rates enacted in the 2001-03 tax cuts.

Phase out the AMT.

Maintain the 15% rate on capital gains and dividends.

Create a new "Making Work Pay" refundable income tax credit of up to $500 per person or $1,000 per family. It would offset the payroll tax on the first $8,100 of earnings.

Give full-time workers making minimum wage an Earned Income Tax Credit benefit up to $555. If the workers are "responsibly supporting their children on child support," give
those workers a benefit of $1,110.

Raise capital gains and dividends rates to somewhere between 20% and 28%, keeping them equal.