CBS's Greenfield: Conservative Might Have Been Hypocrites on Pregnant Chelsea Clinton 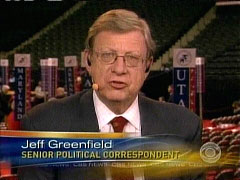 Instead of just flat-out making a hypocrisy accusation against “the social conservatives” who “are rallying behind” Republican vice presidential nominee Sarah Palin following news her 17-year-old daughter is pregnant, CBS's Jeff Greenfield suggested “very conservative Republicans” may be hypocrites based on how they might have reacted eleven years ago. On Monday's CBS Evening News, Greenfield, at the site of the delayed Republican convention, felt compelled to share:

The one question that occurs to me is if 17-year-old Chelsea Clinton had become pregnant while living in the White House, would the reaction on the part of the Family Research Council and other very conservative Republicans been the same? Maybe it would have been, but it's a question worth asking.

Meanwhile, during the CBS News special at 10 PM EDT, Katie Couric whined to Nicolle Wallace of the McCain campaign: “Why wasn't the campaign, your campaign more pro-active about releasing this information? Why did you wait until sort of rumors and innuendos forced your hand?” Couric implied Bristol Palin's pregnancy should have disqualified her mother and suggested Sarah Palin was not putting her daughter's interests first. 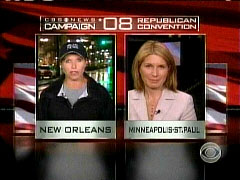 Now I understand that this information, this news about Sarah Palin's daughter did, in fact, come out during the vetting process. When Senator McCain or the McCain campaign was told of this, did it give them or the Senator any pause?

So during the vetting process, did Governor Palin ever express concern to you all that this might be too much to put her daughter through -- this white hot light of scrutiny and publicity?

After inquiring about why the campaign was not “more pro-active about releasing this information,” Couric moved on to questions about Palin's “professional credentials” and what Wallace guessed to be a question about Palin only being Governor for two years – satellite break-up for Couric in New Orleans meant only a few of her words could be heard.

Back to the September 1 Evening News, Greenfield's initial take on the Palin pregnancy and the fears of “graybeard” and “elitist” Republicans:

On the Sarah Palin-Bristol Palin story about the child: The social conservatives are rallying behind her completely. The Family Research Council, one of the most significant groups, put out a statement saying the decision to marry and have a child is in full sync with family values. I think it's fair to say among the more traditional, maybe graybeard, maybe elitist Republicans -- if that's the right word -- there is some concern about what this tells us about the vetting process and a lot of concern about the fact that Governor Palin is so unknown that there may be stuff out there about her political background, financial background, the fact that she was for that infamous bridge to nowhere before she came out against it may not have been known to the McCain people. That's the sort of thing they're worried about, Katie.