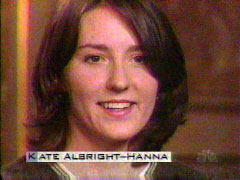 Kate Albright-Hanna, who runs the Obama campaign's online video operations, got the job after she pitched the campaign “a proposal on video strategy” -- while she was still a CNN producer. A Wednesday Washington Post “Style” section feature on the key members of the “Triple O: Obama's online operation,” recounted the how and when of her pitch to Joe Rospars, a Howard Dean campaign veteran in charge of the so-called Triple O:

An Emmy winner, she joined CNN's political unit in 1999 and met Rospars while filming a documentary on Dean. When she heard that Rospars was working for Obama, Albright-Hanna called and said she wanted to produce a doc on Obama. The campaign planned to develop its own video content, Rospars said. Intrigued, Albright-Hanna sent him a proposal on video strategy. Weeks later, she left CNN and moved with her husband and 3-year-old son to Chicago.

The key phrase: “weeks later, she left CNN...” So while working at CNN she was simultaneously developing a plan for Obama which, given their decision to hire her, they liked and she's implementing.

Before CNN, she was an intern in the Clinton White House and, in a Dateline NBC story days after the Monica Lewinsky story broke, she was featured by reporter Dawn Fratangelo as one of a group of former interns who “simply don't find it plausible the President of the United States could have an affair with an intern.” In a soundbite (see slightly snowy screen shot from the MRC's archive), Albright-Hanna asserted: “I can't imagine how that would happen.”

In the story on the Friday, January 23, 1998 Dateline NBC, Fratangelo said Albright-Hanna “works for NBC News.” The relevant portion of that program:

DAWN FRATANGELO: Even though Monica Lewinsky worked in the West Wing for several months, and most likely had a prized blue pass, these former interns simply don't find it plausible the President of the United States could have an affair with an intern.

MALE INTERN: I don't see how an intern has such access to the President and no one knows.

KATE ALBRIGHT-HANNA: When I was there, I always felt like I was on a stage, like the whole White House -- I felt like everybody was watching what was going on, and there's just that whole atmosphere of being careful. That's why I'm shocked by the allegations. I just, I can't imagine how that would happen.

(The CNN documentary on Dean, which aired the first weekend in March of 2004, was narrated by Aaron Brown.) 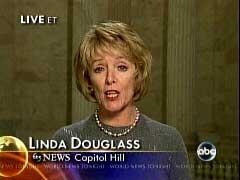 Marc Ambinder revealed Wednesday, on his blog for The Atlantic magazine, that his colleague at National Journal, Linda Douglass, a long-time CBS News and then ABC News Washington bureau reporter until 2006, "will join Barack Obama's presidential campaign as a senior strategist and as a senior campaign spokesperson on the roadshow, a newly created position." Ambinder, a colleague at National Journal, reported: "Douglass confirmed her new position when I walked up to the ninth floor, knocked on her door, and asked her about it. She informed National Journal President Suzanne Clark this morning of her impending departure. 'I see this as a moment of transformational change in the country and I have spent my lifetime sitting on the sidelines watching people attempt to make change. I just decided that I can't sit on the sidelines anymore.'"

"Over 34 years in journalism," Douglass told Ambinder, "she grew disillusioned with the partisanship she saw first-hand." So, now she's joining a partisan campaign?

So far, Albright-Hanna's group has shot more than 2,000 hours' worth of footage and uploaded about 1,110 videos on Obama's YouTube channel -- more than four times what's available on Sen. John McCain's channel. For months, Obama's 37-minute race speech following the furor over the remarks of his former pastor has remained the channel's most watched video, seen more than 4.7 million times. But what's striking about Obama's channel is the breadth of its content. Though most of the videos are centered on the candidate -- his speeches and rallies, his TV and online ads, his TV appearances -- many others feature his supporters.

"Early on, we wanted to capture the sense that this campaign is not just about Obama," says Albright-Hanna, 32....

At least nine staffers have contributed to the video team -- an astounding figure compared with many mainstream news organizations and past campaigns. (McCain's aides declined to say how many videographers the campaign has. It has four staffers devoted to Internet activities, and has also hired an outside vendor.) Some travel with Obama and his press pack. Others work in the field. Some of the videos last less than five minutes; others go on for as long as 25. They're posted on BarackTV, the video portal on BarackObama.com, and on YouTube.

A 13-minute video featuring students at the Bronx High School for Performance and Stagecraft, for example, shows black and Hispanic teenagers talking about their school's racial atmosphere and their reaction to Obama's race speech in Philadelphia. "I like...how [Obama] always says blacks, whites, Spanish, Asian," Ryston Buchanan, a junior, says in the video. "He says all the races, so you can see that he's not focused on one group of people." Albright-Hanna shot that video herself, and it's been viewed more than 400,000 times.

"I guess I've kind of been rebelling from my CNN days, where video had to be a certain length, a certain format with a certain sensibility. Where I came from, there's a lot of concern about ratings and about what they think people, everyday people, are interested in watching," Albright-Hanna says. "Here, we don't worry about how many views our videos get. That's not the priority. One of our goals is to get people talking about what's going on in their lives and why they're supporting Barack -- and hopefully not only will they watch the videos but also comment on them and forward them to relatives and friends and co-workers."

Last year, when reporters and pundits saw Clinton as the front-runner for the nomination, Albright-Hanna's team tried to capture how Obama's excited supporters were organizing. In December, weeks before the Iowa caucuses, a two-minute video was posted telling the story of Helen Kwan, an Obama precinct captain in Bettendorf, and Lilah Bell, a 99-year-old Obama volunteer who planned to caucus for the first time....