Stephanopoulos to McCain: 'I Can't Believe You Believe That' 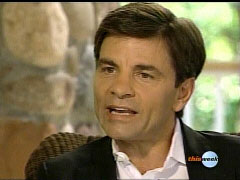 As McCain continued to defend his assessment, Stephanopoulos kept rejecting his reasoning (“So putting lives at risk for a political campaign, you believe he's doing that?”) and excoriating his characterization of Obama: “But you're questioning his motives.” 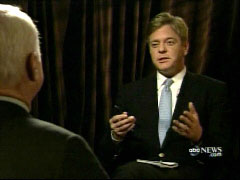 Wright began his interview with McCain by scolding him for his “extraordinary statement” that “Obama would rather lose a war in order to win a political campaign.” Wright demanded: “Do you really think he's that craven?” Wright also lectured: “But what you seem to be saying there is that it's all about personal ambition for him and not about what he honestly thinks is right for the country.”

The exchange on the Sunday, July 27 This Week in the interview taped the day before in Arizona, with McCain's dogs walking around them at least once:

GEORGE STEPHANOPOULOS: You've taken heat this week with your comments saying that Senator Obama would rather lose a war than win a political campaign. I can't believe you believe that.

McCAIN: All I'm say something is, and I will repeat, he does not understand. I'm not questioning his patriotism. I am saying that he made the decision which was political in order to help him get the nomination. 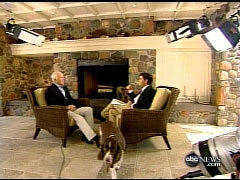 STEPHANOPOULOS: So putting lives at risk for a political campaign, you believe he's doing that?

McCAIN: I believe that when he said that we had to leave Iraq and we had to be out by last March and we had to have a date certain, that was in contravention to and still is to the Chairman of the joint chiefs of staff, General David Petraeus. When he never asked to sit down for a briefing with General Petraeus, our commander on the ground, when he waited 900 days to go back again where young American lives are on the line, I think that's a fundamental lack of understanding and I think the American people will make the appropriate choices.

STEPHANOPOULOS: But you're questioning his motives.

McCAIN: I say that it was very clear that a decision had to be made, and I made it when it wasn't popular. He made a decision which was popular with his base, and that is a fundamental difference and he does not understand and did not understand and still doesn't understand that the surge was the vital strategy in us not having to lose a war, chaos, genocide, increased influence of Iranians in the region, the consequences of failure would have been severe. Now the benefits are enormous of a stable ally in the region, of a country that is a friend of ours, a break on Iranian influence, certainly a break on al Qaeda and other jihadist organizations. So he made the decision that that was the best way to go to get the nomination of his party.