Day 1 of Obama's Magical Media Tour: All Air from Outside the Paint! 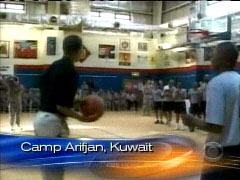 A great first day on national television news for Barack Obama as he began his much-hyped overseas trip with a stop in Kuwait before moving on to Afghanistan. CNN anchor Rick Sanchez, seemingly channeling the media's own excitement, on Saturday night hailed it as “a trip that seems to be captivating the rest of the world as much, if not more so, than many in the United States.”

ABC, CBS and CNN showcased video of Obama making a basketball shot at a gym with troops in Kuwait. Over video troops cheering Obama as he walked into the gym, on ABC's World News Jim Sciutto touted: “Though the destinations were new, the greeting was familiar. Senator Barack Obama signing autographs with soldiers on his first stop in Kuwait, even taking time to play some basketball...” Forrest Sawyer, anchoring the CBS Evening News on Saturday night, apparently with a new job after many years with ABC and MSNBC, highlighted how Obama “sank a shot from way outside the paint.” Sawyer announced over matching video:

Now, before Afghanistan Senator Obama stopped off in Kuwait to talk to the troops there. You remember all that grief Obama got for being a terrible bowler? Well, at a local gym someone handed him a basketball and he promptly sank a shot from way outside the paint. He made it look easy. You just have to pick the game. 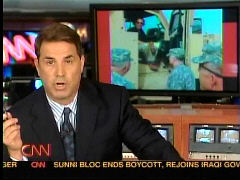 Tonight you're going to be seeing the very first pictures of presidential candidate Barack Obama overseas with U.S. troops. Those are stills that you're looking at behind me that we've beeen getting from this trip by this junior U.S. Senator, a trip that seems to be captivating the rest of the world as much, if not more so, than many in the United States...

Let me give you a quick set up on this next piece of video. Senator Obama goes into the gym afterward and shoots a free-throw. Then he mingles with some of the soldiers. One female soldier, in particular, challenges him to try and do it again. Now, watch this as it plays out.

CBS will get the first “exclusive” even before each of the three anchors have exclusives for the day with Obama in the upcoming week. On Saturday's CBS Evening News, Sawyer twice plugged Lara Logan's “exclusive” Obama interview to air Sunday morning on Face the Nation.
2008 Presidential CNN CBS Evening News World News Tonight Rick Sanchez Forrest Sawyer Jim Sciutto