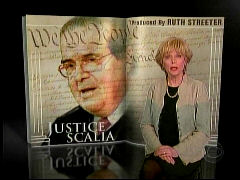 In her two-part profile of Supreme Court Justice Antonin Scalia aired on Sunday night's 60 Minutes, Lesley Stahl seemed repeatedly surprised by how Scalia in person isn't the “polarizing figure” who protesters call a “fascist,” as she conceded: “What's interesting is the difference between how you appear in person and the image that you have. Because the writings are so often combative, and your friends say that you're charming and fun.” In short, Scalia really does not match the left-wing characterization of him adopted by Stahl's media colleagues.

Stahl opened her piece by describing Scalia as “one of the most brilliant and combative justices ever to sit on the court” before contending that he “is a polarizing figure who invites protestors and picketers.” As she spoke, viewers heard from a man with a matching sign: “Scalia is a fascist!” Stahl told Scalia what she's heard about him: “'He's evil.' 'He's a Neanderthal.' 'He's going to drag us back to 1789.'” Stahl informed him: “The public sense of you is that you make your decisions based on your social beliefs.” Citing “Roe v. Wade and affirmative action,” she elaborated, “His critics argue that originalism is a cover for what they see as Justice Scalia's real intention: to turn back some pivotal court decisions of the 60s and 70s.”

Stahl began the second segment, on Scalia's childhood in New York, his wife and kids and his future, by acknowledging, “In spending time with him, we found something we hadn't expected: a person so unpretentious and down to earth, you could easily forget he sits on the Supreme Court.”

CBS News.com has a rough transcript with complete video of the two segments.

Some excerpts from the stories on the April 27 edition of 60 Minutes:

LESLEY STAHL Not many Supreme Court justices become famous. Antonin Scalia is one of the few. Known as "Nino" to his friends and colleagues, he's one of the most brilliant and combative justices ever to sit on the court and one of the most prominent legal thinkers of his generation.

He first agreed to talk to us about a new book he's written about how lawyers should address the court. But over the course of several conversations, our story grew into a full-fledged profile -- his first major television interview -- including discussions about abortion and Bush v. Gore.

At 72, Justice Scalia is still a maverick, championing a philosophy known as "orginalism," which means interpreting the Constitution based on what it originally meant to the people who ratified it over 200 years ago.

Justice Scalia has no patience with so-called activist judges, who create rights not in the Constitution -- like a right to abortion -- by interpreting the Constitution as a "living document" that adapts to changing values.

He's on a mission as an evangelist for originalism, at home and around the world. Here he is at the Oxford Union in England.

JUSTICE ANTONIN SCALIA: Sometimes people come up to me and inquire, “Justice Scalia, when did you first become an originalist?” You know, as though it's some weird affliction, you know, “When did you start eating human flesh?” [laughter from students]

STAHL: They may be laughing, but in the U.S. Justice Scalia is a polarizing figure- 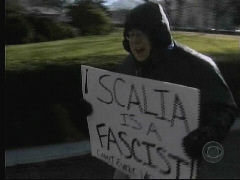 -who invites protestors and picketers. There haven't been many Supreme Court justices who become this much of a lightening rod.

STAHL TO SCALIA: I’m surprised at how many people really, really hate you. These are some things we've been told: “He’s evil.” “He's a Neanderthal.” “He’s going to drag us back to 1789.” They're threatened by what you represent and what you believe in.

SCALIA: These are people that don't understand what my interpretive philosophy is. I'm not saying no progress. I'm saying we should progress democratically.

SCALIA AT OXFORD: You think there ought to be a right to abortion? No problem. The Constitution says nothing about it. Create it the way most rights are created in a democratic society. Pass a law. And that law, unlike a Constitutional right to abortion created by a court can compromise. It can, oh I was going to say it can split the baby! I should not use -- a Constitution is not meant to facilitate change. It is meant to impede change, to make it difficult to change.

STAHL But his critics argue that originalism is a cover for what they see as Justice Scalia's real intention: to turn back some pivotal court decisions of the 60s and 70s. He's been labeled a "counterrevolutionary."

STAHL TO SCALIA: You've been labeled a “counterrevolutionary!"

STAHL: The idea being- 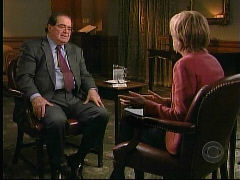 STAHL: The critics say his aim is to undo Roe v. Wade and affirmative action, and allow more religion in public life.

STAHL TO SCALIA: The public sense of you is that you make your decisions based on your social beliefs. That is the perception.

STAHL: I'm a law-and-order guy. I mean, I confess I'm a social conservative, but it does not affect my views on cases. On the abortion thing for example, if indeed I were, you know, trying to impose my own views, I would not only be opposed to Roe versus Wade, I would be in favor of the opposite view, which the anti-abortion people would like adopted, which is to interpret the Constitution to mean that a state must prohibit abortion.

STAHL TO SCALIA: What's interesting is the difference between how you appear in person and the image that you have. Because the writings are so often combative, and your friends say that you're charming and fun.

STAHL: He's a contrarian with a pugnacious temperament. He loves to "take 'em on," as he often does with the lawyers who argue cases before the court. Some of his victims from white shoe law firms have been brought to near tears under his scorching questioning.

STAHL He's nothing if not certain and confident. How did he get that way? Where and how the Justice grew up, when we come back.

STAHL, OPENING SECOND SEGMENT: Antonin Scalia's rise to Supreme Court justice is a distinctly American story. The son of an Italian immigrant, he earned his way into Harvard Law School through old-fashioned hard work and determination. In spending time with him, we found something we hadn’t expected: a person so unpretentious and down to earth, you could easily forget he sits on the Supreme Court. 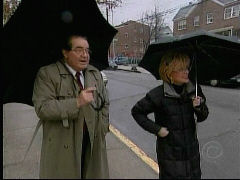 But what stands out is his sharp intelligence, and street-fighter personality which he developed growing up in New York City.

Scalia, after 22 years on the court, is starting another career as an author. His new book, Making Your Case: The Art of Persuading Judges, is surprisingly breezy in that it’s a primer for lawyers on how to win cases. His co-author is Bryan Garner, an expert on legal writing.

STAHL TO SCALIA: You say things in it like, ‘Be prepared. Look the judge in the eye.’ You almost make it sound like lawyers are imbeciles.

SCALIA: You would be surprised.

STAHL: They wrote the book together, occasionally sitting side by side, arguing. Surprisingly, Garner says, it was the justice who often showed humility by yielding.

GARNER: I thought you were very deferential, and surprisingly so. It was disarming to me.

STAHL: Scalia deferential? That's something you never hear about him on the court, where he has been unable to persuade his fellow justices to come over to his way of thinking. The only other originalist on the court is Justice Clarence Thomas.....