ABC, CBS and NBC All Fail to ID Indicted Mayor as Democrat 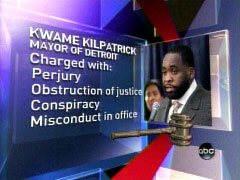 ABC anchor Charles Gibson announced on World News: “Detroit Mayor Kwame Kilpatrick was charged today with felonies that could cost him his job and 15 years in prison.” NBC Nightly News anchor Brian Williams relayed how “Detroit Mayor Kwame Kilpatrick...was indicted on perjury and other charges in the wake of a sex scandal there.” (NBC also refused to tag Kilpatrick in a full story aired Friday night.) Over on Monday's CBS Evening News, fill-in anchor Harry Smith introduced a full story: “In Detroit, a sex scandal led to criminal charges today against the Mayor, Kwame Kilpatrick, a married father of three.”

The brief update from Gibson on the Monday, March 24 World News on ABC (see graphic image above):


Detroit Mayor Kwame Kilpatrick was charged today with felonies that could cost him his job and 15 years in prison. Kilpatrick is charged, along with his female former chief of staff. Explicit text messages contradict their sworn testimony that they did not have an affair. Kilpatrick, charged with perjury, obstruction of justice, conspiracy and misconduct, says he expects to be cleared.

The short item from Brian Williams on the NBC Nightly News:


We are covering America tonight, beginning in Detroit, where Mayor Kwame Kilpatrick -- that's his police booking photo -- was indicted on perjury and other charges in the wake of a sex scandal there. The Mayor denied having an affair with his chief of staff until text messages showed otherwise. He faces up to 15 years in prison and expulsion from office, if he's found guilty. He said today he'll be exonerated. 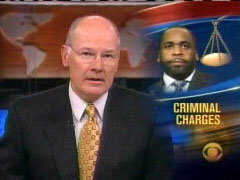 In Detroit, a sex scandal led to criminal charges today against the Mayor, Kwame Kilpatrick, a married father of three. Prosecutors say his own text messages prove he committed perjury. Dean Reynolds has the story.


At 38, Kwame Kilpatrick is the youngest Mayor in Detroit's history. Once an up-and-coming star, he now has another less-welcome distinction....prosecutors charged Kilpatrick with eight felonies, alleging he lied under oath about an affair with a top aide, blocked an investigation into it and used taxpayer dollars to hush it up.... 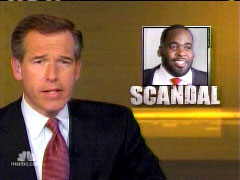 The week after it took the NBC Nightly News until the fourth day of coverage to inform viewers that disgraced then-New York Governor Eliot Spitzer is a Democrat, Friday's NBC Nightly News ran a full story on the scandalous behavior surrounding Detroit Mayor Kwame Kilpatrick, but never identified his political party. Naturally, given the lack of a party identification by the mainstream media journalists, he's a Democrat. Anchor Brian Williams set up the story: "The city of Detroit is in a crisis over government and leadership. The current Mayor is just the latest Detroit Mayor elected on a promise to clean up and revitalize the city. Now he's been caught in a sex scandal, a trail of electronic messages reportedly provides the evidence, it threatens his career and then some."

Reporter Kevin Tibbles, also sans any mention of a party affiliation, outlined: "The Detroit city council votes overwhelmingly to ask the Mayor to resign. 37-year-old Kwame Kilpatrick, in his second term of the Mayor of the Motor City, is mired in financial, political, and personal scandal, but refuses to budge."

The March 13 item by Rich Noyes, “Study: No (D) for Spitzer, Vitter and Craig Always Tagged as GOP,” explained:

The big three broadcast networks have gone out of their way to avoid labeling scandal-scarred New York Governor Eliot Spitzer as a "Democrat." An examination of the fifteen ABC, CBS and NBC morning and evening news shows through Wednesday night finds Spitzer was called a Democrat just 20 percent of the time -- twice on CBS, once on ABC, and never on NBC. So, how do the networks treat Republicans involved in sex scandals? Always, always as "Republicans." Looking at the ABC, CBS, NBC morning and evening shows in the days after the most recent scandals broke, Republican Senators David Vitter (July) and Larry Craig (August) were labeled "Republican" on every show (100 percent). Yet for Democrat Spitzer, four out of five news programs (80 percent) have skipped his party identification....