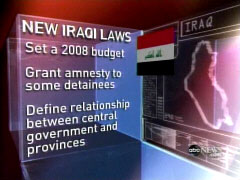 Overseas, in Iraq, a breakthrough for the country's government that has been so often criticized. Iraq's parliament approved three contentious, but crucial, new laws long sought by Washington. The laws set a budget for 2008, grant amnesty to thousands of detainees and define the relationship between the central government and the provinces.

A month ago, on January 14, Gibson was also the only broadcast network evening newscast anchor to cite how “Iraqi lawmakers have put their differences aside and agreed to allow some members of Saddam Hussein's Baath Party to take government jobs. It's a key benchmark sought by the United States.”

The CBS Evening News and NBC Nightly News on Wednesday night both found time to report on how Secretary of Defense Robert Gates broke his arm in a fall on ice and how, for the first time, a Beagle (named “Uno”) won “Best in Show” at the Westminster Dog Show. Gibson, who broadcast from Philadelphia, the site of the dog show, managed to note the development in Iraq as well as Uno's win.

Just as ABC's World News was ahead of CBS and NBC in October and November with news of improving conditions and decreased violence in Iraq, on Monday night ABC alerted weekday viewers to a positive development on the political front over the weekend. Gibson introduced a January 14 World News story from Hilary Brown in Baghdad: 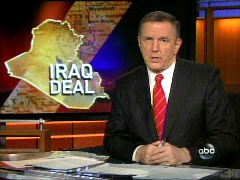 Overseas next, a significant political breakthrough in Iraq. Security has been improved there, but critics have wondered when political progress would come. Well, now Iraqi lawmakers have put their differences aside and agreed to allow some members of Saddam Hussein's Baath Party to take government jobs. It's a key benchmark sought by the United States. ABC's Hillary Brown reports...

...over the last five months, the broadcast networks have consistently reduced their coverage of Iraq, as if the story of American success in Iraq is less worthy of attention than their old mantra of American failure in Iraq.

Media Research Center analysts tracked all coverage of the Iraq war on the ABC, CBS and NBC evening newscasts from September 1 through January 31, and we documented a steady decline in TV coverage of Iraq that has coincided with the improving situation in Iraq. Back in September, the three evening newscasts together broadcast 178 stories about the war in Iraq; in January, that number fell to just 47, a nearly fourfold decrease....