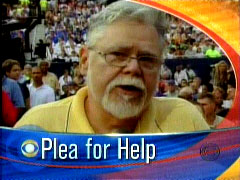 Tremendously exaggerating the number of Americans who lack access to health insurance, CBS on Wednesday night trumpeted the cause of an AFL-CIO member who denounced the United States for not providing health insurance coverage for his wife and endorsed the John Edwards plan for universal health care. Anchor Katie Couric previewed the upcoming story: “Presidential candidates hear a dramatic plea for help from one of the millions of Americans with no health insurance and no way to pay for it.” Setting up the tribute to the retiree, Couric asserted that “45 million Americans have no coverage. That includes more than 13 million between the ages of 19 and 29. Many of them don't get coverage from their jobs, and cannot afford to buy it on their own.” Of course, many can afford it and in that age range feel comfortable without insurance. In fact, 17 million of the uninsured earn more than $50,000. Removing those, plus people who are not U.S. citizens, leaves fewer than ten million chronically uninsured.

Reporter Michelle Miller began her CBS Evening News piece by championing how “every once in a while, a moment of truth breaks through a political campaign event. That happened last night when a 60-year-old retired steel worker from Union Township, Indiana, asked a question.” Viewers then saw a clip of Steve Skvara from the AFL-CIO debate shown Tuesday night on MSNBC: “Every day of my life, I sit at the kitchen table across from the woman who devoted 36 years of her life to my family, and I can't afford to pay for her health care. What's wrong with America? And what will you do to change it?” Miller explained that “Skvara says he got the answer he was looking for from his favorite candidate, John Edwards,” who proclaimed: “And we ought to have universal health care in this country!” Skvara agreed: “We need a national health care plan.” Miller wondered: “Now the question is whether a moment in a debate will be the moment that motivates reform.”

Earlier Wednesday, on MSNBC's Hardball, Chris Matthews featured a segment with Skvara and hailed him as “a great American who speaks so well to the needs of this country.”

Skvara complained that when the steel company he had worked for went bankrupt he lost his promised lifetime health insurance. Not surprisingly, neither Miller nor Matthews raised Skvara's lack of personal responsibility in planning ahead for his own future when he worked in a declining industry, burdened by high health care costs, that many predicted long ago would go out of business. Nor did they look into the responsibility of the union to which he paid dues for decades. On Hardball, Skvara did acknowledge that he's on Medicare and his wife, who is several years younger, will qualify for Medicare in a few years.

Exactly one week ago, Couric and CBS promoted “landmark” and “historic” efforts to expand federal control of health, as recounted in my August 1 NewsBusters item:

Wednesday's CBS Evening News trumpeted two liberal efforts to expand government power, leading by heralding “landmark legislation” to have the FDA regulate cigarettes followed by a story slanted in favor of, as reporter Thalia Assuras described it, an “historic expansion of health care coverage for children” of the “working poor.” Assuras, however, ignored such inconvenient facts as how a family of four with an income as high as $82,600 could get on the taxpayers' dole. Katie Couric had teased her top story: “Tonight, landmark legislation that supporters say could save millions of lives. Congress takes a step toward regulating everything about cigarettes for the first time ever.”

Next, Couric introduced a look at “getting medical coverage for the millions of American children who don't have it.” Assuras touted how a proposed expansion of the State Children's Health Insurance Program (SCHIP) “boosts funding by $50 billion over five years, almost doubling the number of uninsured kids covered from the current six million children to about 11 million.” Sinking to the all too common media technique of exploiting a victim to push a liberal policy, Assuras cited “children like seven-year-old Pilar Edwards whose ear ache was so severe her mother brought her to this mobile medical clinic where she could get help even though Pilar is uninsured.” Assuras did pass along how critics contend “the legislation is a slippery slope toward a universal health care plan,” but against two negative soundbites, viewers heard from four advocates as Assuras concluded with a Senator's charge that “it would be a travesty if the President vetoed this legislation,” followed by these final words from Assuras: “With kids caught in the middle.” More like taxpayers.

An excerpt from a July 18 posting by Julia Seymour on the MRC's Business and Media Institute site, “Health Care Lie: '47 Million Uninsured Americans.'”

....[M]edia outlets incorrectly claimed the number of uninsured to be 40 to 50 million Americans. The actual total is open to debate. But there are millions of people who should be excluded from that tally, including: those who aren’t American citizens, people who can afford their own insurance, and people who already qualify for government coverage but haven’t signed up.

Government statistics also show 45 percent of those without insurance will have insurance again within four months after job transitions.

Accounting for all those factors, one prominent study places the total for the long-term uninsured as low as 8.2 million -- a very different reality than the media and national health care advocates claim.

The number of the uninsured who aren’t citizens is nearly 10 million on its own, invalidating all the claims of 40+ million “Americans” without health insurance....

However, the Census Bureau report “Income, Poverty, and Health Insurance Coverage in the United States: 2005,” puts the initial number of uninsured people living in the country at 46.577 million.

A closer look at that report reveals the Census data include 9.487 million people who are “not a citizen.” Subtracting the 10 million non-Americans, the number of uninsured Americans falls to roughly 37 million....

Many of the same people pushing the incorrect numbers of uninsured Americans also claim that these people cannot “afford” insurance....

Katie Couric echoed those sentiment on the CBS “Evening News” May 23.

“The number of Americans with no health insurance is continuing to grow as more and more employers say they can’t afford to offer group insurance…People who try to buy insurance on their own often find the price beyond their reach,” said Couric as she introduced a two-part “investigation of the health insurance industry.”

But according to the same Census report, there are 8.3 million uninsured people who make between $50,000 and $74,999 per year and 8.74 million who make more than $75,000 a year. That’s roughly 17 million people who ought to be able to “afford” health insurance because they make substantially more than the median household income of $46,326....

Subtracting non-citizens and those who can afford their own insurance but choose not to purchase it, about 20 million people are left – less than 7 percent of the population.

“Many Americans are uninsured by choice,” wrote Dr. David Gratzer in his book “The Cure: How Capitalism Can Save American Health Care.” Gratzer cited a study of the “nonpoor uninsured” from the California Healthcare Foundation.

“Why the lack of insurance [among people who own homes and computers]? One clue is that 60 percent reported being in excellent health or very good health,” explained Gratzer....

So what is the true extent of the uninsured “crisis?” The Kaiser Family Foundation, a liberal non-profit frequently quoted by the media, puts the number of uninsured Americans who do not qualify for current government programs and make less than $50,000 a year between 13.9 million and 8.2 million. That is a much smaller figure than the media report.

Kaiser’s 8.2 million figure for the chronically uninsured only includes those uninsured for two years or more. It is also worth noting, that, 45 percent of uninsured people will be uninsured for less than four months according to the Congressional Budget Office.

The MRC's Brad Wilmouth corrected the closed-captioning against the video to provide a transcript of the August 8 CBS Evening News story: 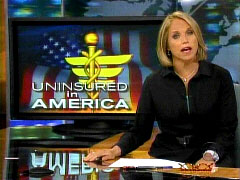 KATIE COURIC: It's well-known that far too many Americans have no health insurance, but what you might not know is that young adults make up nearly a third of the uninsured. According to a report today by the Commonwealth Fund, 45 million Americans have no coverage. That includes more than 13 million between the ages of 19 and 29. Many of them don't get coverage from their jobs, and cannot afford to buy it on their own. That, of course, is true for many Americans, regardless of age. Michelle Miller reports there was a dramatic reminder of that and a plea for help at last night's Democratic presidential forum in Chicago.

MICHELLE MILLER: Every once in a while, a moment of truth breaks through a political campaign event. That happened last night when a 60-year-old retired steel worker from Union Township, Indiana, asked a question. 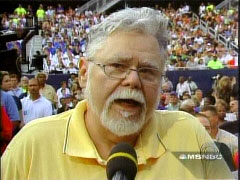 STEVE SKVARA at the debate: Every day of my life, I sit at the kitchen table across from the woman who devoted 36 years of her life to my family, and I can't afford to pay for her health care. What's wrong with America? And what will you do to change it?

SKVARA: At the time when I worked there, it was s given that you had insurance benefits for the rest of your life when you retired, you know.

MILLER: But then the company went bankrupt. His financial future crumbled. He lost part of his pension and all of his health insurance. Today, both he and his wife Sandy, too shy to appear on camera, suffer lingering injuries from a car accident a decade ago. Steve has a heart condition, and they can just barely afford health insurance for him. Sandy has none. And that's what prompted his shaking rage at the debate.

SKVARA: It's not just about a retiree and his wife. It's about everybody in the country.

MILLER: There are now nearly 45 million Americans without health insurance.

STUART ROTHENBERG, political analyst: I think you're going to see everybody talking about health care. The question is, is that how people, and why people, make a decision in 2008? It's too early to know. 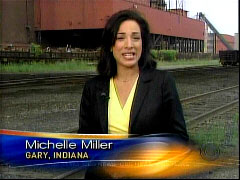 MILLER: According to a recent CBS News/New York Times poll, after the war in Iraq, health care is the number one concern for Americans. Steve Skvara says he got the answer he was looking for from his favorite candidate, John Edwards.

JOHN EDWARDS, at the debate: And we ought to have universal health care in this country-

SKVARA: It was answered directly: We need a national health care plan. And we do. This country does.

MILLER: Now the question is whether a moment in a debate will be the moment that motivates reform. Michelle Miller, CBS News, Gary, Indiana.