In Giuliani Story, Williams Declares 'Most Believe a Woman Has a Right to an Abortion' 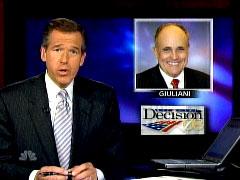 Television anchors must compress complicated subjects into simple sentences, but on Friday night NBC's Brian Williams delivered too simple of a presumption when he set up a story, on Rudy Giuliani's latest attempt to explain his abortion position, by trying to paint Republicans as out of the mainstream as he asserted that “most Americans believe a woman has a right to an abortion. Most Republicans do not.” While it's true that most don't want abortion completely banned under all circumstances, the majority favor restrictions on such a “right” and only 16 percent, according to a February Washington Post poll, want it “legal in all cases.” And interestingly, the latest abortion poll on the PollingReport.com's abortion page, a May 4-6 survey by CNN/Opinion Research Corporation, discovered that 50 percent identified themselves as “pro-life” compared to a minority of 45 percent who called themselves “pro-choice.” NBC's own late April poll found that, by a fairly solid 53 to 34 percent, most agreed with the Supreme Court's decision upholding the federal law banning “partial-birth” abortions.

Brian Williams set up the May 11 NBC Nightly News story from David Gregory:

“Now to the big political story of the week, having to do with the leading GOP candidate for the President's job. Most Americans believe a woman has a right to an abortion. Most Republicans do not. Rudy Giuliani is running as a Republican with a pro-abortion rights record which he tried to explain again today.”

The May 4-6 CNN/Opinion Research Corporation poll (PDF of its results) asked: “With respect to the abortion issue, would you consider yourself to be pro-choice or pro-life” 50 percent responded “pro-life” and 45 percent answered “pro-choice.”

An April 20-23 NBC/News Wall Street Journal poll asked: “As you may know, the Supreme Court recently upheld a law that makes the procedure commonly known as a partial birth abortion illegal. Do you favor or oppose this ruling by the Supreme Court?” Favor: 53 percent; oppose: 34 percent.
Abortion 2008 Presidential NBC Nightly News