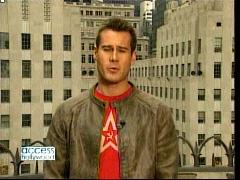 Tim Vincent, the Britain-born New York correspondent for Access Hollywood, sported a hammer and sickle T-shirt on Friday's show as he stood in front of NBC's Rockefeller Plaza complex and introduced a piece on American Dreamz, the movie takeoff of American Idol. Though he wore a jacket over the red shirt with the symbol of the regime which murdered tens of millions and oppressed hundreds of millions more for decades, a gold hammer and sickle was clearly visible inside a red star. The gold-outlined red star, sans the hammer and sickle, matches the Soviet's Red Army emblem. I don't get it. Is this some kind of cool statement with thirtysomethings, elite New Yorkers or Brits? Or is it just part of some promotion for an upcoming movie? Imagine the proper outrage that would explode if he had worn a Nazi swastika. I put "hammer and sickle t-shirt" into the Copernic search engine and though I did not find the exact shirt adorned by Vincent, I was shocked to find a

couple of dozen sites which sell hammer and sickle T-shirts -- and mugs too.

Vincent, a veteran of the BBC as detailed in his posted bio, is also a contributor of celebrity news for NBC's Today show. Access Hollywood is produced by NBC at its Burbank facility and is carried in the early evening by all the NBC-owned stations -- and by affiliates of NBC and other networks in other cities.

Viewers of the April 14 Access Hollywood saw Tim Vincent for 15 seconds with his communist T-shirt as he introduced this story: "With some 30 million people tuning in every week for American Idol, it was only a matter of time before the big screen cashed in. So get ready for American Dreamz, complete with a British gent that everybody loves to hate. Why do they always pick on the Brits?"

Access Hollywood then went to the story narrated by Vincent which included some on-camera time for him, wearing a black shirt, as he interviewed Hugh Grant, who plays the Simon Cowell character.
NBC Entertainment Media Video