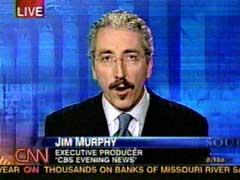 Declaring that the Media Research Center “is a much more biased organization than any institution in the MSM," CBS Evening News Executive Producer Jim Murphy, on the CBS News “Public Eye” blog on Thursday, criticized two MRC CyberAlert articles I wrote which were first posted this week on NewsBusters. Public Eye Editor Vaughn Ververs asked Murphy to comment on a September 20 NewsBusters item, “CBS: Bush Should 'Wake Up and Smell the Coffee.'” Murphy seemed befuddled by the article: “Please explain to me what's WRONG with pointing out the President spoke from an air-conditioned tent, which to most people on the gulf would be a more than welcome relief from their existence. It was not gratuitous, it was an interesting note” and the CBS reporter's “use of the well-known phrase, 'wake up and smell the coffee,' was attributed to the restaurant owners as THEIR feeling, NOT hers. It's just good, colorful, pointed writing.” (The MRC's Michelle Humphrey tracked down a still shot of Murphy from a May of 2004 appearance on CNN.)

Murphy was similarly flummoxed by the September 21 NewsBusters article, “CBS Trumpets Carter's Criticism of Bush Administration,” contending that “we simply reported it because the former President SAID it.”

But Murphy's reasoning is a tautology. I was criticizing the judgment of CBS News on what is news. Other outlets did not choose to highlight Bush's air-conditioned surroundings, how one woman at a French Quarter restaurant assailed him for not experiencing their suffering or what Jimmy Carter said. Carter makes comments nearly every day. CBS chose to report this particular comment on this day. CBS decided that the restaurant owner's comment was more newsworthy than any number of other soundbites they could have run. The story reflected an agenda. By Murphy's reasoning, my articles should be beyond criticism since they accurately quoted what CBS reported.

Public Eye Editor Ververs conceded the NewsBusters/MRC piece on Bush had a point about CBS's "attitude." That and a bit more from Murphy follows.

Reacting to Murphy's take on the Bush story, Ververs described the MRC as “a centerpiece in what has become an entire industry of partisan media criticism,” but he soon pointed out how “that's not to say there isn't occasionally some validity to their gripes. In this case, they have a small, but overblown, point to make in my view (which, of course, is also subjective). Television is about more than words, it's about images of course but also tone, attitude and emotion.”

On featuring Carter in the September 21 CBS Evening News story, Murphy asserted: "I'd like to say one more thing about MRC. Look at its website today. It has one headline saying 'CBS Promotes Carter's FEMA Criticism.' Another says 'CBS Lauds Carter's Criticism of Bush Administration.' CBS News didn't LAUD or PROMOTE anything Jimmy Carter said. We simply reported it because the former President SAID it. That's what we DO -- report to viewers what is happening on a given day and what people are saying on a given day. The MRC chooses to like or dislike what is REPORTED based on how it FEELS. That is simply, purely, BIAS."

Those headlines did go beyond the headlines I wrote to go above the NewsBusters and CyberAlert postings (as well as what CyberAlert e-mail subscribers saw), but focusing on them is like me judging a CBS Evening News story based on a teaser or plug line for an upcoming story.