On Thursday's New Day, CNN host Alisyn Camerota provided New York Democratic Governor Andrew Cuomo (brother of her co-host Chris Cuomo) an unchallenged forum to complain about the Republican tax cut plan and how he expected it to affect taxpayers in his state and other blue states like California and New Jersey where residents pay high state taxes.

The Democratic governor strangely sounded like someone who doesn't just pay someone to calculate his income taxes, but who has never even bothered to look and learn the basics of how income taxes are calculated as he claimed that it would be the first time in history that some Americans would be taxed on their income twice because of the new cap on how high a tax deduction taxpayers can take to reduce their federal tax bill.

In fact, when a person pays both state and federal income tax, that person is being taxed twice on much of that income, although deductibility makes it possible to have a portion of income that is only taxed once. Additionally, some would also argue that the estate tax is double taxation, or that stock dividends are suffer double taxation.

The Democratic governor also repeatedly stumbled over a point he was trying to argue that, because there are no Republican U.S. Senators from blue states like New York, New Jersey and California, Republicans were not concerned about hurting taxpayers in those states. But, instead, what he stated twice is that there are "no Senators" from those states, and another time that there are no "Democratic Senators" from those states even though all six U.S. Senators from the three states are Democrats.

The closest Camerota came to challenging any of his criticisms was when he oddly claimed that the Republican tax plan might be "illegal or unconstitutional" as she followed up to simply ask him what he meant.

Below is a transcript of relevant portions of the Thursday, December 28, New Day on CNN:

ALISYN CAMEROTA: Let's talk about this tax confusion with New York Democratic Governor Andrew Cuomo. He signed an executive order last week allowing residents in his state to prepay their property taxes before the end of the year. Good morning, Governor.

GOVERNOR ANDREW CUOMO (D-NY): Good morning, great to be with you, Alison.

CAMEROTA: Great to have you. Why are you allowing New Yorkers to pay their 2018 tax bill early? 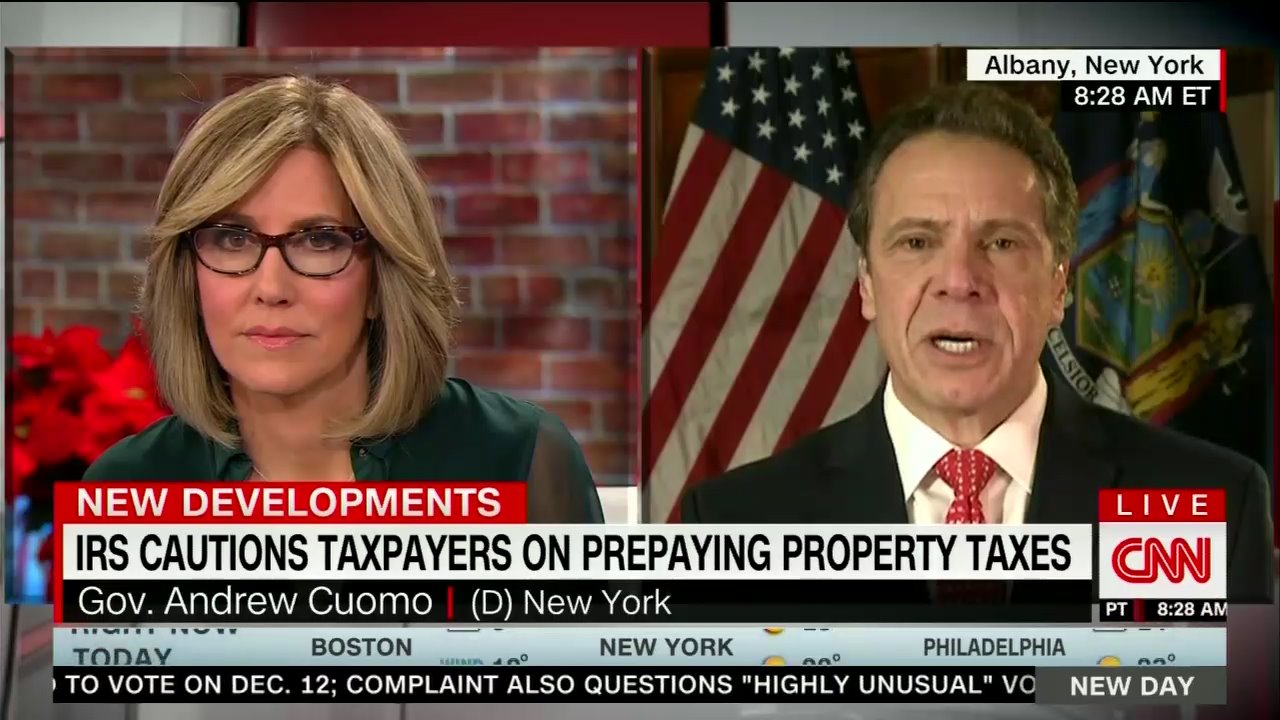 GOVERNOR CUOMO: Well, look, as you said in the previous piece, this bill was rushed through in the Senate. It is a bait and switch. They sold it as, "We're going to help the middle class," and wound up being a benefit for the rich and rich corporations. They hope the rich corporations will then give to the employees as a matter of their largesse. But if they actually wanted to raise wages for workers, they would have said in the bill, "The corporation's going to get a tax cut, but they must give it to the workers. So it was all a bait and switch. It's all a marketing ploy.

One of the really devilish things in the bill is they then eliminate the deductibility of state and local taxes, which sounds like a mouthful, but what it says is, up until now, over 100 years, you paid a state tax, you paid a local tax, you deducted that from your federal tax. They're eliminating that, so you are now paying two taxes. You pay a tax to the state or a tax to the local government, and then the federal government taxes that tax.

GOVERNOR CUOMO: And it happens to occur coincidentally on only blue states.

CAMEROTA: And that's what I want to ask you about because, Governor, you've called this an economic civil war -- I know that's what you're touching on. So what are you trying to say?

GOVERNOR CUOMO: They -- the Senate has no Senators from Democratic states -- blue states. This tax provision hits the blue states by eliminating the state and local tax deductibility, and uses that money to finance the tax cut in the red states. This is the most partisan, divisive legislation we've seen

CAMEROTA: So it's payback, you think, for the blue states not voting for the President?

GOVERNOR CUOMO: There's always politics in the crafting of legislation, but this was an egregious, obnoxious -- what the Senate was saying is, "Because we have no Senators from the blue states, we don't care, so let's pillage the blue to give to the red." That's never been done in this nation before. That's partisan politicking over any semblance of good government.

CAMEROTA; So how does New York fight back? What do you plan to do about this?

GOVERNOR CUOMO: Well, they are challenging the structure of our tax code. We're going to propose a restructuring of our tax code. I'm not even sure what they did is legal and constitutional, and that's something we're looking at now.

CAMEROTA: What does that mean? Why wouldn't it be legal to change the tax code?

GOVERNOR CUOMO: You can change the tax code -- you can't penalize my state because of our political affiliation, There's never been a double taxation before in the history of the nation. So there are legitimate grounds. Now, if they own the courts, it might be harder. Now, ultimately, Alisyn, look, there's democracy and people know what happens.

You look at your pieces. You have thousands -- you have thousands of people lining up on a holiday weekend to prepay their taxes. Do you think they're going to forget? Do you think they don't understand what has happened here? They know exactly what has happened, and they're going to remember because you're hurting them right in their pocket book, and democracy ultimately works.

And maybe it worked for the Senate because they don't have any Democrats -- Democratic (sic) Senators in these states -- which is the epitome of political arrogance. But there are Republican congressmen -- there's a Republican President who has to run in these states, and these people are not going to forget it.