On Saturday's AM Joy, Joy Reid hosted over a panel of five MSNBC Republicans to discuss the week's political news. True to form, allegedly right-leaning Washington Post columnist Jennifer Rubin was trashing conservatives as she derided Virginia GOP gubernatorial nominee Ed Gillespie's campaign as  "disgraceful" and complained that the "conservative media" are "spreading nonsense to the American people" on Hillary Clinton and Russian uranium interests.

Reid introduced the first segment of the program shortly after 10:00 a.m. which included Republican strategists Katon Dawson, Evan Siegfried, and Chris Metzler; along with MSNBC contributor Rick Tyler and the Washington Post's Rubin.

Dawson -- who is one of the few recurring MSNBC Republican guests who is a fairly typical conservative Republican -- began by suggesting that Republican Senate candidates may defy midterm election history and be successful in the 2018 midterms.

Siegfried then took his turn and talked up the notion that young people are leaving the Republican party because "they see us as the crusty old intolerant white guy." Siegfried began:

If you actually look at what's happening, we're talking about the base of the Republican party -- it's actually been shrinking. We've been contracting as a party. Between December 2015 and March 2017, we lost 23 percent of Republicans aged 18 to 29. They left the party. That's almost one in four.

And that goes hand in hand with the demographic crisis. Republicans aren't connecting with millennials. The largest generation in the country and the biggest voting block -- they see us as the crusty old intolerant white guy. And while there are people in the party who are trying to work over and fix that caricature, Donald Trump is doing the exact opposite and proving the caricature true.

No one addressed the recurring tendency for younger voters to become more conservative as they grow older.

A bit later, when Rubin got to weigh in on the issue of the Clintons and Russia, she complained about the "conservative media" coverage of the issue: 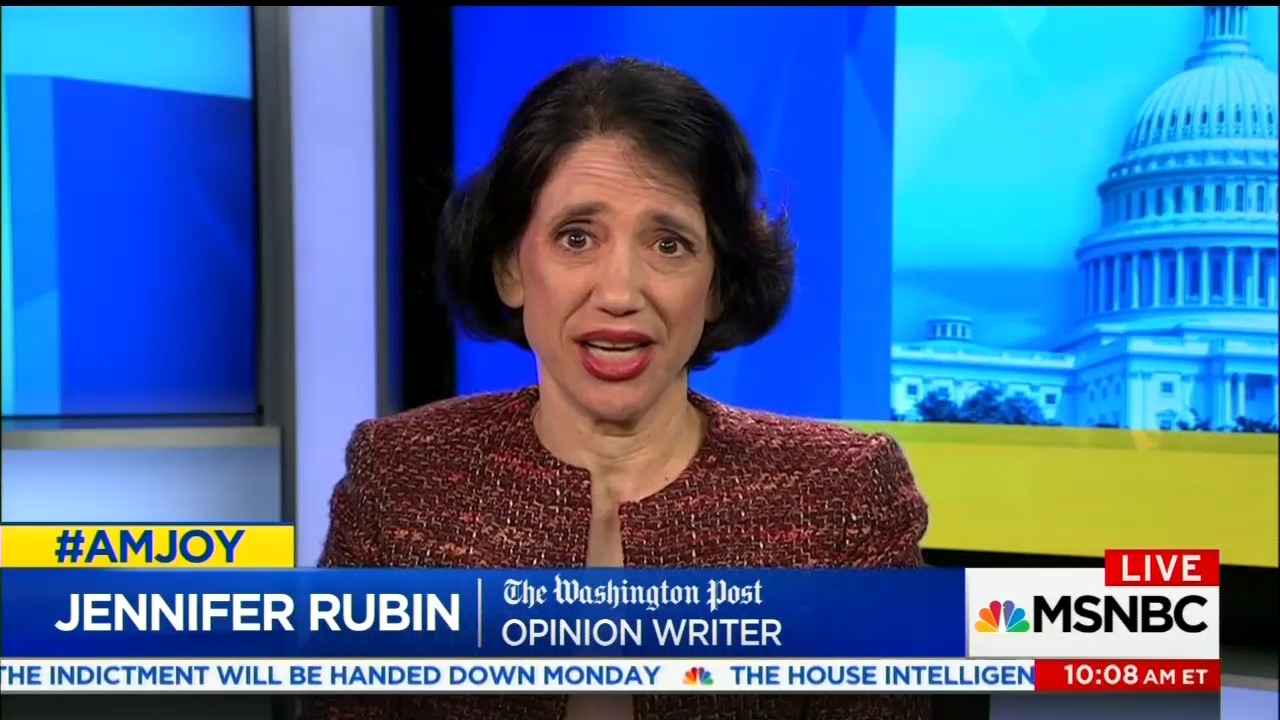 You'd think we're in the ninth month of the Clinton administration for all the coverage she's getting. Aside from the fact that none of this matters because she's nowhere near the White House, obviously this is a technique to distract and rile up the base.

And we've actually seen the conservative media go along with this unhealthy relationship between some outlets and Donald Trump and really spreading nonsense to the American people. I do think that we're in for another beating in terms of his popularity and his presidency next week because we are anticipating obviously another -- or one at least indictment

A bit later, as the panel members gave their views on whether Gillespie would win the election in Virginia, Rubin was the most negative against the Republican candidate as she predicted that the Democratic nominee would win:

Northam -- and one of the reasons is that Ed Gillespie has tried to turn himself inside out to be a Trumpite, and people who used to like Ed Gillespie like me don't like him anymore. And the people who really love Trump probably don't think he's very authentic. He's done a 180 from his last election which was very close. He almost won the U.S. Senate. He has had really a disgraceful election and a disgraceful campaign. Many people very disappointed in him.