Appearing as a guest on Monday's Tucker Carlson Tonight on FNC, frequent MSNBC guest and liberal Republican Richard Painter had a great deal of trouble explaining how more gun control might have stopped the Las Vegas mass shooting or other mass shootings as host Carlson challenged him on the subject.

Painter -- who has a history of excoriating the NRA -- has recently been using his Twitter account to attack the pro-gun group and Republicans it supports, referring to NRA campaign spending as "blood money."

On Monday's show, after the University of Minnesota law professor and former Bush administration member argued that the police should have been notified that Last Vegas gunman Stephen Paddock had bought so many guns, but declined to specify the exact number he thought should trigger police scrutiny, host Carlson followed up, referring to Painter's Twitter rants:

But your claim -- explicit claim -- that this could have been solved by laws -- you said that repeatedly and suggested that anyone who didn't agree with you had, quote, "blood money" in their pockets, which is a heavy thing to say. So, again, what specific law are you calling for?

After Carlson jumped in to push for him to discuss his proposed solution, his guest continued:

They can use that information along with other information to check out the facts, and they do not need a law to go pay you a visit in your house and say, "Hello, what's up? What's going on?" Is he a gun collector? Is he a dealer? There might be a good reason to go purchasing dozens of weapons over a short period of time -- there might be a bad reason. It turned out this guy had a very bad reason --

So you think if people buy too many guns, the police should come and visit them and ask them why they have the guns? And then do what?

After Painter responded that it "depends on the circumstances," the FNC host followed up: 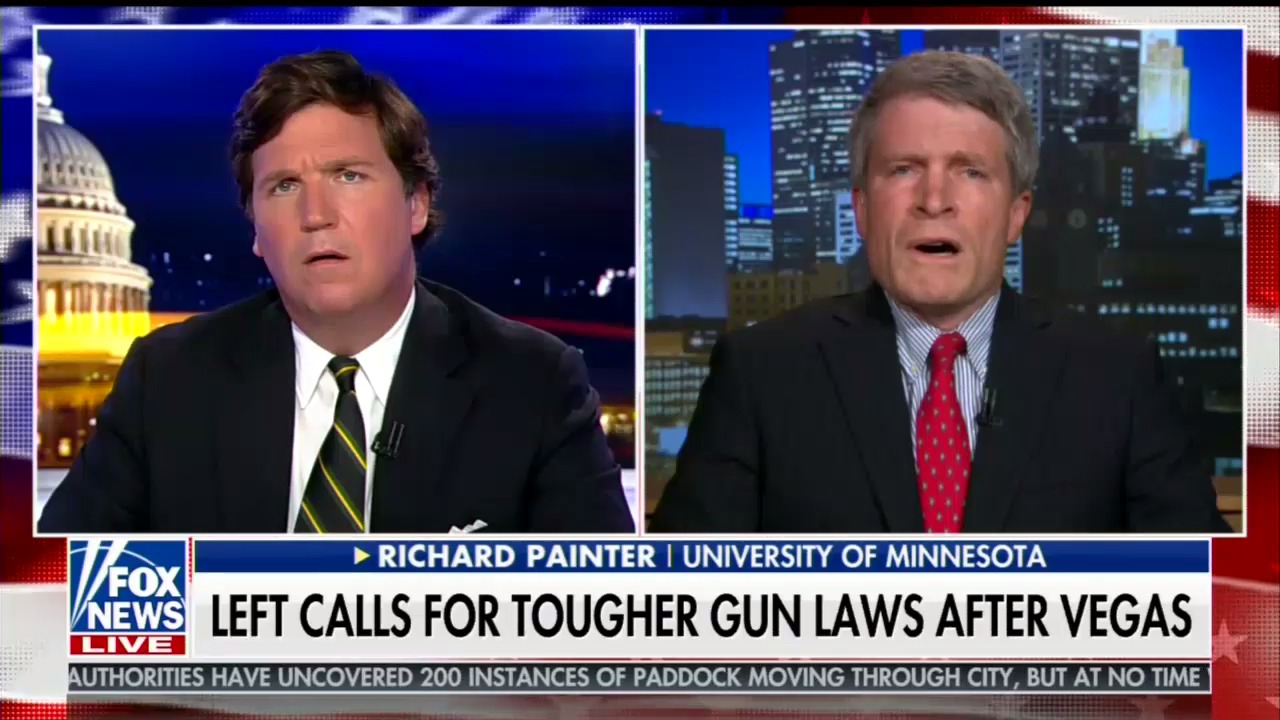 Well, what about in this case? The specific circumstance you're tweeting about, what should the police have done in this case? Let's say the law was on the books that you buy more than 20 guns in six months, police come to your house and then they ask what?

Well, as I say, they could have paid him a visit and say, "Why do you have the guns? Why are you buying all these guns? What's going on?" And they might have figured out that this guy was a lunatic or that shot up the gay bar...

As previously noted by NewsBusters -- not including Las Vegas which is still under investigation -- gunmen who have taken part in the most deadly mass shootings from the past 20 years -- including the gay bar shooting in Orlando which Painter mentioned-- usually only used two guns in the commission of their rampages. The Aurora, Colorado, theater gunman utilized three guns, but most of the bullets were reportedly fired from one gun.

So a mass shooter would not even need to purchase enough guns to set off any flags with law enforcement even if such a law existed.

His liberal Republican guest was still unable to make a case that such a law would actually have prevented any of the relevant mass shootings:

No, you cannot, but the police know -- the authorities know how many cars you have in your garage -- they know all sorts of facts about you. Shouldn't they know if you have dozens of these guns?

Over the past week, on his Twitter account, Painter has vilified the NRA as "the most deadly lobby in the U.S.," calling them "nuts," and has referred to campaign spending by the NRA as "blood money."

He also retweeted a Washington Post article which tried to shame Republicans by displaying the amount of money the NRA has spent on each member of Congress.

Painter also tweeted out an op-ed he wrote after the Sandy Hook shootings in December 2012 in which the liberal Republican called the NRA a "racket" and complained about their efforts to support concealed carry.

But the last election showed the costs to Republicans of succumbing to the NRA and to other groups with extremist views on issues like homosexuality and stem cell research. The fringe groups, drenched with money and the 'free speech' that comes with it, stood firm, and become even more radical, as the population as a whole -- including many traditional Republican voters -- has moved in the opposite direction.

The liberal Republican also ludicrously called on Republican leaders to refuse to support Republican candidates who are supported by the NRA:

Republican politicians must free themselves from the NRA protection racket and others like it. For starters, the party establishment should refuse to endorse anyone who runs in a primary with NRA money against a sitting Republican. If the establishment refuses to support Republicans using other Republicans for target practice, the NRA will take its shooting game somewhere else.

It did not seem to occur to him that Republican leaders who would turn on the NRA might be voted out since the NRA is popular among voters who elect Republicans.

Below are some of Painter's tweets from the past week from October 1 to October 9 :

October 5:
demanded that the President refuse to sign any other bills until a "comprehensive gun law" is passed
https://twitter.com/RWPUSA/status/915947103775547395

October 2:
Americans are sick of political hacks talking about condolences and sympathy while stuffing NRA blood money in their pockets.
https://twitter.com/RWPUSA/status/914847997053333504

October 1:
If Bannonite nationalists take over the GOP, none of us wants the enabler role of a Paul von Hindenburg. We're out.