You read it here first. Two months ago -- and again last night -- NewsBusters pointed out that there was a major hole in the dominant media theory that GA-06 was a "solidly Republican" district that Republicans should be embarrassed about having to defend in yesterday's special election.

In spite of Donald Trump just barely winning the district last November, many journalists and commentators touted former Republican Rep. Tom Price's landslide reelection from the same Election Day as evidence the district was still solidly Republican and that its coolness toward Trump was just an anomalous diversion from normalcy.

But it turned out that former Rep. Price did not face a serious candidate last November as his official Democratic opponent named on the ballot raised no money, did not campaign, and could not be found when local reporters tried to interview him.

But as recently as last night, MSNBC anchors like Rachel Maddow, Lawrence O'Donnell, Chris Hayes and Greta Van Susteren were all still touting Price's landslide.victory. MSNBC "conservative" Steve Schmidt even joined in with the kind of analysis a liberal would approve of as he appeared with O'Donnell and called the result an "ominous win" for Republicans.

But this morning, MSNBC analyst Steve Kornacki burst that bubble as he appeared on Morning Joe and again later on MSNBC Live with Stephanie Ruhle, and informed viewers that Price essentially had no Democratic opponent running against him last year, and that Trump's narrow margin of victory was the more significant number from last November's Election Day.

On Morning Joe, MSNBC's Willie Geist brought up Democratic attempts to spin Jon Ossoff's loss as he posed: "The spin this morning from Democrats, which is that, 'Yes, we lost, but we made up 16 points from November where Tom Price won by 23 points.'"

Kornacki jumped in to exclaim, "No, stop, ohhh!" 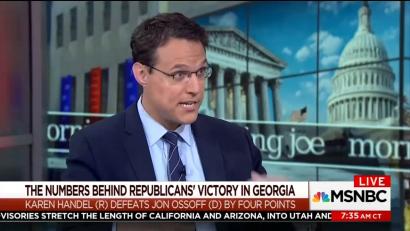 Geist added: "I know that's the spin, so what's the Steve Kornacki answer to that?"

The MSNBC analyst took apart the misinformation as he began:

I'm going to give you the total amount of money he raised for his campaign -- zero dollars. He spent -- he had no money in his campaign. Last fall, on the same day in the general election, Donald Trump carried this district by one point. That's why Democrats were so interested in this race. That's why you had tens of millions of dollars pouring in.

Kornacki seems to have only just learned of this angle since yesterday evening since he appeared on For the Record with Van Susteren and did not correct her when she made the same misleading claim about Price's landslide reelection, as he merely went along with the "solidly Republican" claim.