On Sunday afternoon, MSNBC Live gave a blatantly sympathetic forum to Animal Planet host Jeff Corwin to engage in hyperbolic bashing of the Trump administration's environmental policies. The liberal wildlife biologist recalled that his colleagues are 'terrified" before accusing Trump of "waging a war on wildlife," "robbing the bank," "decapitating and castrating" the EPA, engaging in "dark age denial of climate change" before giving the administration a grade of "F" for "frightening." He then derided EPA head Scott Pruitt as a "climate change denier," and likened him to a "fox in the hen house."

Host Alex Witt asked no contrarian questions, and gave endorsement to his activism as she concluded the segment: "I know you've reached out many times to the Trump administration trying to get word and speak with them. I hope that they hear you and give you a hearing, if you will, and let your thoughts be heard. That would be great there."

At 12:52 p.m. ET, the MSNBC host set up the segment and brought aboard her guest:

Earth Week is under way as activists ramp up various environmental causes leading up to Earth Day on Saturday. One of these causes is the dangerous impact that the construction of the proposed border wall will have on wildlife and habitat. Joining me now is Jeff Corwin, wildlife biologist and host of Ocean Mysteries, and a really good friend of this broadcast. It's always good to have you, Jeff. So I want you to get right into it and explain what scientists are predicting if this border wall gets built.

Corwin, who also appeared on MSNBC Friday to fearmonger over the proposed border wall with Mexico, predicted "environmental catastrophe" if the wall were built. Witt then sympathetically followed up:

Yeah, I know one of the most concerning ones is the Mexican Grey Wolf, but you've also talked about the jaguar, mountain lions, white-tailed deer among so many others. What are you hearing, Jeff, from all of your friends in the conservation community, especially those in government? Any word on where this is going and the concerns that they had with the administration?

The Animal Planet host packed a substantial amount of anti-Trump hyperbole into his response: 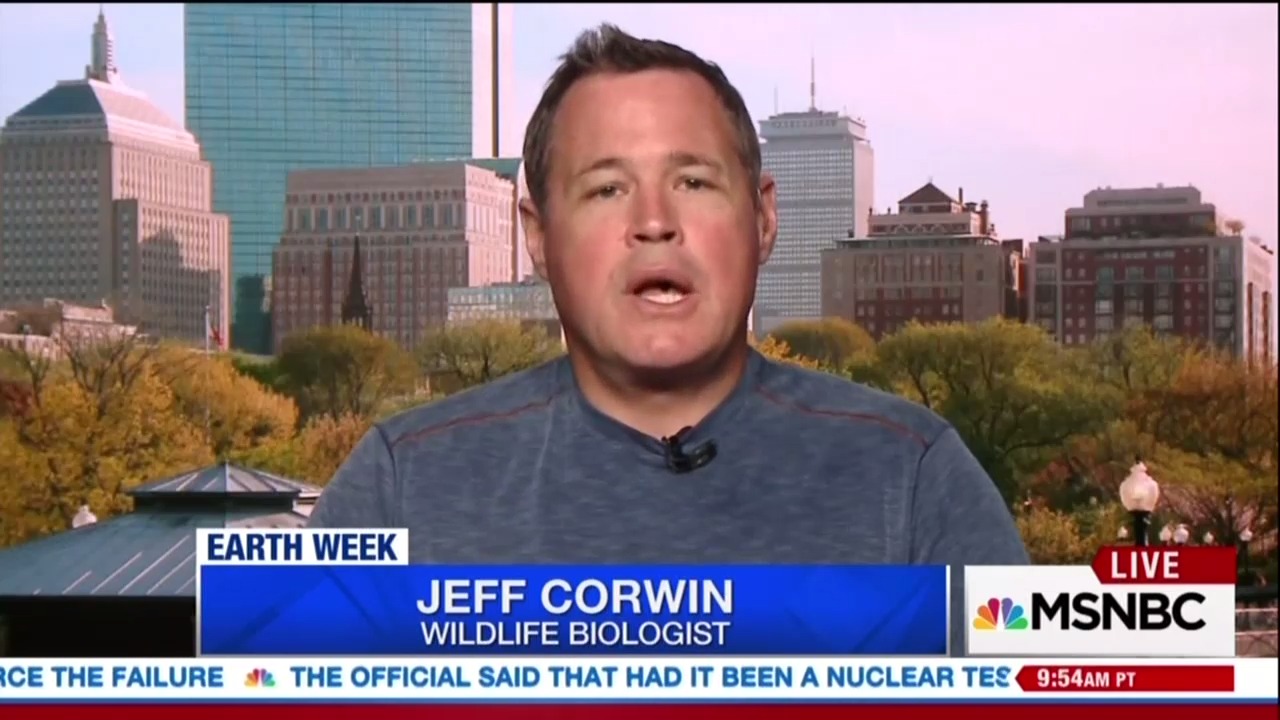 Well, a lot of folks, Alex, are terrified because the models and the tools that we use to manage wildlife in the United States -- to manage habitat and natural resources in a pragmatic and common sense way -- is based on science. And it doesn't seem like this administration cares about science -- for example, their dark age denial of climate change.

When you take their viewpoint on climate change, you mix it in the border wall, and you take how they're basically castrating and decapitating the governmental institutions like the EPA, the Department of the Interior, the National Oceanic Atmospheric Administration, the U.S. Fish and Wildlife Service -- you take these prime institutions and which they are decapitating and castrating.

It's a brilliant strategy to wage a war on wildlife, but this is the strategy that this administration has taken. They castrate because they remove the fuel and the resources to do the job, and they decapitate by deregulating the missions of these organizations. And it's the wildlife and ultimately our children that will pay the price because, Alex, the way I look at it, the resources that we use today, we don't inherit from our ancestors. We borrow from our children. And when it comes to nature and wildlife, the Trump administration is preparing to rob the bank.

The hyperbole continued as Corwin responded:

Well, right now, you know, when I'm looking at the Trump administration, Alex, you have Scott Pruitt, the head of the APA (sic), a climate change denier and a person that does not believe in conservation based on what I've seen. That's like having the fox in the hen house. You have all of these things under way, and I basically give this administration an "F" -- and that's an "F" for "frightening."

The MSNBC  host then ended on a very sympathetic note:

Okay, Jeff, I know you've reached out many times to the Trump administration trying to get word and speak with them. I hope that they hear you and give you a hearing, if you will, and let your thoughts be heard. That would be great there.