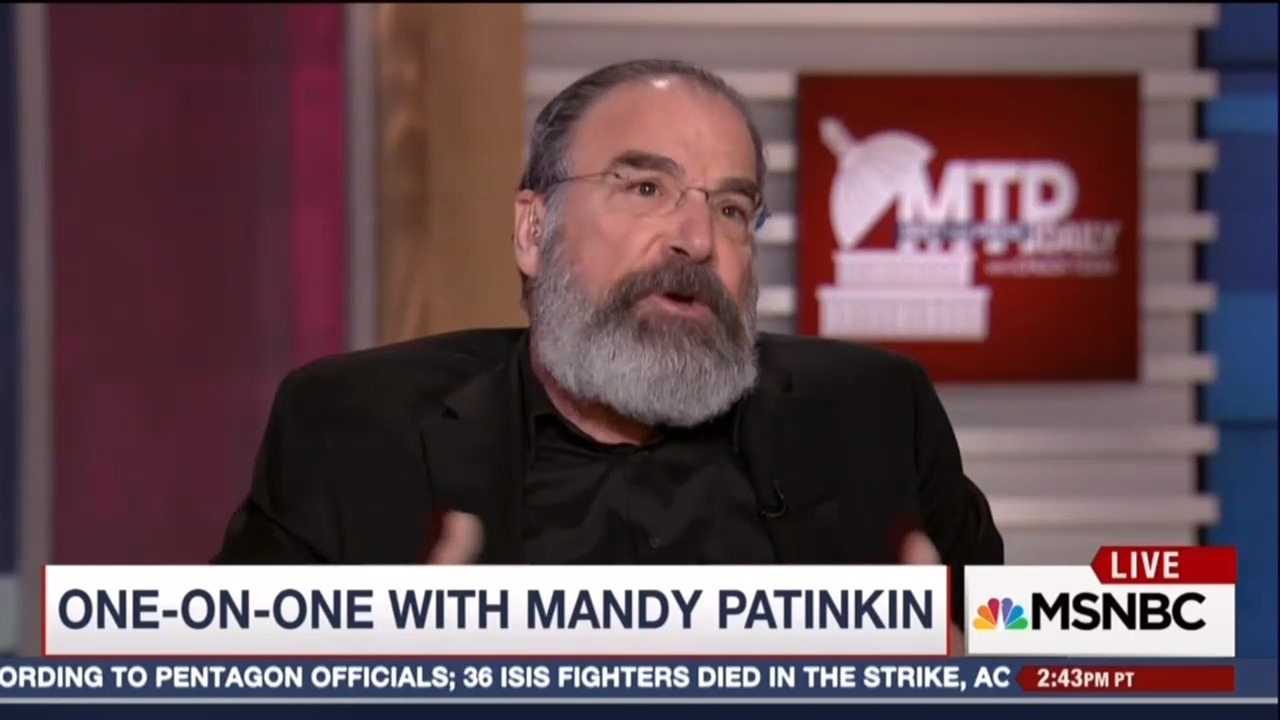 Appearing as a guest on Friday's MTP Daily on MSNBC, liberal actor Mandy Patinkin of Showtime's Homeland series bizarrely seemed to suggest that "white men" in both the government and the military are "the bad guys" in their dealings with Muslims.

His hyperbolic suggestion came as he recalled that the latest season of the show had turned towards a more sympathetic portrayal of Muslims in reaction to charges that the show had stoked anti-Muslim sentiments in previous seasons.

We have tried to be part of the cure, not part of the problem. A different story line where we're helping these people and a story line that shows in this case, in this year, in this season and -- that maybe it's the -- and it is white men in the government and the military establishment that are the bad guys, not the Muslim community.

Several minutes into the interview, after Patinkin spoke of his efforts to bring Syrian refugees into the country, host Chuck Todd brought up the issue of Americans being afraid some Muslim refugees might commit terrorism:

TODD: What role do you think you can play in helping to de-escalate the fear? Because there's -- it's fear that's out there, the idea that, 'Hey, you bring in pockets, and it just takes one infiltrator to ruin the entire program.'

Patinkin fretted that government leaders had a history of choosing people to "vilify," oddly including "Nazis" in his list of people who have been "vilified" in the past:

Yes. Well, this is where Homeland and the real world are one for me because I started to say earlier it's false information. It's not the truth in terms of how you get elected and the tools you use. It's the oldest trick in the book. I find someone to vilify. In movies, it was cowboys and Indians and the Nazis, Communists, you know.

After Todd recalled that "Homeland has been criticized for how Muslims are portrayed," Patinkin continued: "Yes, it is, and we have taken that responsibility, and, particularly in season six, we have tried to be part of the cure, not part of the problem."

Patinkin -- who made similar comments last week -- then brought up "white men" being "the bad guys" in some of the stories, but also suggested they were also villains in real life -- as he put emphasis on the word "is" -- in adding: "and that maybe it's the ---and it is white men in the government and the military establishment that are the bad guys, not the Muslim community."

Patinkin hinted at criticism of President Donald Trump and other politicians as he added:

He then went over the top again as he continued:

The gift I have to give to my fellow countrymen and people around the world, the facts are, the Muslim community are our gift. They are the fabric of what makes America great.

Patinkin ignored such terrorist attacks as those perpetrated recently by Somali refugees as he then argued:

And the vetting process is an 18-month to two-year process. You do not get in the door until the UNHCI in nine different countries feels that you as an individual or a family can make it through this very long, lengthy process, and the process never stops for the rest of your life. So refugees in the United States of America are the safest possible citizens you could say hello to or invite them into your community. And I encourage everyone to please invite them into their community.