On Monday's New Day on CNN, as liberal New York Times columnist Tom Friedman appeared as a guest and after CNN co-host Chris Cuomo brought up the White House statement for International Holocaust Remembrance Day that broke precedent and did not specifically mention "Jews" or "anti-Semitism," co-host Alisyn Camerota wondered if anti-Semitism at Breitbart News might be tied to the wording.

Camerota fretted: "I mean, and it's also scary because when you look back at Steve Bannon and some of the things that were peddled on Breitbart, Bill Kristol 'renegade Jew,' you could think that there's a method to this."

The CNN host's latest recollection of accusations of anti-Semitism by Breitbart News comes in spite of the conservative website's established history of calling out and exposing anti-Semitism and advocating for the Jewish state of Israel's protection.

A simple Google search would reveal that Breitbart.com has published well over 400 articles with the tag "antisemitism" or "anti-semitism" in the last 12 months, a large portion of which deal with highlighting problems of anti-Semitism in different parts of the world.

By contrast, outlets like CNN seldomly give attention to anti-Semitism in Europe, on American college campuses, or even the most virulent and blatant anti-Semitism in the Middle East which thwarts peaceful co-existence between Jews and Palestinian Arabs.

Ironically, liberal hero and Canadian Prime Minister Justin Trudeau similarly omitted any mention of Jews or anti-Semitism in his Holocaust remembrance statement a year ago. And a spokesperson for the Israeli Defense Forces even used similar wording in an initial Facebook posting before changing it.

As for the article Camerota cited, the use of the words "renegade Jew" in the title belies the fact that the writer of the article, Jewish conservative David Horowitz, was actually accusing conservative commentator Bill Kristol of supposedly abandoning, in the writer's view, what was best for Jewish security, and was certainly not criticizing him for being Jewish.

Below is a transcript of the relevant portion of the Monday, January 30, New Day on CNN:

CHRIS CUOMO: Look, this could be nothing, but it seems so odd. The administration puts out a Holocaust remembrance message -- it doesn't mention the Jews or who was killed in the Holocaust being the Jews, in the main. And Hope Hicks came out -- one of the press staff for the President -- came out with an explanation. 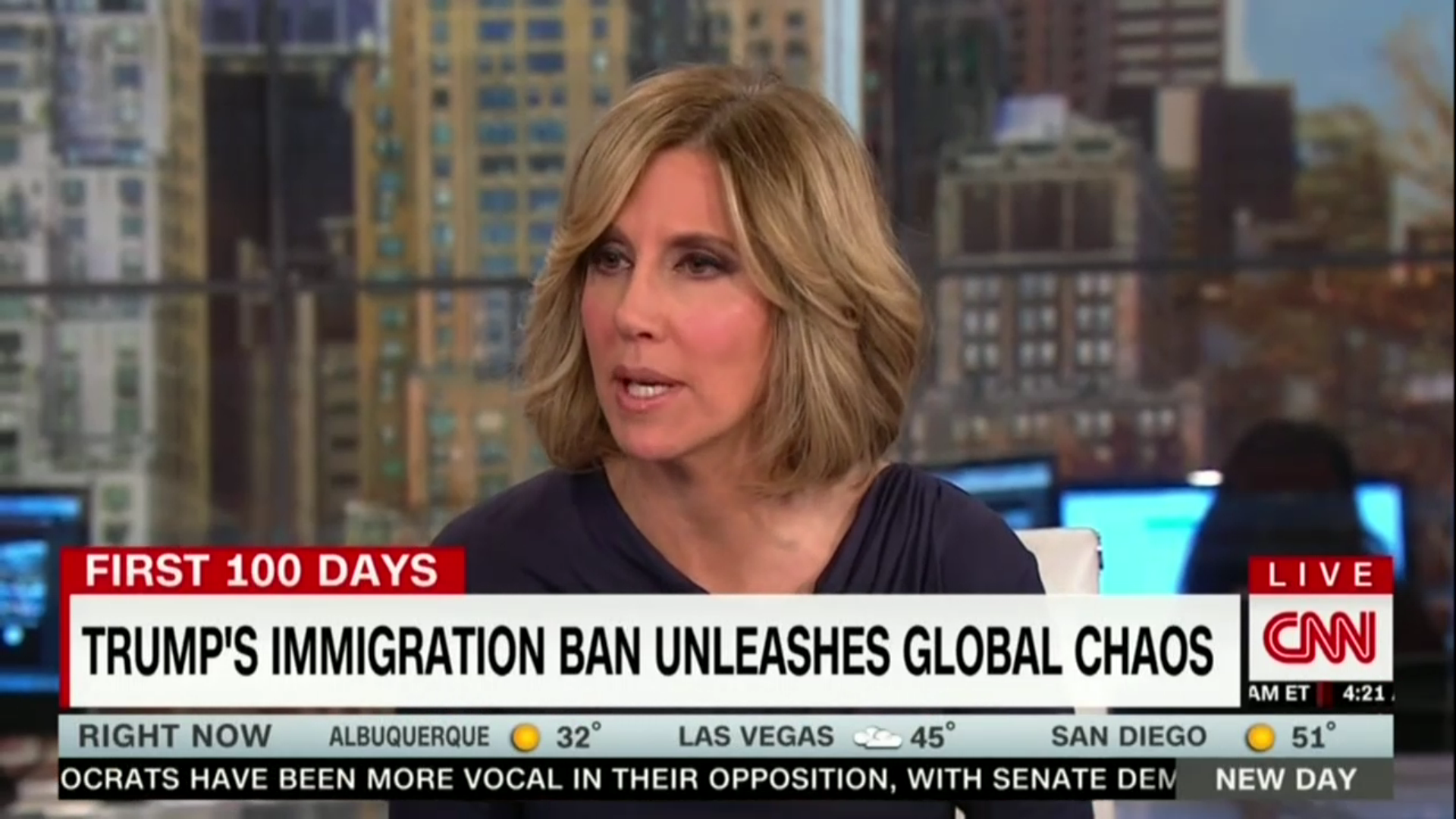 ALISYN CAMEROTA: Well, when it was pointed out to Hope Hicks -- one of the communications staff -- "Why didn't you mention any Jewish people being killed in this genocide?" -- she then directed -- I think it was Jake Tapper -- to a link online, the Huffington Post, that said, "Yes, six million Jews were killed, but also five million other people, including Gypsies and communists and anarchists and trade unionists."

CUOMO: Well, a lot of non-Jewish Germans as well. But I've never -- have you ever heard of a Holocaust remembrance message from the White House that didn't mention Jews being killed?

TOM FRIEDMAN: You know, Chris, it's obviously odd, and people have gone back and looked at how the Bush administration did it, how the Obama administration did it, and of course Jews were central to it because they were the central victims of this. And Hope Hicks' reaction is just wacky basically. You just never know with these people. Is there some weird thing playing out in there from Bannon and these hyper-American nationalists? Or is this just rookie errors that no one talks to anybody.

You know, they came to Washington with this kind of attitude of, "We've got it. We've got it. In fact, we really don't need to consult you very much." They've already lopped off the senior level of the State Department. Now, these are the people who actually run embassies, organize trips and whatnot. You just say, like, "Why would you do that?" These are not political people. These are just people who run the infrastructure, But there's this sense like, "We got it, everything you did was wrong, we have nothing to learn from you." And it's a little scary.

CAMEROTA: I mean, and it's also scary because when you look back at Steve Bannon and some of the things that were peddled on Breitbart, Bill Kristol "renegade Jew," you could think that there's a method to this.

FRIEDMAN: You certainly could. I don't want to accuse anyone of anything. You know, I actually covered the first year of Bill Clinton. It was Mr. Toad's Wild Ride, okay. Gays in the military -- we had Travel-gate. And so really I'm struggling to be fair and to say, like, you know-

FRIEDMAN: People make mistakes. They're getting their sea legs.