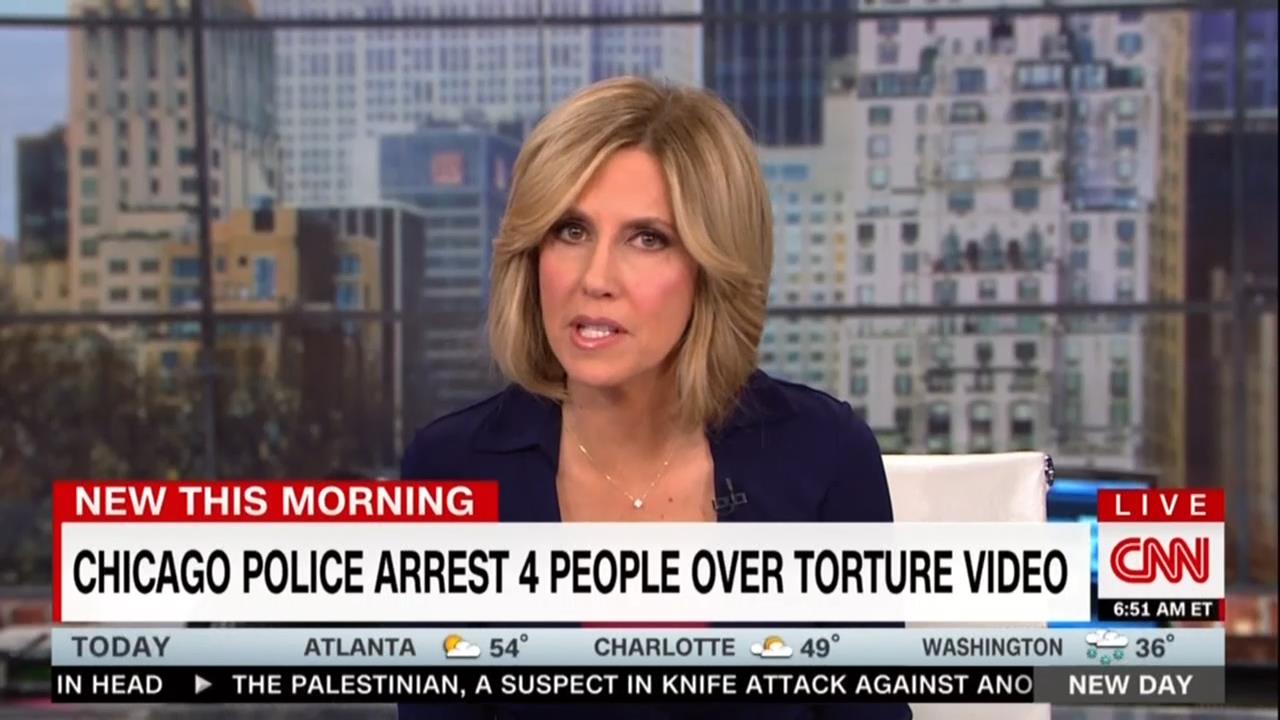 As Thursday's CNN New Day covered the horrendous story of a white special needs man being tortured by four black teens in Chicago while they made anti-white and anti-Donald Trump taunts and live streamed the assault on Facebook, CNN co-host Alisyn Camerota fretted that "right-wing websites" like Breitbart, The Blaze, and Townhall are going too far in making the story "political."

At 6:31 a.m. ET, after a full report on the horrific attack, Camerota plugged an upcoming segment on right-wing reaction to the video as she worried: "I mean, look, not only is this hideous, it's being also now somehow parlayed into a political statement. There are some right-wing websites that believe that this is political. So we're going to have a debate about what is behind this coming up."

At 6:51 a.m. ET, Camerota hosted a segment with liberal CNN political commentator Angela Rye and right-leaning talk radio host John Phillips to discuss the political reaction. Even while recalling anti-Trump taunts by the attackers, she still tried to downplay the possibility of the attackers being partly motivated by anti-Trump sentiments which they took out on someone they perceived as being a likely Trump supporter as she turned to Rye and posed:

These four black teenagers -- they bound and gagged this white teenager who has special needs. They kicked him. They cut him. During the course of that, they yelled, "F Donald Trump, F white people." How is that a political persecution story? Or how do you see this?

After Rye condemned the attack and recalled how heartrending it was to try to watch the video, she joined Camerota in seeming confused about why the incident would be taken by some as a politically motivated act:

But I don't understand the political connection except -- but for the fact that they're yelling this. The only connection I can make is because he's a white person, they are upset with all white people because of Donald Trump. While I understand the frustration with the election of this man -- I expressed what my frustrations were throughout the duration of this election -- I don't understand how you would abuse any human being, particularly someone with special needs. It was absolutely disgusting.

Camerota then turned to highlighting examples of conservative websites that might have jumped the gun by being too quick to identify the victim as a "Trump supporter." She began reading several headlines:

Breitbart says, "Chicago PD won't confirm if anti-white torture incident is hate crime." In the article, it goes on to say, "Police officials were hesitant to call the incident an act of hate against the man because he was white, has special needs, and potentially a Trump supporter." So what is this conversation about, John?