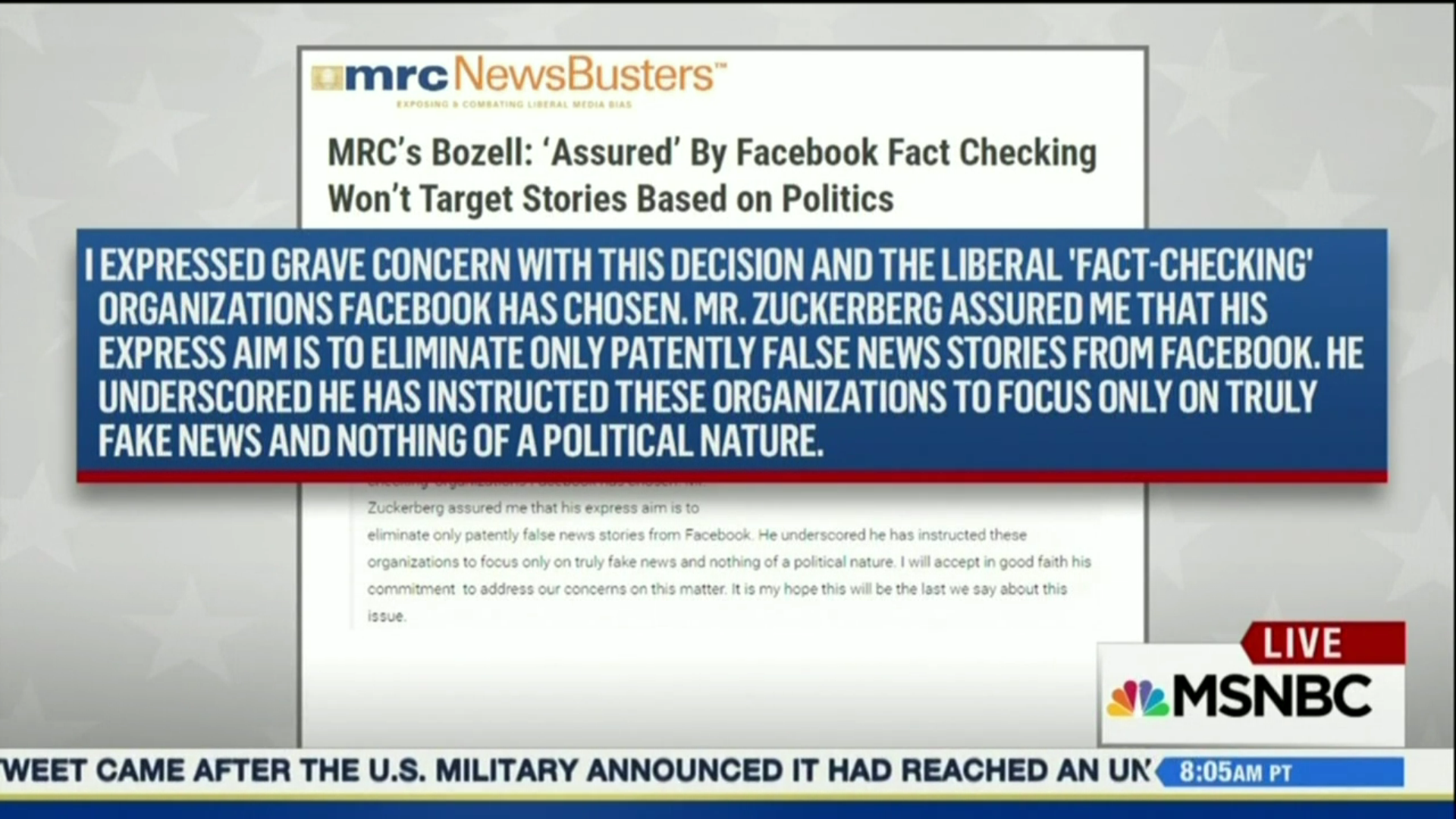 On Sunday's AM Joy on MSNBC, host Joy Reid wrongly claimed that MRC founder Brent Bozell was "essentially challenging" Facebook CEO Mark Zuckerberg to leave the fake news on Facebook. Bozell was somehow "conceding" that "a lot of the things that are put out on the Right aren't real, but he wants them to be prominent in people's [Facebook] feeds."

The graphic on screen quoting Bozell's statement on NewsBusters said nothing like that. Reid was asking a question to former CNN president Jon Klein, who declared that it was "frightening" that over the past 30 years, right-wing media have caused people to distrust "mainstream news organizations."

Shortly after 11:00 a.m. ET, Reid brought up a report by BuzzFeed alleging that more people share stories considered "fake news" than "mainstream news," although she did not divulge that the BuzzFeed report lumped "hyperpartisan news" in with "fake news" to get those results. Reid began:

REID: Doing the work that journalists do is increasingly difficult. There was a recent sort of graph that came out that talked about Facebook engagement -- 8.7 million people engaged with stories that were deemed to be fake news. Only 7.3 million engaged with mainstream news. So right now, proper news is losing the fight with fake news for the eyeballs of the reader, right?

And on top of that, you have conservative outlets -- not just Alex Jones, but people like Brent Bozell who has this media watchdog right-wing group who came out and essentially challenged Mark Zuckerberg of Facebook, essentially sort of conceding the fact that a lot of the things that are put out on the right aren't real, but he wants them to be prominent in people's feeds. So he's concerned that PolitiFact is going to bar his opinion. I mean, do we even have the opportunity to affect people who want to have that at the top of their news feeds?

Reid did not mention concerns by conservatives that Politifact and other third-party groups that would assist Facebook in its fact-checking have a substantial liberal bias, raising doubts about whether they could be trusted to fact-check evenhandedly between right-wing and left-wing news sources.

Klein argued that it is not the fault of "mainstream news organizations" that they are so distrusted, as he seemed to allude to conservative talk radio and Fox News Channel without actually naming them, as being to blame:

KLEIN: Yeah, I think the bigger, more frightening aspect is not so much fake news because a lot of those stories are just so blatant, and they can get knocked down fairly quickly. But it's the seemingly plausible news which we've been subjected to for 30 years now, you know, There are networks that traffic in it. There are radio shows that specialize in it. And that creates this sort of resting pulse rate of skepticism, cynicism, the lack of belief in mainstream news comes about not so much because of the actions of mainstream news organizations, but because that's what the message is coming to millions and millions of people who want to hear it.