Appearing as a panel member on Monday's New Day, CNN's Jackie Kucinich -- also of the Daily Beast -- tried to brush off accusations that Bill Clinton not only committed sexual assaults against women, but that Hillary Clinton took part in threatening the women to keep them quiet, as the Daily Beast Washington bureau chief suggested that such claims come "straight out of conspiracy theory land." It was not until a couple of minutes later that co-host Alisyn Camerota pushed back slightly, recalling that several women who made sexual assault accusations were in the audience.

Just in case you exercised the discretion not to watch last night, the main defense Donald Trump has to what he admitted to doing with his own words, was that Bill Clinton has done worse. Here's that piece.

After three clips of Trump speaking on the issue of the Clintons' mistreatment of women, Cuomo continued:

So Jackie, the irony, right? The irony is that with Bill Clinton you never have him acknowledging any of those allegations. you had Donald Trump in his own words, you know, admitting that he had done the kinds of things he's accusing Clinton of. Does that work with anybody outside the people who will never vote for anyone but Trump? 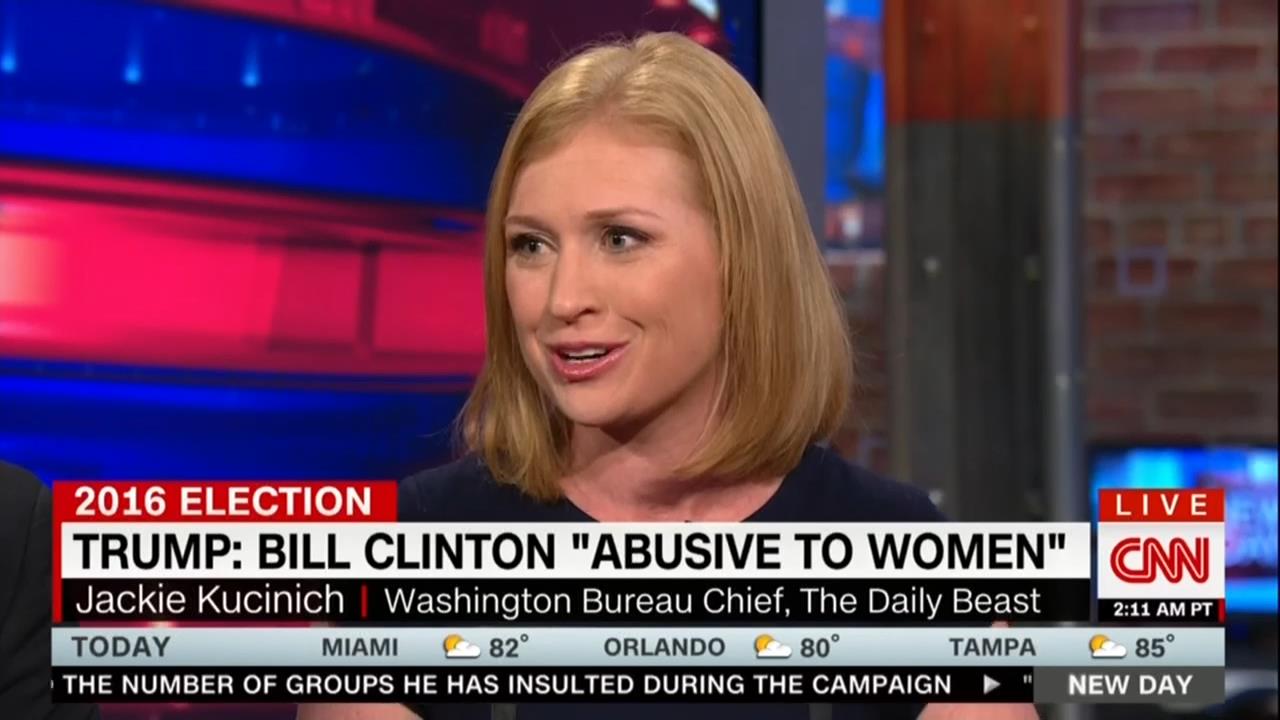 And if you did watch the debate last night, particularly if you were a woman, he interrupted her all night, he loomed over her all night long. And it was kind of creepy, frankly, to watch it. That is an enduring image. I don't know that these allegations that have been thrown around frankly since the '90s are really going to eat into Hillary Clinton (inaudible)

Cuomo jumped back in to muse over the Huffington Post's Howard Fineman describing Trump's appearance in the debate:

Howard Fineman with the Huffington Post referred to him as an "aging orange lion" -- he should have just said "tiger" if he wanted to go with the orange thing -- "pacing behind Clinton all night."

After CNN's Mark Preston recalled that Trump had contradicted running mate Mike Pence on foreign policy in the debate, Camerota finally jumped in and corrected the assertion that the Clintons threatening women was just a "conspiracy theory." Camerota:

We're going to have Mike Pence on later in the program to ask him about that moment. But, Maeve (Reston), I mean, it's more than allegations, Jackie, to be fair. There were three accusers of Bill Clinton's in the audience, and, you know, obviously it was designed to get Hillary Clinton back on her feet. And I did feel that she was rattled in her first answer.