CNN's Cuomo Insists Clinton 'Did Not Do Anything Illegal'

On this Friday morning, CNN has gotten off to an early start in once again playing defense for Hillary Clinton on whether the Democratic presidential nominee broke the law in the mishandling of her email as Secretary of State.

During a debate on CNN's New Day about whether Donald Trump should declare publicly that he no longer believes President Barack Obama might have been born outside the U.S., host Chris Cuomo insisted that Hillary Clinton "did not do anything illegal" on the email issue, and suggested that a Republican guest was accusing FBI director James Comey of being a "liar" by claiming otherwise.

Toward the end of the segment, as Cuomo tried to pressure guest and Trump supporter Boris Ephsteyn to concede that Trump himself should speak out on the birther issue rather than rely on his campaign surrogates, the CNN host posed: "With Hillary Clinton, she had to own the server thing. It was wrong. We heard from all the  people around her that it was wrong, she shouldn't have done it, it was poorly thought out. It wasn't enough. Why?"

As Trump supporter Boris Epshteyn began, "How long after it came out-" the CNN host jumped back in: "This has been going on for years, Boris? This is since 2011 he's been running this pool game."

Epshteyn brought up the illegality of Clinton's email behavior: "And Hillary Clinton -- there's no equivalency. Hillary Clinton did something illegal. She broke the law."

The two then got into a back and forth over whether Clinton broke the law: 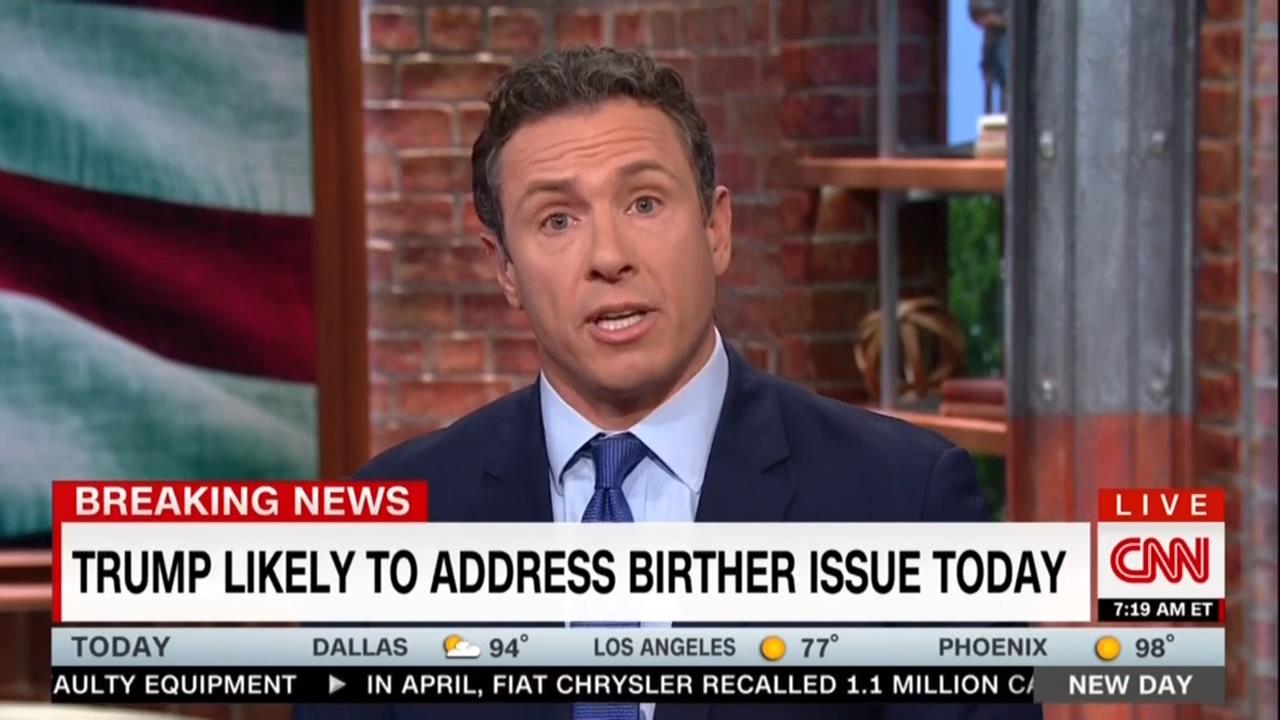 CHRIS CUOMO: She did not do anything illegal.

BORIS EPSHTEYN: Yes, she did.

CUOMO: James Comey's a liar, too?

EPSHTEYN: He said she shouldn't be prosecuted. He did say she acted carelessly, and as a lawyer, if you look at all the particulars of bringing that case, there was a case to bring. And he said so, too.

CUOMO: No, he didn't. He said there's no case that could be brought, there's nothing prosecutable about it. He just said it in his report. He said it wasn't a close call.

Just yesterday, Cuomo hosted PolitiFact's Angie Holan for a segment in which she got to demonstrate that the allegedly unbiased fact-checking group dabbles in liberal spin as she asserted that it was "not right" to claim that Clinton "broke the law," as she leaned on Comey's decision not to recommend prosecution.

And Cuomo was previously admonished on this subject in July by liberal CNN political commentator Carl Bernstein who visibly cringed when the liberal CNN anchor claimed Clinton's behavior was "not illegal."

As for Ephysteyn, he received a similar reaction from Don Lemon on Friday's CNN Tonight as the CNN host bristled at the GOP guest's claim that Clinton acted illegally.

And CNN political analyst David Gregory last week even claimed it is "not in dispute" that Clinton's behavior was not illegal.