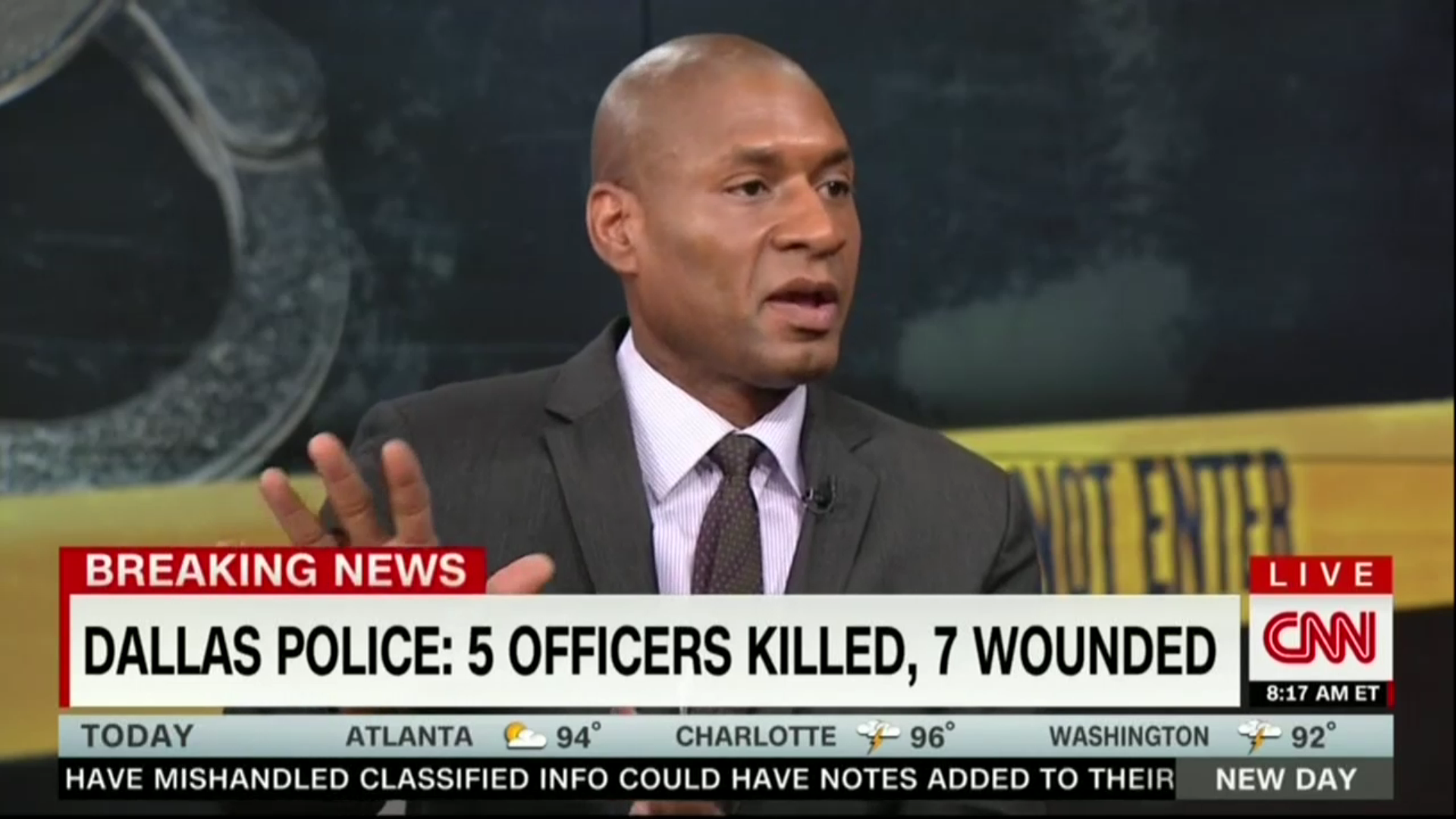 During Friday morning's special coverage of the Dallas police shootings on CNN's New Day, CNN political commentator Charles Blow flew off the handle after a fellow guest involved with a police union complained that "two years of non-stop hate speech against law enforcement" had led to the deadly attack, and accused Blow of having a double standard of not wanting to be political in the aftermath of police officers being killed while doing so after instances of traffic stops that ended up devolving into violence.

Blow, who notably got political Thursday night by questioning open carry laws in Texas, got emotional Friday morning as he repeatedly exclaimed, "I don't even know this man," and declared that he would not "engage in" a political argument.

When Jeff Roorda -- a former Democratic state legislator from Missouri currently involved with the St. Louis Police Officers Association -- expressed his anger against anti-police rhetoric soon after he got his turn to speak:

I'm very sad this morning. I'm appreciative of the heroism of the Dallas police. But mostly I'm mad. And if you think I'm coming on today to participate in this charade where we all pretend like we're surprised that after two years of non-stop hate speech against law enforcement that has culminated in this coordinated deadly attack against law enforcement, you got the wrong guy.

He then took aim at Blow, who had just seconds earlier spoken out against talking politics in the aftermath of the killings, as Roorda added:

When it was Blow's turn, the two got into a tense exchange:

CHARLES BLOW: This is precisely what you don't want to do, right? And I won't in engage in that, right? I don't even know this man.

JEFF ROORDA: Of course you're engaging in it, Charles. You engage in it every time you go on TV.

ROORDA: How dare you compare this planned killing of police officers with traffic stops that go wrong?

After the liberal CNN commentator exclaimed, "I'm sorry. You guys -- Chris (Cuomo), if you want to do this, let him talk. I won't engage in this. I won't do it," co-host John Berman jumped in to calm things down. Blow then continued:

I refuse to try to politicize -- I won't do it. I am going to say this again and again and again. If you were out there protesting because you believe that is about life -- that people have a right to live their lives and not be targeted by anybody for any reason. You believe that for every human being, and I believe that just as strongly for those police officers as I do for anybody else whose life is taken. I refuse to even take part in anything that -- I don't know that man.who's talking. I won't do that.