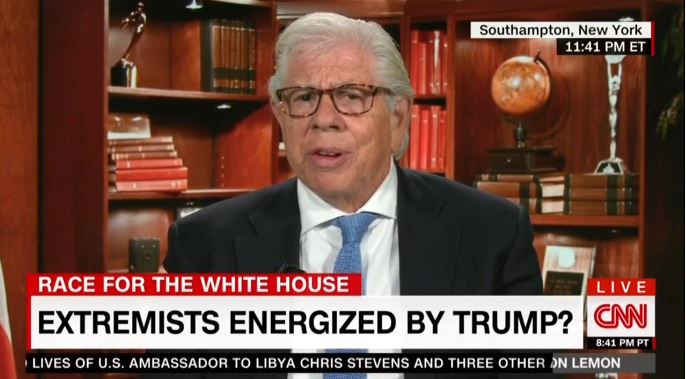 Appearing as a guest on Monday's CNN Tonight, during a discussion of white supremacists who have shown support for Donald Trump, CNN political commentator Carl Bernstein asserted that there are "an awful lot of bigots and nativists and a lot of hateful people" in Trump's coalition as he renewed his charge that the GOP candidate is a "neo-fascist."

Host Don Lemon began the segment by turning to Trump supporter Jason Osborne and posing: "You just heard that white supremacist and extremist groups are being energized by Donald Trump. Why do you think that is?"

After Osborne condemned white supremacist ideology and argued that Trump does not advocate "bigotry," the CNN host turned to Bernstein who responded:

I think Donald Trump is deliberately putting out a racist, bigoted, nativist appeal, as well as a neo-fascist appeal, but it applies and it appeals to more than just racists and bigots. He's also really on to something in terms of understanding the disaffection and dislocation of millions of Americans who have lost their jobs, who have seen their wages stagnant, who have been laid off. And the two things combined are what are propelling his candidacy.

But, yes, would his candidacy be where it is without a message of bigotry and racism and nativism and neo-fascism? No, it would not have taken off like this. But at the same time, we have to give him credit for understanding how disaffected people are in a way that many Democrats, including Hillary Clinton, seem to be unaware of.

I think he's building a coalition, and the coalition includes an awful lot of bigots and nativists and a lot of hateful people, and, at the same time, a lot of people who have been screwed in this economy -- and by both parties.